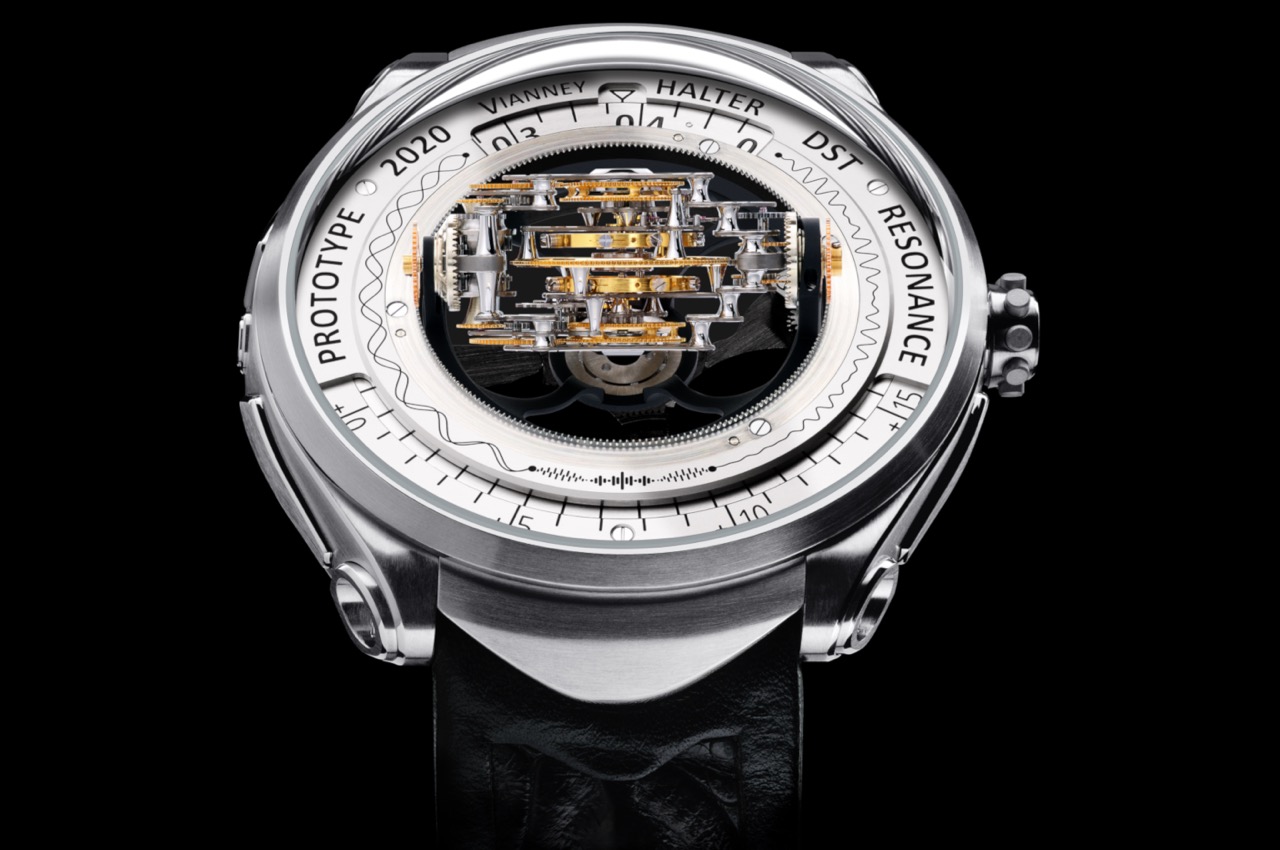 A truly exceptional piece of contemporary haute horlogerie and avant garde design, the Deep Space Resonance by independent master watchmaker Vianney Halter is not only an astonishing technical tour de force, which not only harnesses one of the most elusive phenomena of physics, but also represents the culmination of a personal odyssey, and adds a further element of fascination to a watch which is already an undisputed icon of modern watchmaking.

A watchmaker whose legacy is defined by milestone creations which constantly defy the conventions of design and complexity, Vianney Halter is recognised as one of the greatest proponents of horological innovation and invention of our time. Eccentric and unrestrained by the parameters of mainstream watch design, his timepieces are individual expressions which are influenced by a love of classic science fiction.

Inspired by the pursuit of the mechanical resonance first used in watchmaking by Abraham Louis Breguet and Antide Janvier in the late 1700s, where two independent organs are attracted to the frequency of each other’s oscillations via an invisible force, the Deep Space Resonance is the result of two decades of contemplation and experimentations in acoustic vibration by the watchmaker.

Dominated by the mesmerising animation of a triple axis tourbillon which rotates, revolves and gyrates in a three dimensional mechanical ballet at the heart of the watch, the mechanism features a pair of balance wheels at its centre, which through the synchronising effects of acoustic resonance beat in a unified frequency. One of the more unusual characteristics of Halter’s solution is that once started after winding, the balance wheels may oscillate in either direction, yet still remain synchronised.

The magnificent mechanical centrepiece is comprised of no fewer than 371 individual, hand finished components, which are constructed in a multi-level assembly. Each plane is supported on a series of forty two polished and beautifully ornate pillars. At the heart of this extraordinary piece of micro engineering, the innermost tourbillon cage and balances revolves once every sixty seconds, while the second axis gyrates the entire mechanism through 360º every six minutes, and the third rotates around the dial in a thirty minute cycle.

The time is shown in hours and minutes at opposing ends of the display. The hours and quarter hour markers are on a disc which rotates beneath an arced window at the top of the dial, while the minutes are indicated in a Vernier calliper style solution, where one of the markings on a rotating inner ring aligns with its opposite on a static fifteen minute reference.

Measuring 46mm across and standing 20mm from caseback to the top of its domed sapphire crystal, the Deep Space Resonance is a watch of pronounced character and exaggerated proportions. With its space station styling and charming details such as the VH signature crenelated crown, it is a piece with a commanding presence on the wrist, and one which is unmistakable across a crowded room to any enthusiast of watchmaking in the twenty-first century.

Produced and finished by hand to the uncompromising standards of traditional haute horlogerie, the VH 113 manual winding movement which powers this incredible wristwatch beats at 21’600 vib/hr, and boasts an impressive sixty-five hours from its single barrel spring.

A watch of assured historical significance, the watchmaker envisages a production of only two pieces per year, making this, the Vianney Halter Deep Space Resonance one of the most exclusive and technically fascinating wristwatches of his illustrious career.