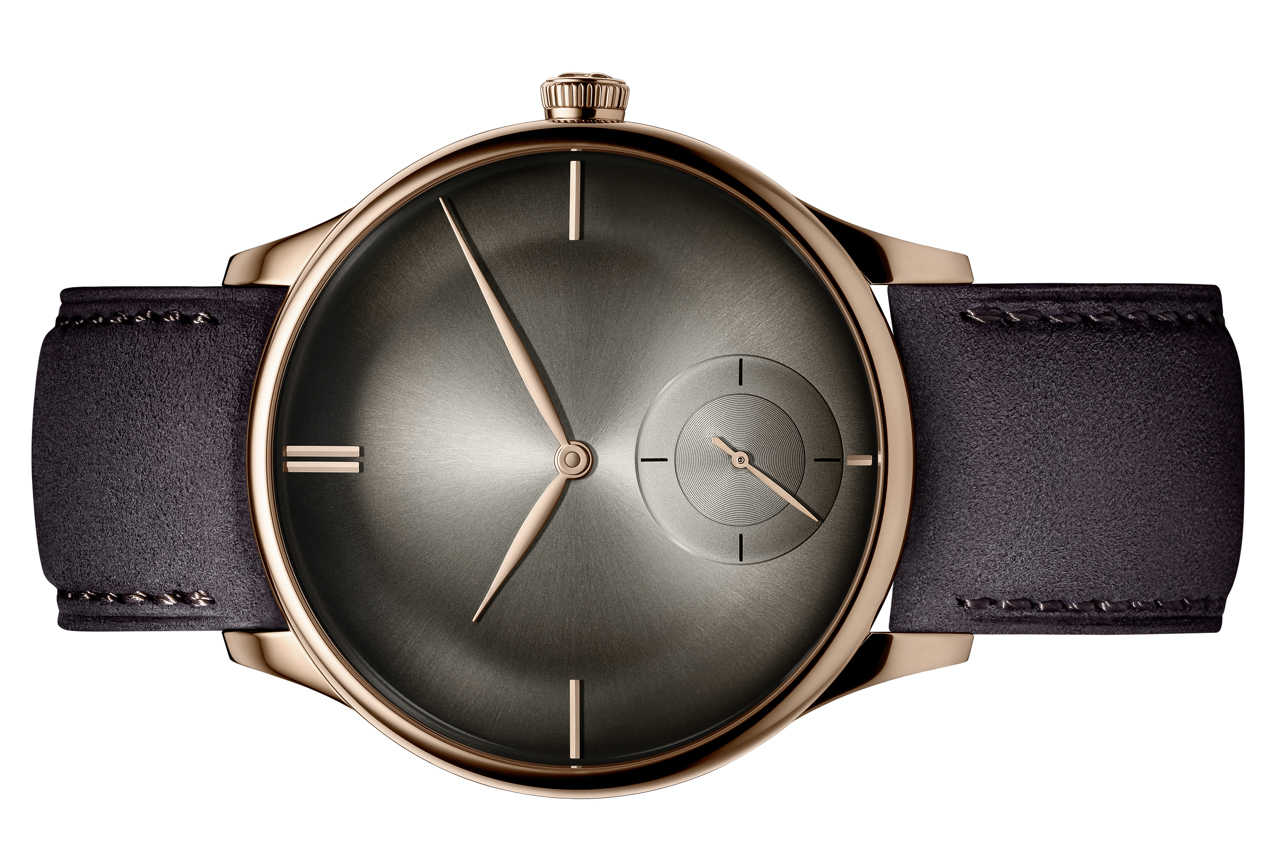 Since its introduction in 2013, the Concept Series from privately owned Schaffhausen based watch company H. Moser & Cie. has been embraced by collectors, enthusiasts and critics alike. Their unique fumé dials being bereft of markings or branding of any kind, its pared back simplicity allow the visual silence to do the talking, and the message loud and clear is that old idiom “Less is More”.

In a defiant stance for 2017, H. Moser have taken this minimalism one step further by removing that one remaining staple which watch enthusiasts have used as a byword for quality; the words ‘Swiss Made’ almost always found on every dial. The reasoning for this is complex, but can be condensed into the brand’s firmly entrenched view that with the newly introduced requirement for a watch to essentially be 60% Swiss to qualify to use the term, H. Moser’s owners feel that such a lowly target devalues the term, and by association watch brands who continue to use it.

However, with the new Venturer Small Seconds Purity a further dimension has been added to these exquisite, hand made watches, by subtly combining design attributes from across their collections, and in such a way that the differences might take a moment or two to become obvious.

Enclosed in a case of 18Kt red gold, and measuring 39mm, the Venturer Small Seconds Purity’s graceful lines and gently convex profile means that it sits lightly on the wrist. The narrow bezel does not intrude, and subliminally directs attention onto the dial itself. Here, H. Moser’s beautiful fumé effect is created in a sunburst in brown, fading from darkness around its edge into misty light at the centre.

Just above the 6 o’clock position, the small seconds display is defined mostly by the outline of its recessed subdial, with only a slight variation in finish and its concentric circular centre offering up minimal contrasting against the rest of the dial.

Stripping the face of all but the very bare essentials needed for displaying and reading the time, the Purity’s only nod to convention, and that subtle evolution from the original Concept Series are the inclusion of quarter hour indices, which themselves are slender and minimal, so as not to interfere in any way with the aesthetics. Elegant leaf hands in satin finished red gold perpetuate the understated sophistication of the piece.

Within beats Moser’s manufacture calibre HMC 327 manual winding perpetual moon phase movement, which is entirely created in house. Viewed through the sapphire caseback, the surface of the movement plates painstakingly hand decorated in Côtes de Genève are revealed, with gold H. Moser crest and detail. The rubies are bedded in mirror-polished chatons, and at its heart is Moser’s own regulating organ and balance with Straumann hairspring, next to the three day power reserve indicator, which is displayed here on the movement side too.