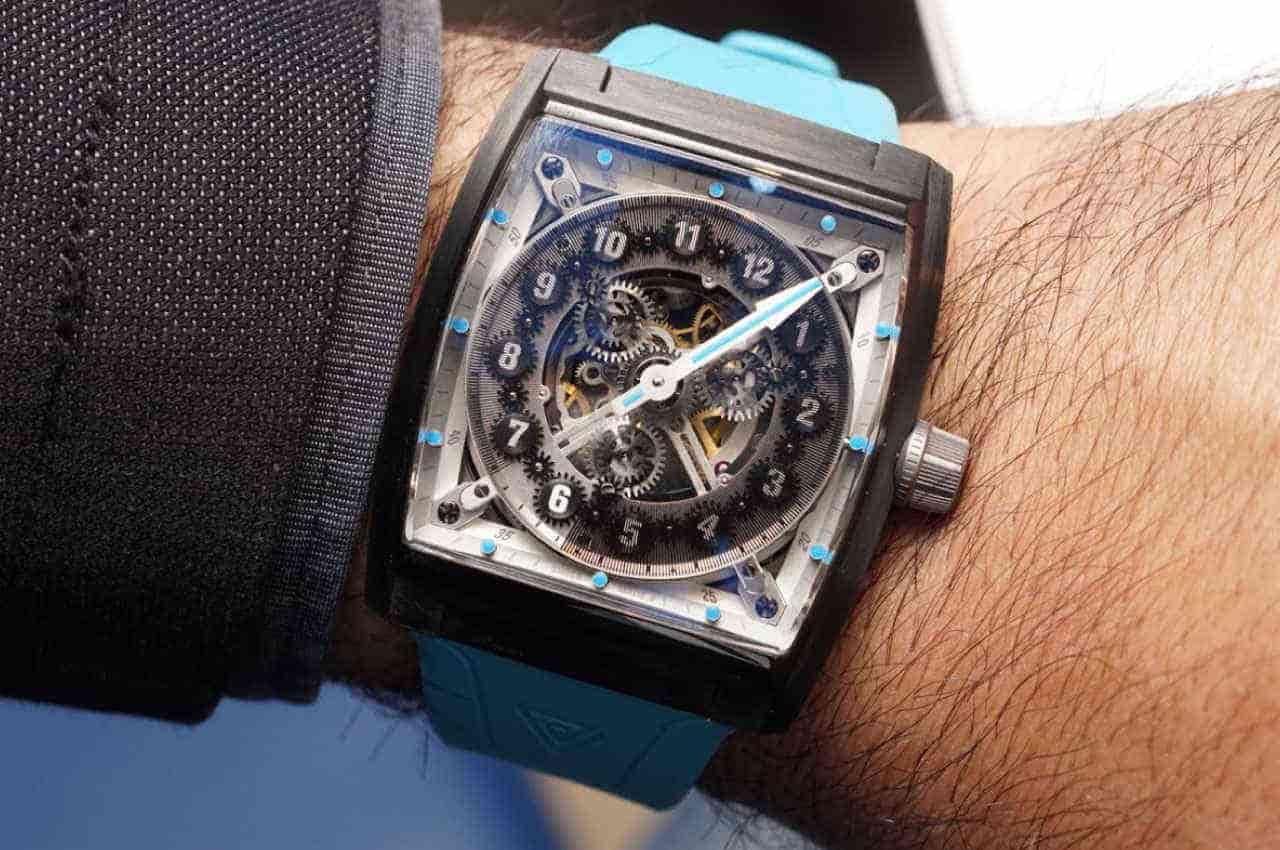 Surely one of the most extraordinary yet intuitive wristwatches of 2018, the V1 by new independent brand Vault has been drawing the interest of collectors and industry insiders wherever it has been shown. Quite literally like no other, its fully rotating mechanism and ever-changing time display present a confounding puzzle at first, but this is an exceptionally well thought out and beautifully executed concept, and once understood, the Vault V1 quickly gives up its secret, yet the irresistible fascination of its profoundly complex engineering will never wane.

Encased in a modern angular tonneau rectangle of brushed stainless steel, and topped with a box-sided sapphire crystal, at 39mm (w) x 46.7mm (L) it has a fantastic presence, and despite what might seem to be large dimensions, is surprisingly compact and comfortable on the wrist.

Beneath the crystal, little is familiar, as apart from the seemingly conventional lone hand which points to the minute markers, it’s a mechanical choreography of perfectly synchronised gear cogs, which rotate and circulate around, beneath a sapphire ring which graduates from clear to a dark shade to accentuate the current hour, as those previous fade into darkness as they pass further away and the disc rotates towards the next.

Twelve black gear wheels are printed with white numerals for the hours, and in what seems to make no sense at first, they are oddly out of position, but that’s because they rotate too, yet because of the smaller wheels which work to maintain a level position around the dial, are always upright, and it’s the graduated disc above which highlights the current hour.

Unlike any other watch, a VAULT timepiece celebrates time setting by redefining the process. While operating the V1 crown the whole movement, the hour indicator disc, and the minute hand are rotated at a fixed rate while a transmission reduction ensures that at the same time the dial is rotated in the same direction at a slower speed (11/12 the speed of the movement). This is not only a truly spectacular way to set a watch, as nearly every part of the watch changes the angle, but it`s also the reason why every VAULT watch changes its appearance whenever the time is set.

After setting the time the whole mechanism is locked and only the minute hand and the sapphire crystal disc indicating the hours keeps on moving.

Uniquely, the mechanism is independent of the case, and in a central container which is fixed by an ‘X’ member with a foot in each corner, attached only to the minutes hand and the crown, where the hours and minutes are adjusted the hours and minutes are adjusted together the entire movement itself revolves through 360°, the movement, and the dial only rotate when the watch is set. Afterward only the minute hand and the sapphire crystal disc indicating the hours keep moving.

The extraordinary technical feat is the result of an immersive, start to finish collaboration with the horologic concept innovators at UhrTeil AG; a specialist company owned by one of today’s most exceptional Master Watchmakers, Andreas Strehler. With four and a half years of design and development, the idea of a watch which could replicate the inner workings of a strongroom door, and reimagine how time can be presented, has painstakingly but spectacularly been brought to this superb reality.

Technical and complex, but ultimately easy to live with and simple to read, the Vault V1 is a quite incredible showcase of contemporary watchmaking. Its three-dimensional display intrigues and fascinates endlessly, thanks to its individuality it’s a real ‘timepiece’ which forms a bond unique to its owner.

A watch with an immense presence in black DLC stainless steel, and featuring vivid blue luminous detailing, Vault V1 is presented on a blue rubber strap.