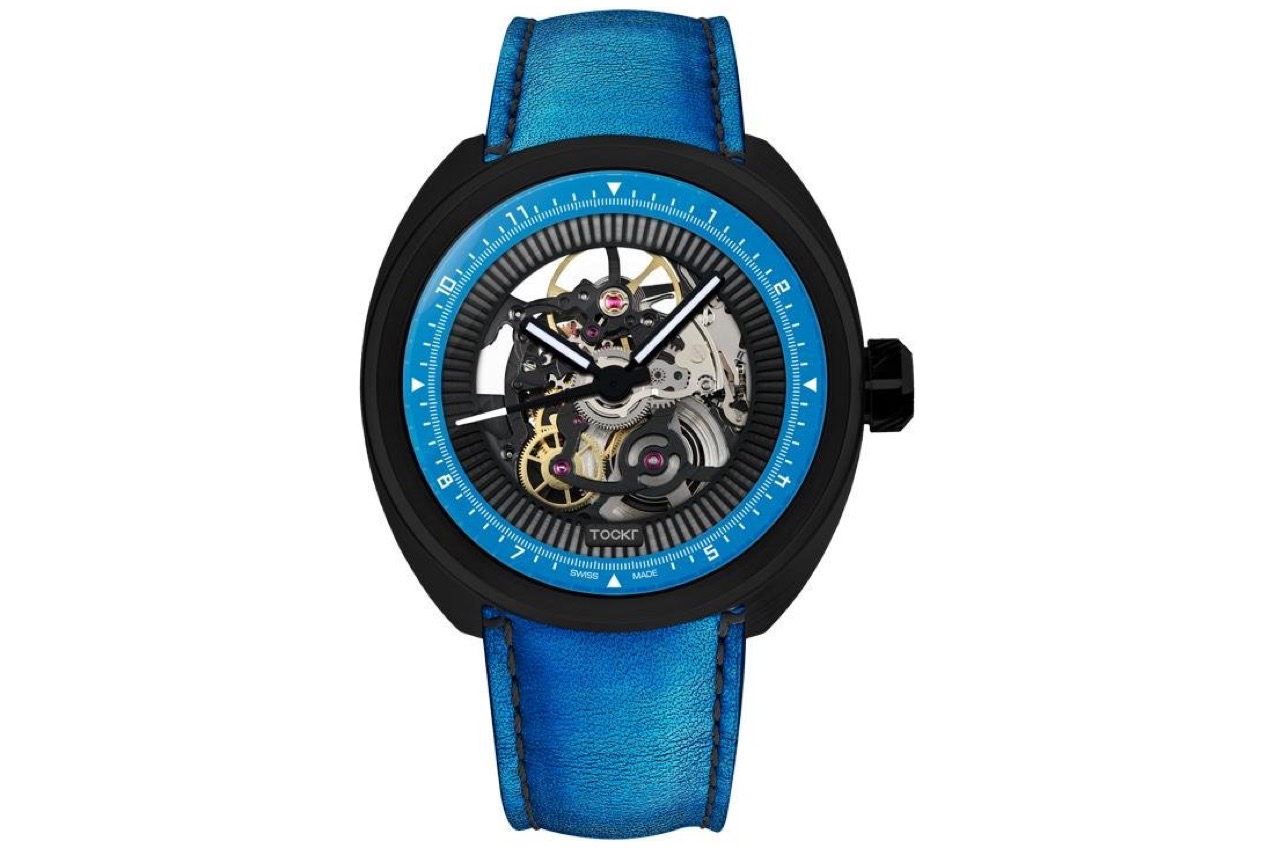 A dynamic model which characterises the aviation-inspired styling codes of this exciting independent watchmaking company, the Tockr C47 Skeleton Hugo Blue Edition brings a vibrant and dramatic colour way to their portfolio. While the piece exhibits superb and unique design touches, it also has a complex character defined by its skeletonised Swiss mechanical movement, which is showcased to superb effect through front and rear sapphire crystal.

Right from their founding in 2017, Tockr watches have been a notable addition to the watch industry. Renowned for their aviation and military inspired models, styled with creative flair and featuring avant-garde nuances, each piece in the Tockr watch collection is powered by a high-quality, precision movement, manufactured in Switzerland to the exacting criteria demanded of Swiss watchmaking standards. Paying tribute to the C47 Radial Engine collection which debuted the company onto the watchmaking landscape, the C47 Skeleton Hugo Blue, limited to just 10 pieces, is an exclusive and impressive edition.

The watch is housed within a cushion shaped case sized at 42mm. Manufactured from 316L stainless steel, its fluid lines have been enhanced with a stealthy coating of black PVD. The crown features grooved indents, which although entirely functional, also lend an eye-pleasing rugged aesthetic to its outline.

Beneath the sapphire crystal, the chapter ring, in an eye catching powder blue carries the indications, which are executed in standout white, offering excellent  readability. Featuring diminutive proportions, the Arabic numerals give the piece a vintage feel, which is inline with the retro characteristics of the cushion-shaped case architecture. Located just beyond this striking feature, a textured grid recalls the radial engine elements of the C47 jet. A synonymous identity code of the C47 models, for this edition, the grid has been blackened and its moody demeanour provides a remarkable contrast to the vivid tone of the chapter ring. Giving excellent visibility even in poor light, the hour, minutes and seconds hands, which are also blackened,  have been inset with pristine white lume.

The central sector of the dial is open, enabling a full view of the Swiss Technology Production STP 6-15 H6 automatic calibre, which has been fully skeletonised. Adding further to the technical aspect of this timepiece, the blackened bridges of the movement appear to blend seamlessly with the radial-style grid, creating an illusory aspect to the facade.

On turning the piece over, one can view the reverse perspective of the calibre. Here, open working on the customised rotor ensures an unobstructed view, and with bright blue engraving upon its darkened finish, the duo of colours which are at the heart of the piece are represented, giving a final design flourish to the edition. Beating at 28’800 vph the movement is good for 44 hours of power reserve when fully wound.

The Tockr C47 Skeleton Hugo Blue Edition is a limited release of 10 numbered pieces and comes presented on a blue calfskin strap secured with a stainless steel pin buckle. A further strap option in silicon is included with every piece.