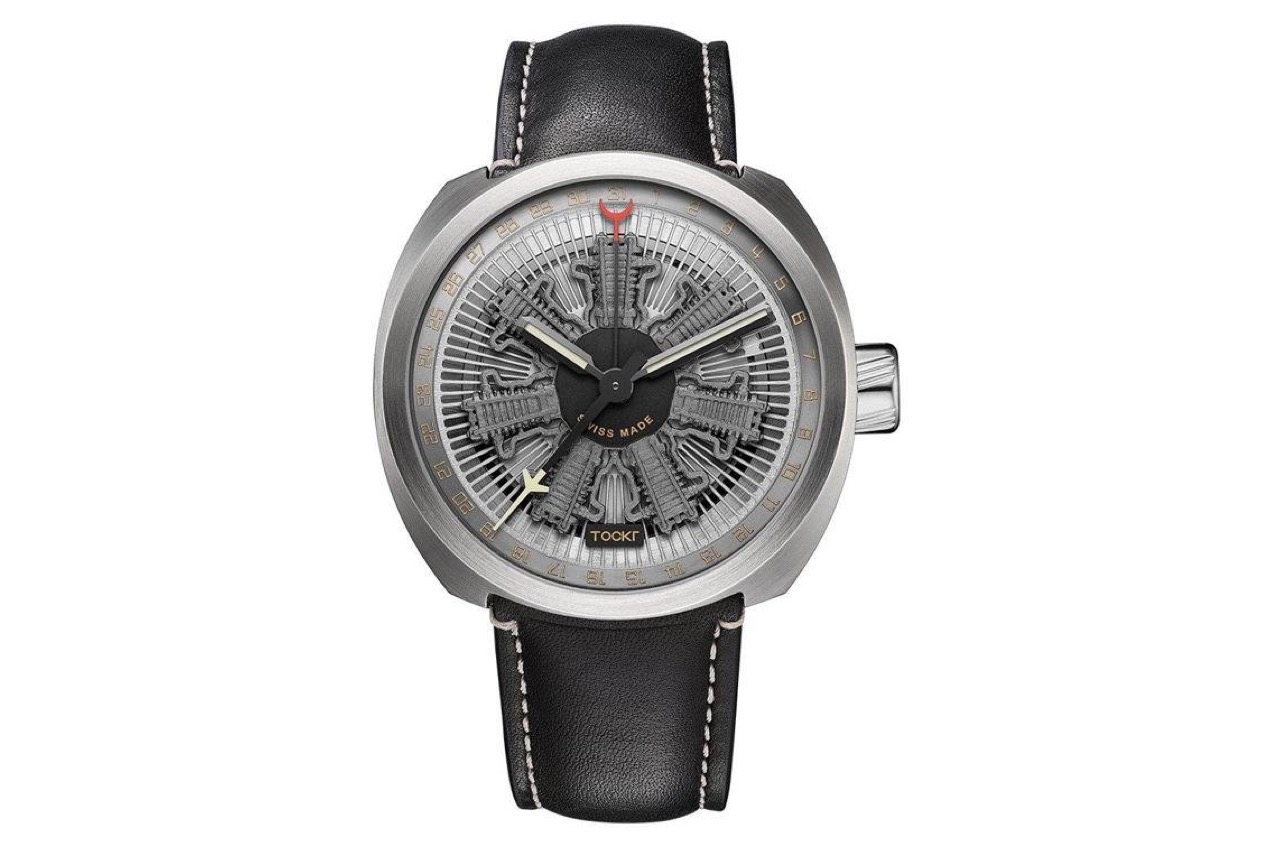 Founded in 2017, Tockr watches have created a new genre within the aviation and military inspired theme. While their portfolio is brimming with adventurous, avant-garde pieces, their watches exhibit impressive attention to detail, and each piece incorporates a high-quality movement, manufactured in Switzerland to the exacting criteria demanded of Swiss watchmaking standards. Named for, and inspired by the C-47 aircraft, this is the only watch series to feature a dial arrangement based on its distinctive radial engine.

The watch is housed within a cushion shaped case sized at 42mm. Manufactured from 316L stainless steel, its carries fluid lines which have been enhanced with brushed and polished finishes.  The crown features grooved indents, which although entirely functional, also lend an eye-pleasing rugged aesthetic to its outline, and it is topped with a subtle turbine-like engraving.

Beneath the sapphire crystal,  the profile of a C-47 radial engine dominates the dial. Giving the entire facade an extraordinary three-dimensional aspect, its structure has been cast in bronze, then finished in dark grey, adding a dramatic aesthetic.  Rising up high from the centre, the hour and minutes hands are baton-shaped and feature lume insets for readability in poor light conditions, while an aircraft-tipped seconds hand, also finished with lume, encircles the dial. On the outer dial, a beautifully executed date ring takes up position, and from the centre, the pointer date hand reaches out to indicate the date of the month with a vivid red crescent-shaped tip.

The piece is powered by a Swiss self-winding calibre, manufactured by Leschot, with customised hand height, to accommodate the radial dial layout. Beating at 28’800 vph, it has a power reserve of up to 42 hours when fully wound, and its water resistance capability of up to 50m, will give its wearer the added assurance and robustness required of a daily wear timepiece. The C47 Radial Gun watch has a character which is indicative of the innovative approach to watch design which is synonymous with all Tockr collections, however the piece is also abound with clever styling touches and subtle details.

Displaying a dial which has a superb technical aspect and depth, together with a case profile exhibiting fluid lines and contrasting finishes, it is a remarkable timepiece with a powerful presence on the wrist. The Tockr Radial Grey watch comes presented on a black calfskin leather strap secured with a stainless steel pin buckle.