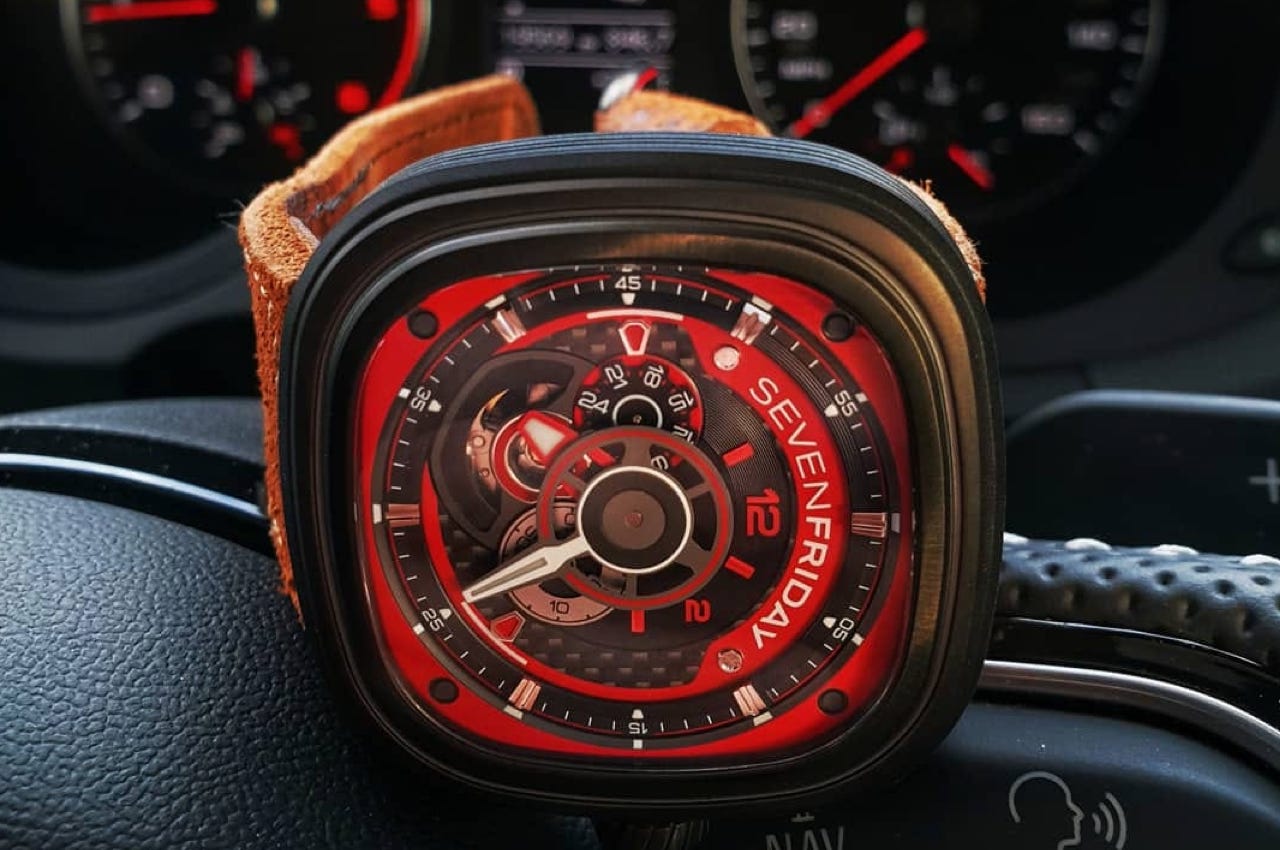 Youthful, dynamic and fearless, SevenFriday is a quite unique watch company which embodies modern popular lifestyle culture, and whose watches are the realisation of a philosophy which grabs life by the horns and lives it to the max. Crammed with detail and imaginatively laid out, each SevenFriday is instilled with a sense of fun and adventure.

Outgoing in its styling, and completely uncompromising in its personality, the new P3B/06 Racing Team Red by SevenFriday is a watch from which there is no hiding place. One half of a two-part edition of racing-inspired models it lines up on the grid alongside its ‘rival’ Team Yellow and with its complex, brightly coloured cutaway dial, and big off-square case in black gunmetal PVD stainless steel, it packs enormous presence on the wrist.

Under a mineral crystal with anti-reflective coating, the dial is constructed of five individual layers of alternating red, gunmetal PVD and carbon fibre, creating a cool three-dimensional look and partially exposing the movement within. The hours and minutes hands resemble a racing wheel with the minutes as the hub and the hour pointer on the rim, and beneath, at its centre a black one-third dial features red hour markers and numerals, before ending where the small seconds disc overlaps at the four with a 24-hour disc at the nine. In between the discs, a small aperture provides a glimpse of the balance beating away inside. It’s surrounded with a panel of carbon fibre and the nameplate with the black grooved minutes' ring featuring applied indices just above.

The P3B/06 Racing Team Red comes in a 47mm off-square of dark gunmetal PVD, with rounded corners and a black silicone rubber animation ring around the waist of the case. The bezel is finished with a brushed sunburst and although overall the watch is certainly large, with the black silicone rubber strap with stitched red leather paneling it’s still comfortable and eye-catching on the wrist.

Inside, a Japanese Miyota automatic self winding movement is reliable and beats at 21’600vph and is closed in behind the screwed down caseback which features the signature SevenFriday motif indicating the technical breakdown of the watch, as well as the origin of its design (Switzerland), case and components (China) and the movement.