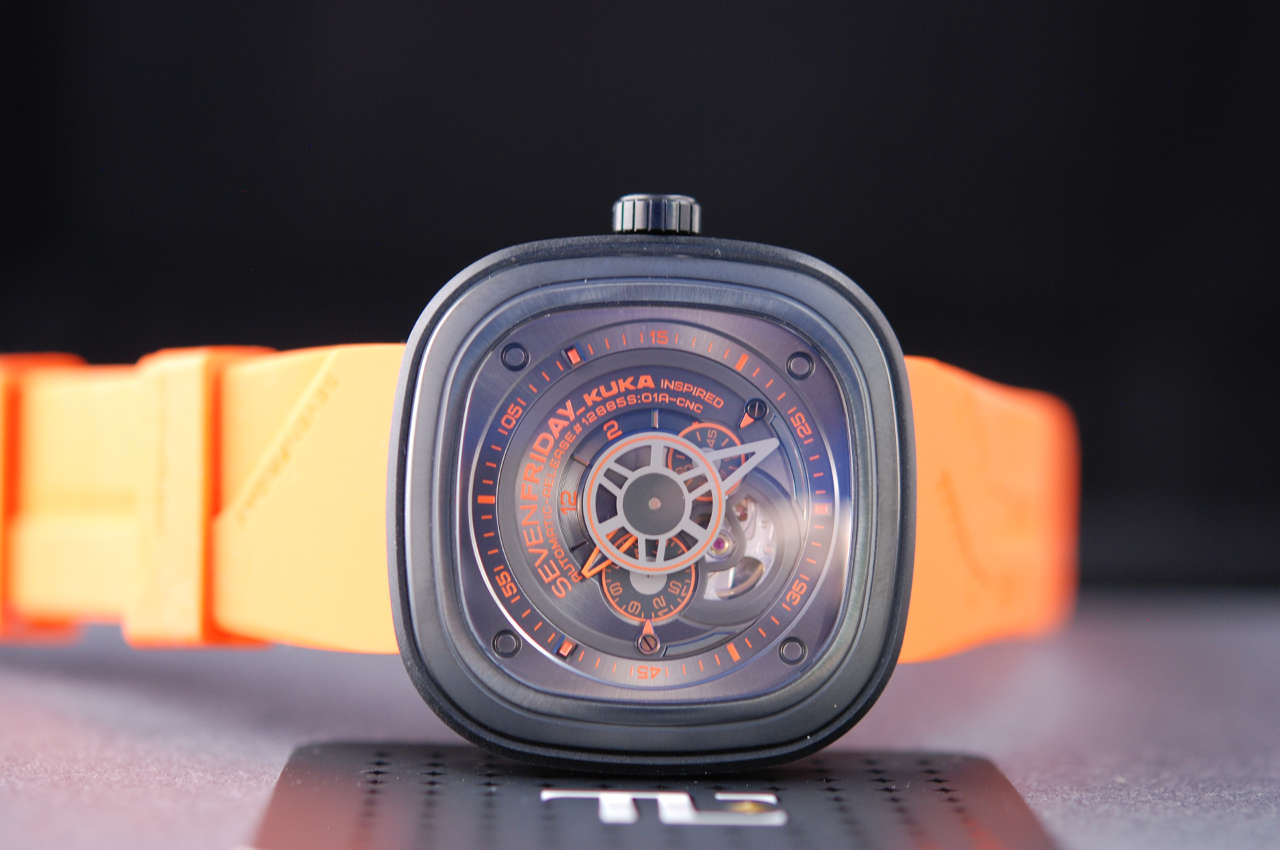 The rise of the SevenFriday watch company has been nothing short of spectacular. Since making its debut in 2012 the privately-owned upstart brand has connected with its target audience with an efficiency like no other, and already has a huge youthful cult following, thanks to its ultra cool designs, viral brand image, value and accessibility.

The new SevenFriday P3/04 Kuka is named after the automotive industrial Robot systems a recent relationship between the watch company and industrial robotics leaders Kuka, whose vivid orange signature colour provides the theme for the new 2016 model.

At first it might seem an odd pairing, but SevenFriday cite industrial and mechanical design as influences for their entire range, and in particular the precision machines made by Kuka Robotics in Germany have left a lasting impression with the watch designers.

The P3/04 Kuka is presented in an impressive 47mm stainless steel case which is square in shape, but with rounded corners and tactile silicon ‘animation ring’ with a series of grooves which flow around its flank, and so there are no sharp edges. The case has been finished in an all black PVD coat, which combines with the orange dial features to create a striking contrast.

Beneath the expansive sapphire crystal the traditional dial is dispensed with instead an open, multi layered arrangement in gunmetal grey with a mix of polished, matte and brushed finishings making a three dimensional display of the indications and some of the mechanics within.

A large skeletonised disc at the centre of the face continues the industrial feel and is the base for the minutes pointer, behind which the shorter hour hand shows. The small seconds and second time zone are represented on discs at the 5 and 9 o’clock positions respectively.

The underside reveals the lugless strap seats and the stainless steel caseback which sports an etched ‘infographic’ style breakdown of design and component locations, the SevenFriday motif and impression of a Kuka industrial robot.

The watch is powered by the trusty Miyota 8215 automatic self winding movement with 40 hour power reserve. Water resistant to 30m, it is presented with a choice of orange or black natural rubber strap with steel PVD tang buckle.

The SevenFriday P3/04 Kuka Inspired edition is a really cool lifestyle watch, and like its siblings it breaks the mould in terms of what you get for your money, and at The Limited Edition we are pleased to offer this fabulous watch, brand new, unworn and complete with official SevenFriday warranty and ‘Fresh off the Press’ stamped wooden crate.