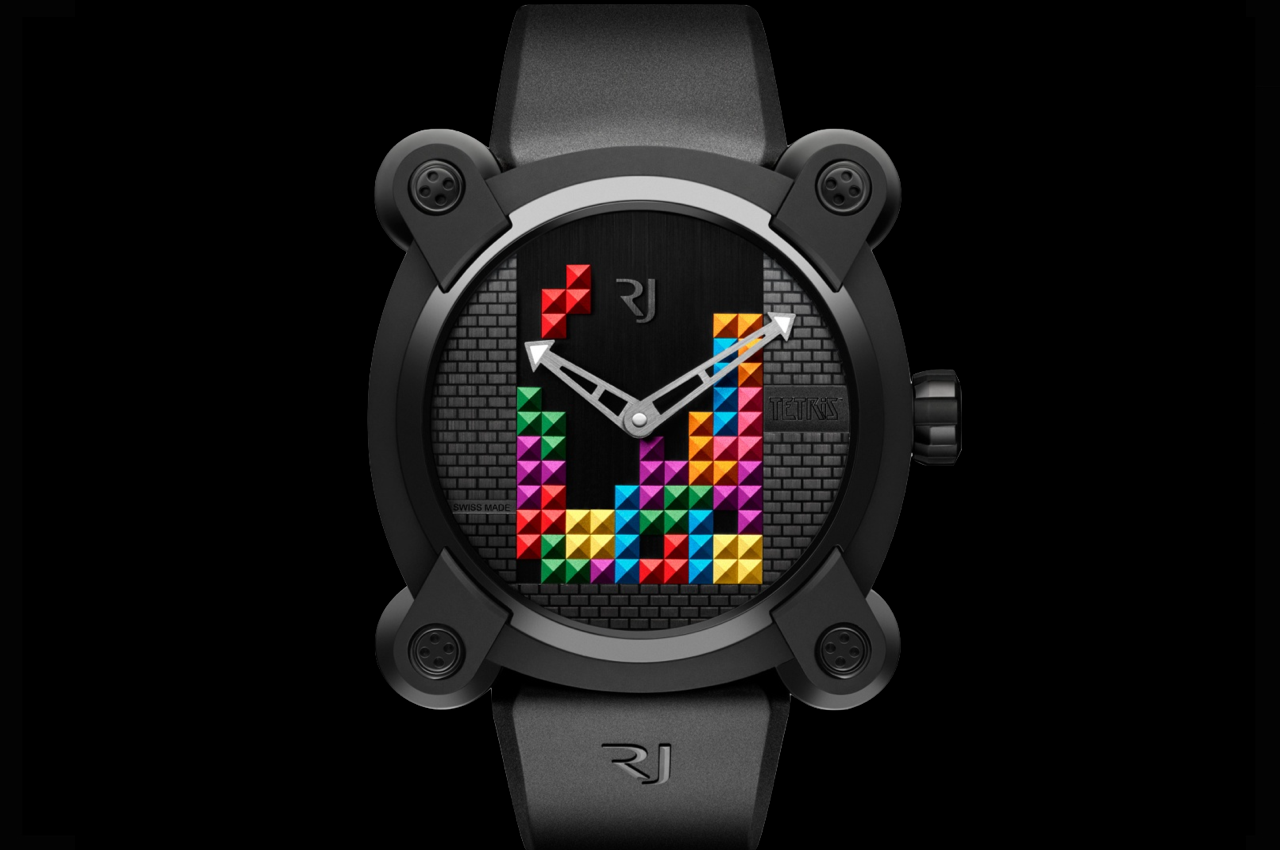 From the Generational Icons collection the Romain Jerome Tetris-DNA Limited Edition is a superbly detailed high-end love letter to one of the 1980’s most iconic and best loved electronic challenges which presaged the birth of the Atari and  Game Boy phenomena, upon whose tiny basic stage it would enjoy its greatest successes.

Created in 2014 to celebrate thirty years of the absorbing small screen sensation, and in collaboration with its creators Tetris, the Romain Jerome Tetris-DNA is instantly recognisable to its legions of fans with its true-to-life representations of its little geometric tiled graphics in a cool and colourful tribute.

What at first glance might seem like a fan-oriented frivolity soon reveals its true persona, as behind the Tetris’ theme, with its distinctive iconology and obvious nostalgic novelty allure, lies a very serious and beautifully engineered piece of high end watchmaking, and a closer inspection reveals hand crafted detailing on a minute scale throughout.

Dominating the scene is a sequence from the Tetris puzzle, frozen in a 3-dimensional display of colour and stacked pyramidal Tetraminos. Manufactured in Clou de Paris in aluminium, and anodised to accentuate its vibrant metallic colours, each one is carefully gem set by hand onto the black dial, framed either side by walls of grey brick, and creating a captivating light catching effect. The familiar RJ pylon-like black oxidised hands are tipped with Super LumiNova which glows an icy blue in low light.

The 46mm case has been manufactured in titanium with black PVD coating; the bezel further polished to a sheen for contrast, and its protruding lobes form the watch’s distinctive X shape. Here the screws which secure the case elements together are mobile, thanks to an ingenious pivoting ball and socket innovation on the underside, and are coated in Teflon ensuring a supremely comfortable wear.

The caseback piece is scalloped at each corner to accommodate the fixing screws, and features a small medallion with the Tetris icon on a ‘stellar’ pattern background with coarse grainy base, and inside beats the RJ001 automatic self winding movement. It is presented on a black vulcanised rubber strap with folding clasp in PVD coated stainless steel.

The Romain Jerome Generational Icons series has tapped into a dynamic cult niche of grown-up collectors with emotional associations with its themes, and with a production of just 84 pieces worldwide in tribute to the year of its release the Romain Jerome Tetris-DNA Limited Edition is the ultimate in exclusive collectables for those whose ears still prick up at the sound of the game’s simple electronic soundtrack.