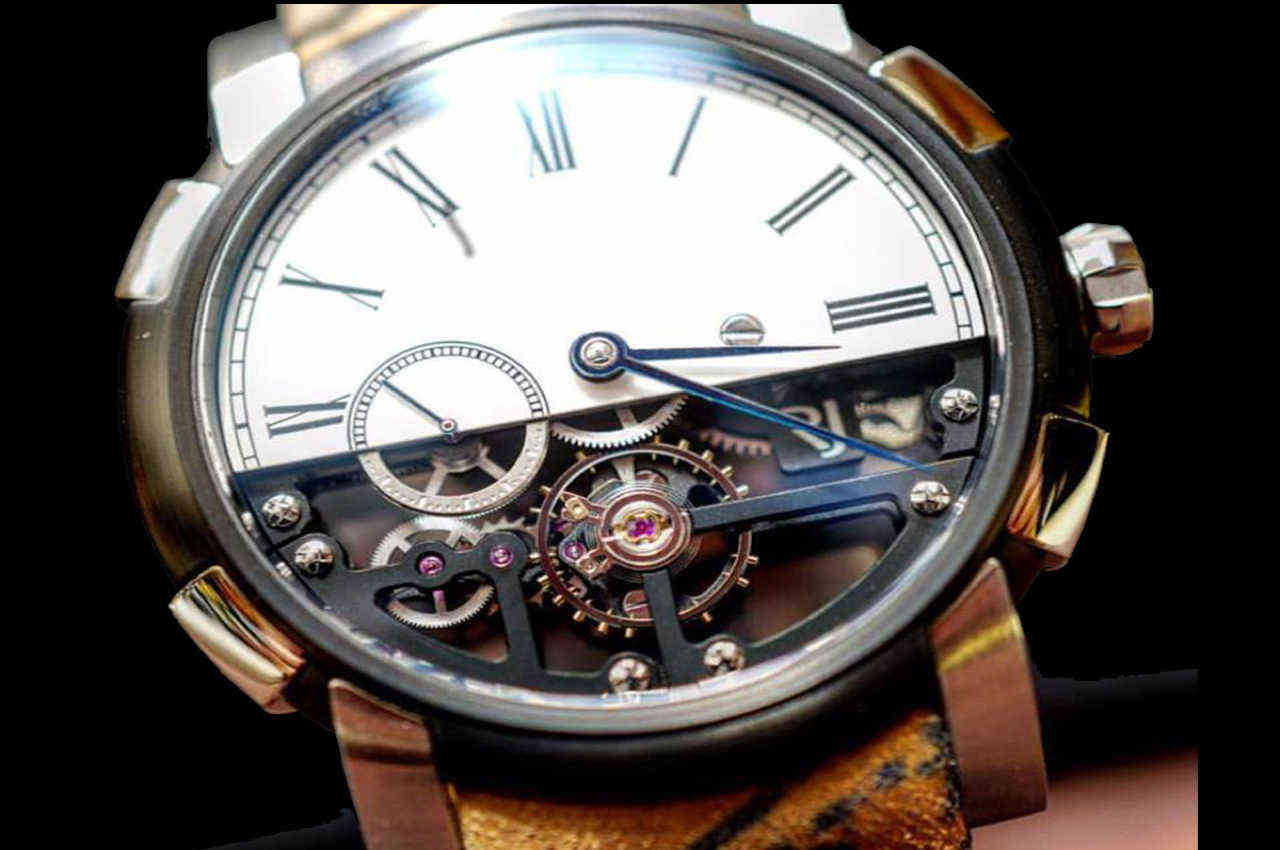 From the Artistic Icons collection the Romain Jerome Tattoo-DNA Xoil Limited Edition is no exception to that unwritten RJ house rule. The second collaboration with a high profile tattoo artist, the Xoil edition is a stunning fusion of contemporary design with a truly classic watchmaking flavour.

Presented on a tattooed calfskin strap the Tattoo-DNA Xoil is instantly eyecatching with its unusual clipped dial revealing a delightful mechanical arrangement which is almost steampunk in its effect.

A 44mm case is a contrast of light and shade with its muted silvered tones of satin finished steel lugs, crown and ‘paws’ complementing the black pvd of the bezel and case. The face too has a vividly contrasting appearance; its upper portion is a beautiful half-dial of sheeny white grand feu enamel with jet black printed roman numerals, until it is quite literally cut short by high pressure water jet to allow the horology beneath to share the limelight.

As with the rest of its components, the visible black chrome movement plate has been skeletonised so as only the fundamental anchorages remain; the balance and escapement seemingly occupying an airy chamber of personal space.

Detailing includes the oxidised blued steel hands which are shaped like the tattooist’s needles, and add a subtle hint of this delicate colour to the dial. The small seconds dial straddles the divide and the printed minutes track on the enamel gives way to a brushed steel rim below.

Through the transparent exhibition caseback the manual winding movement can be fully appreciated. It is a bespoke calibre from long-time technical partner Concepto, and for the Tattoo-DNA Xoil, it has been completely reduced to its barest form with angular bridges, stripped back geartrain wheels and open barrel, is a beautiful piece of mechanical workmanship.

Based in his studio in the south of France, Xoil has emerged as one of the world’s most gifted and creative tattooists. In fact his works stand alone thanks to the artistic realisations of mythical creations integrated with pop-art styling, and for the Tattoo-DNA Xoil edition, the artist created five sets of works on sections of beige calfskin leather, with each work then separated into five individual straps, meaning no two can be the same.

This incredibly beautiful piece is also one of great rarity, as only twenty-five pieces have been produced. Confident in the knowledge that they do not make watches for a mass audience, once again Romain Jerome has successfully brought together apparently unlikely bedfellows to create a watch of real technical intrigue and truly eclectic appeal.