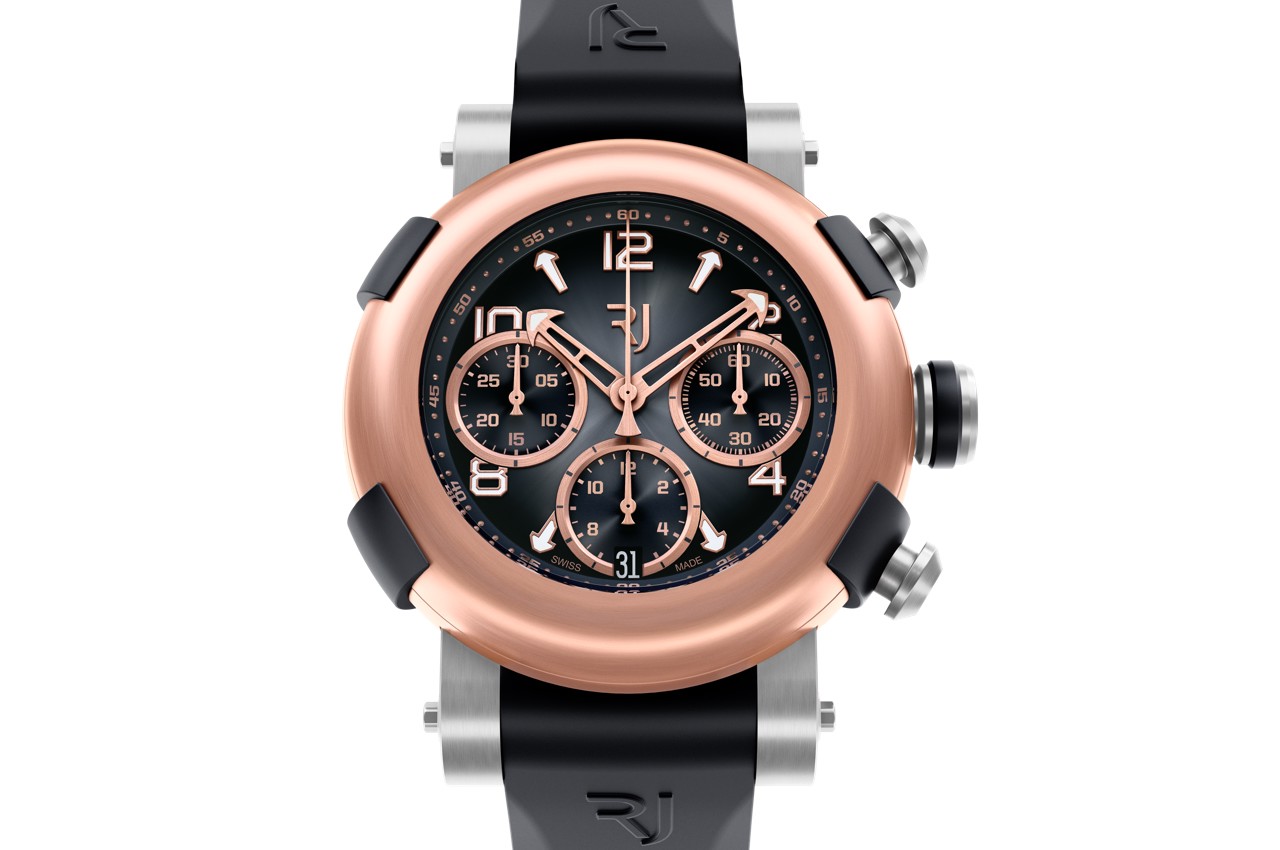 Never having quite gone away, the brand once known as Romain Jerome is back with a new RJ identity which heralds a new era for a company which has made its mark on the independent sector with its strong design codes, super rare materials which have come from outer space or from the floor of the Atlantic where the Titanic rests, and even heroes of the comic book and gaming worlds. Sometimes zany but always interesting and popular, the brand has a distinctive DNA and as RJ it remains intact.

Leading the new era comes the RJ Arraw collection; by previous standards a ‘simple’ sporty chronograph with restrained modern styling and a less eclectic, more accessible appeal which takes the brand confidently into mainstream territory. Going back to the very basics of the aesthetics on which its foundations were built, the Arraw is still big and bold, imposing with pronounced features, yet curvaceous, refined and crisp, while still coming from an unmistakable bloodline.

Measuring 45mm across the Arraw is certainly not subtle, but and the round titanium case features four black rubber pawls into which the rivet-like chronograph pushers are integrated either side of the crown. The smooth matte finish of the case and bezel gives it a pebble-like profile and the lugs emerge from within the sides.

Underneath the sapphire crystal, the dial graduates from light grey to full black from the centre outwards, with a clear lacquer coat adding depth, and it features applied roman numerals alternating with arrow tip hour markers, which like the hands are accentuated with powerful Super-LumiNova, so legibility is good in daytime or night. Three subdials are recessed with silver rims to display the small running seconds at the three, with 30-minute and twelve-hour chrono totalisers at the 9 and 6, where the date window is also discretely incorporated.

On the underside, a sapphire glass reveals the self-winding RJ2040 movement, which boasts a power reserve of 42 hours at 28,800 vph.

With its oversized proportions and contemporary styling, the RJ Arraw is a watch with an outgoing and sporty character. It is presented on a black rubber strap with folding titanium deployant clasp, and despite its size, fits all but the slimmest wrists with comfort.