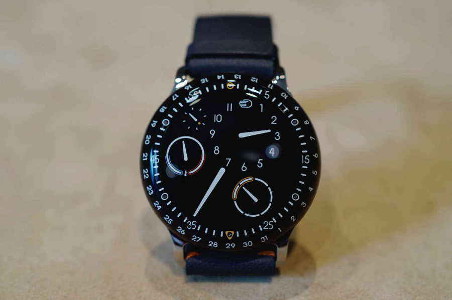 In the world of fine watchmaking, an incredible pace of innovation is a constant source of fascination to collectors, as watch companies experiment with concept mechanicals, futuristic materials and avant garde design.

It is however not very often that a small, upstart brand begins its life in the limelight by throwing away the rule book and reimagining time itself, yet from the unlikely location of Antwerp in Belgium, one such company have done just that.

From its debut at Baselworld 2010, Ressence have been beloved by the critics and snapped up by collectors thanks to an holistic approach and a background of industrial design inspiring truly groundbreaking watchmaking, and a collection whose signature trait is the cool rotating dial and inner displays, and pointers which float, unconnected to any axle or pinion.

The Ressence Type 3 is a genuinely stunning piece. With lines as smooth as a skimming stone, it is a watch of two halves as the case is created by domed front and rear sapphire crystals, which curve to meet at the titanium chassis, forming an airtight seal, and separating the mechanical movement from the display above.

Using the illusion of distortion caused by light refraction and a convex dial, this effect is further brought to life by filling the void between dial and crystal with oil, which in turn creates the sensation of projecting the orbiting timing functions onto the sapphire in a spectacular eyecatching animated motion.

Ressence have dispensed with formal hands as we know them, and instead the indicators are printed onto satellite discs, each one rotating within the 60-minute rotation of the dial’s main element on which the minutes pointer is printed. Housed within this base, the largest of three individual subdials displays the hours, with small seconds in another.

The calendar functions are beautifully executed with the week day illustrated in the third dial, its pointer sweeping across the course of the day from midnight to midnight, and the weekend indices in outline, meaning the other days are instantly clear, despite the lack of text. Around the lower rim of the crystal the date rotates, aligning with the orange arrow at the 6.

Absorbing in daylight, it is dramatic in low light conditions, as all principal markings and pointers have been printed in vivid blue Super LumiNova, which combined with the effect of the oil transforms the face into a cool glow.

With no crown to interrupt the contours time and date adjustments are performed via the rear of the case with the entire sapphire rotating to set the functions.

Safely sealed away from the oil, the automatic movement has been radically modified to accommodate the dial’s rotating discs, using an ingenious magnetic transmission which ‘invisibly’ connects the movement to the gearing of the functions above.

Slightly extending lugs are almost like handles and give the shape of the watch priority when strapped to the wrist on the Barena leather strap with ardillon buckle.

The watch is supplied brand new in box with full Ressence manufacturer’s warranty and all accompanying documentation.