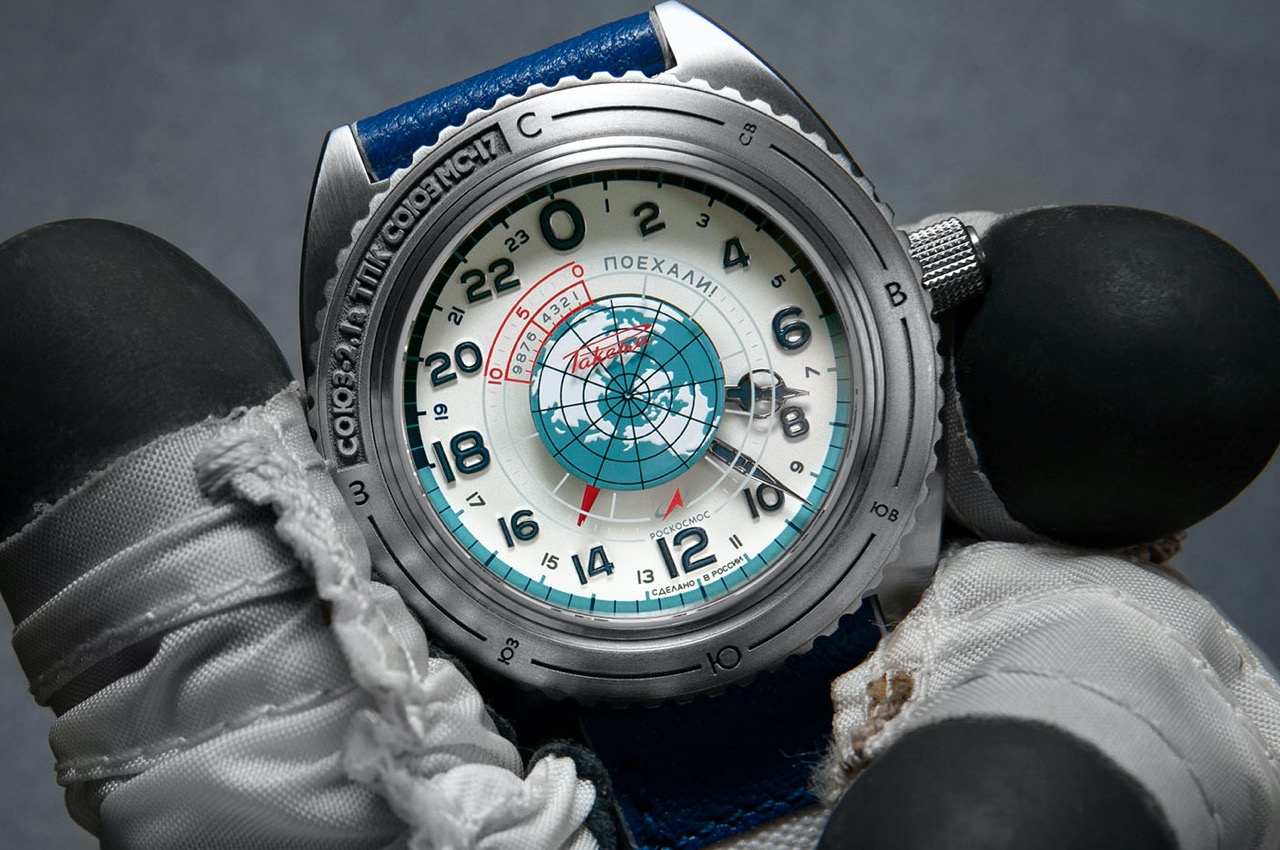 A watch which pays tribute to the men and machines of the Russian space programme, the Space Launcher by Saint Petersburg based watch manufacturer Raketa is a fabulous and eye catching piece with an authentic connection with space exploration.

Developed in close collaboration with Roscosmos, Russia’s space agency, the Raketa Space Launcher is certainly unique in many ways. Manufactured using materials recovered from actual equipment used to send its Soyuz 2 rockets into space, as well as a strap made from a space-worn cosmonaut’s suit, it is a watch which encapsulates man’s fascination with space.

Featuring a twenty-four hour time display, which, in an environment such as the ISS, which witnesses sixteen sunrises and sunsets in every twenty-four hour cycle, is the single most important requirement of a cosmonaut’s wristwatch, the Raketa Space Launcher is designed as an instrument for extra terrestrial living, while being a cool piece of wristwear for those of us on Earth, who can only look up at the clear night sky and wonder what it must be like.

Beneath the sapphire crystal, the white dial features dark blue numerals, which in low light transform into a vivid blue luminous glow. The hour and minute hands, whose shapes are inspired by Russian rocket design, are also treated with luminous material, to ensure optimal legibility at all times. At the centre of the dial, a blue and white map of the northern hemisphere, with the North Pole at is centre, rotates above a clear disc on which the Raketa and Roscosmos motifs are printed, with a red pointer indicating the seconds.

Measuring 43mm across, and manufactured in stainless steel, with a fine brushed finish, the Space Launcher has an impressive presence on the wrist. The watch gets its name from the unique material used in the production of its rotating bezel, which is actual metal recovered from the Soyuz-2.1a space launcher, from the Soyuz MS-17 spaceflight which lifted off, on its record breaking three hour journey to the ISS, on October 14, 2020. The metal is machined by hand and then laser etched with Soyuz-2 and MS-17 commemorative engraving.

Adding further authenticity to this incredible physical link with Russia’s space programme, the watch is presented on a strap which is manufactured by hand, using fabric from a space-worn Sokol cosmonaut’s flight suit. To preserve this piece of history, it is accompanied by a second leather strap, which is quickly and easily switched, thanks to a quick release lever.

On the underside, a mineral crystal exhibition caseback reveals the Raketa 2624a self winding movement, whose bridges have been decorated with laser etched constellations. The oscillating weight is finished blue pvd, with red and white lettering completing the Russian national colours. Beating at 18,000 vib/hr, the mechanism is wholly manufactured in the Raketa workshops in Saint Petersburg, and has a forty hour power reserve.

A very cool watch with a historic connection to Russia’s continuing exploration of space, the Raketa Space Launcher is manufactured in a 300-piece limited edition, and comes with a woven patch, commemorating the MS-17 space flight, as well as a certificate from Roscosmos, verifying the authenticity of the set.