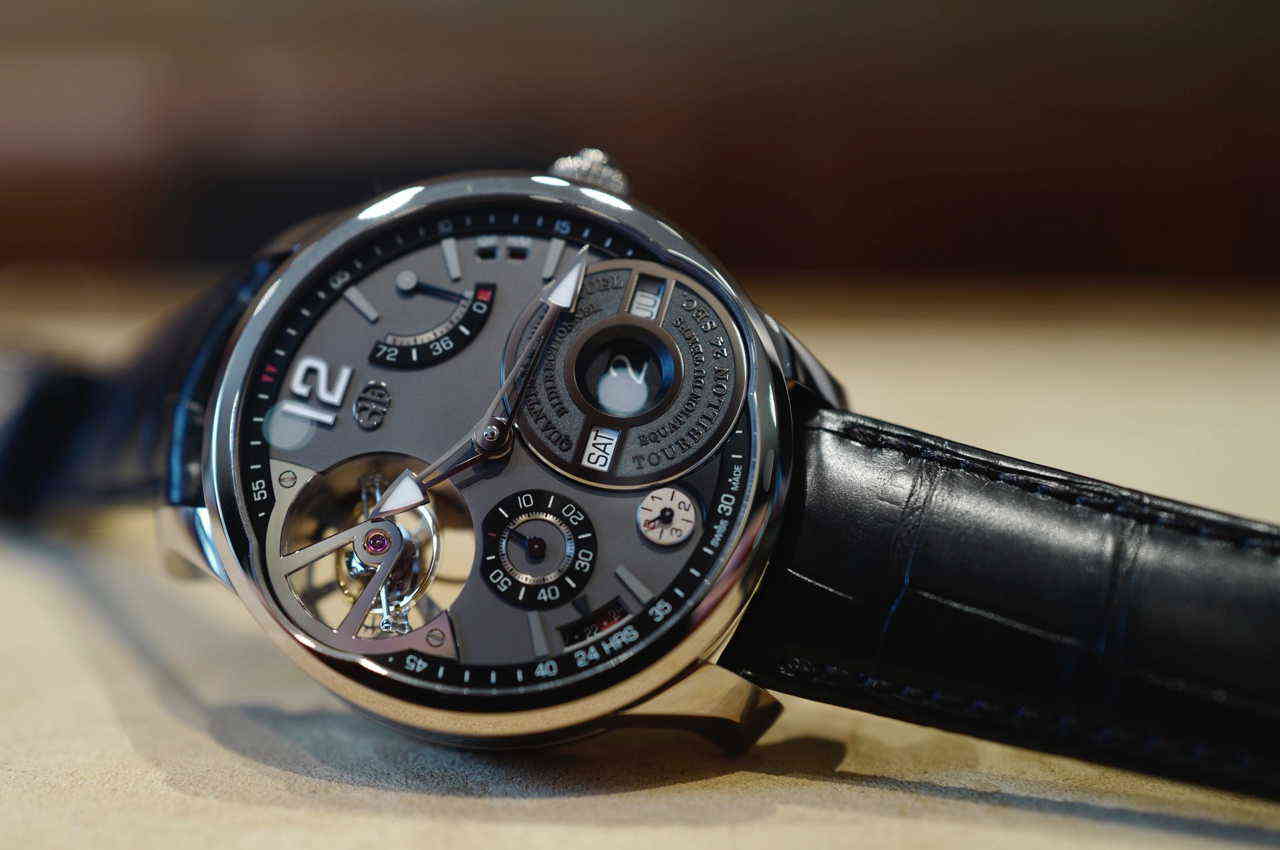 In the world of the obsessive watch collector, the mention of Greubel Forsey stops conversations. The reason? This small Swiss manufacturer have established a deserved reputation as being as innovative and inventive as they are obsessive perfectionists; so much so that they and their astonishing watches are considered by some to be the very pinnacle of watchmaking and this is a view reflected from within as they are regular visitors to the winner’s podiums in the watch industry’s premier award ceremonies

Greubel Forsey do not follow anyone: their approach, which seeks out new and refined solutions has repeatedly rocked the horological establishment with their single-minded pursuit of redefining watchmaking standards. Greubel Forsey quite literally break new ground constantly, and that invention is matched only by the peerless finishing found throughout every aspect of their watches.

With an annual production of around 100 pieces, a Greubel Forsey is a rare item, and we are very pleased to offer their magnificent Quantième Perpétuel à Équation: a piece so technically profound it actually requires both sides of the watch to accommodate its array of functions.

Central to the operation of the Quantième Perpétuel à Équation is its Computeur Mécanique, or Invention No.7. Through a series of interacting stacked gear wheels, which act as a mechanical calculating engine, the perpetual calendar is uniquely configured, and also provides the Greubel Forsey solution to the grand old problem of measuring the variances of solar time throughout the year, and from solstice to solstice, also known as the equation of time.

Considering the bewildering complexity of the movement, comprising no fewer than 570 components, the gleaming polished 43.5mm white gold case is beautifully sized, and in fact remarkably modest.

Inside the sapphire crystal the dial is a feast for the eyes and the imagination. Immaculately finished in hues of anthracite grey it is bristling with detail. Immediately the eye is drawn towards the constant action of the 24 second tourbillon, inclined to 25°, at the 10 o’clock position. Opposing, the setting for the three perpetual calendar windows is prominent too on its elevated round platform which also bears the technical legend, and on a smaller white gold plate in its shadow, the bissextile, or leap year cycle is displayed, just by the 6.

The hours and minutes are bold and clear and are tipped with Super LumiNova for low light conditions. Small seconds are positioned by the 8 and just below an elongated window displays the time in 24 hours. The power reserve is at the 2, next to two small windows marked QP and H/M, and these indicate which functions the crown will operate for setting.

The underside of the case reveals the mottled surface of the lower plate and another perspective of the tourbillon. The year is also shown numerically, but it is the curious, colourful display of the equation of time which is of particular interest. Devised to display the variation in lapsed or gained minutes in solar time as the seasons pass and the summer and winter solstices come and go, the equation of time is illustrated using two sapphire discs, the smoked uppermost piece cut precisely to move up and down the scale of difference.

One other feature, and perhaps one of its most important is related to the two little windows between the 2 and 3, mentioned above. For all its complexity, it would be expected that there would be several recessed adjuster buttons in the side of the case, but thanks to the design of its Computeur Mécanique, all functions are controlled through the single crown, and can even be wound backwards. Anyone who has owned a perpetual calendar will appreciate the sheer simplicity of this beautifully thought out solution.

The overall presence of this timepiece is dominating. It is instantly outstanding, aesthetically breathtaking and technically unparalleled. Greubel Forsey put so much ability and man hours into their watches that they are rightly one of the most celebrated names in ultra high end watchmaking.