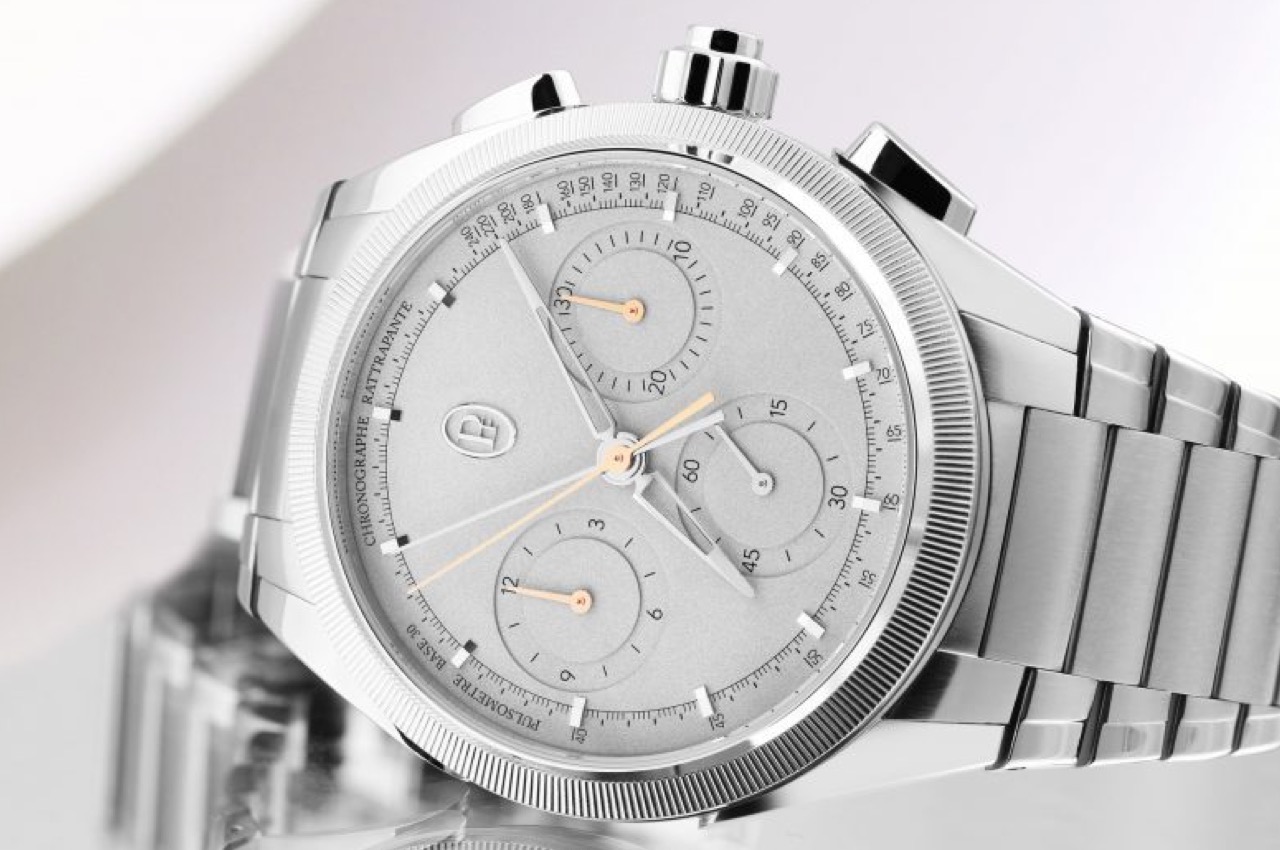 An extraordinary yet discreet piece of contemporary haute horlogerie by one of independent watchmaking’s most respected and pioneering maisons, the Tonda PF Split Seconds Chronograph from Parmigiani Fleurier is a masterpiece of technical complexity and ultimate understated luxury, concealing a solid gold 18ct manual winding movement in a case and bracelet of 950/1000 platinum.

To celebrate a quarter of a century as a stand-alone manufacturer, Parmigiani Fleurier has produced an exclusive twenty five piece limited edition of the Tonda PF Split Seconds Chronograph. Manufactured in platinum, this exceptional piece combines the company’s traditional watchmaking values with an all new appearance, which integrates case and bracelet as one elegant fluid design.

Originally established in 1996, in the small Swiss town of Fleurier by master watchmaker Michel Parmigiani, in the intervening years his eponymous company has built a prestigious reputation among connoisseur collectors on its timeless designs and exquisite craftsmanship, and for timepieces which are a reflection of individuality and refined tastes.

Epitomising these traits the Tonda PF Split Seconds Chronograph is an exceptional wristwatch in every way. Almost entirely uniform in colour, with contrasting polished and satin finished surfaces on its platinum case and bracelet, and a matte platinum dial, it is an outstanding piece of rare distinction.

Boasting one of the grand complications of haute horlogerie, the Split Seconds rattrapante chronograph is also one of the most technically complex mechanisms to manufacture, with its capacity to record two timed events simultaneously, yet independent of each other.

Measuring 42mm across and 15mm in height, the round case is clasped by curvaceous lugs, into which the teardrop shaped chronograph start/stop/reset pushers are integrated, and which taper as their lines flow into the bracelet. The bezel is fluted with coin-edge detail, while the crown also incorporates the split seconds pusher in its centre.

Beneath the sapphire crystal, the dial is manufactured in pure 950/1000 platinum, whose distinctive silvery colour is muted and textured with a very fine sandblasted matte finish. Applied rhodiumised hour indices complement the delta shaped hour and minute hands, while the chronograph indicators are distinguished by the gold plating. A pulsometer scale encircles the time display, which features thirty-minute and twelve-hour chrono counters at the three and nine o’clock positions respectively, with the small, constant seconds at the six.

On the underside, a sapphire crystal caseback reveals the breathtaking beauty and technical intricacy of the magnificent PF613 manual winding movement which beats within. Manufactured in 18ct rose gold, the movement is entirely produced in-house as a dedicated split seconds chronograph, with the tell-tale two column wheels. The gold bridges are skeletonised, and decorated with a coarse grained finish and immaculate mirror polished anglage, which is applied around the edges, and even to the most inaccessible internal angles.

Comprising some 360 components, the movement beats at a rapid 5Hz/36,000 vib/h which translates to a super smooth second hand sweep, and a chronograph accuracy of one tenth of a second, while deriving sixty-five hours of power reserve from its single barrel.

A piece which is as exceptional as it is exclusive, with only twenty-five expamples being produced, the Tonda PF Split Seconds Chronograph is a masterpiece of hand crafted haute horlogerie and reserved discretion, to celebrate a milestone anniversary for this pioneering independent watch manufacturer.