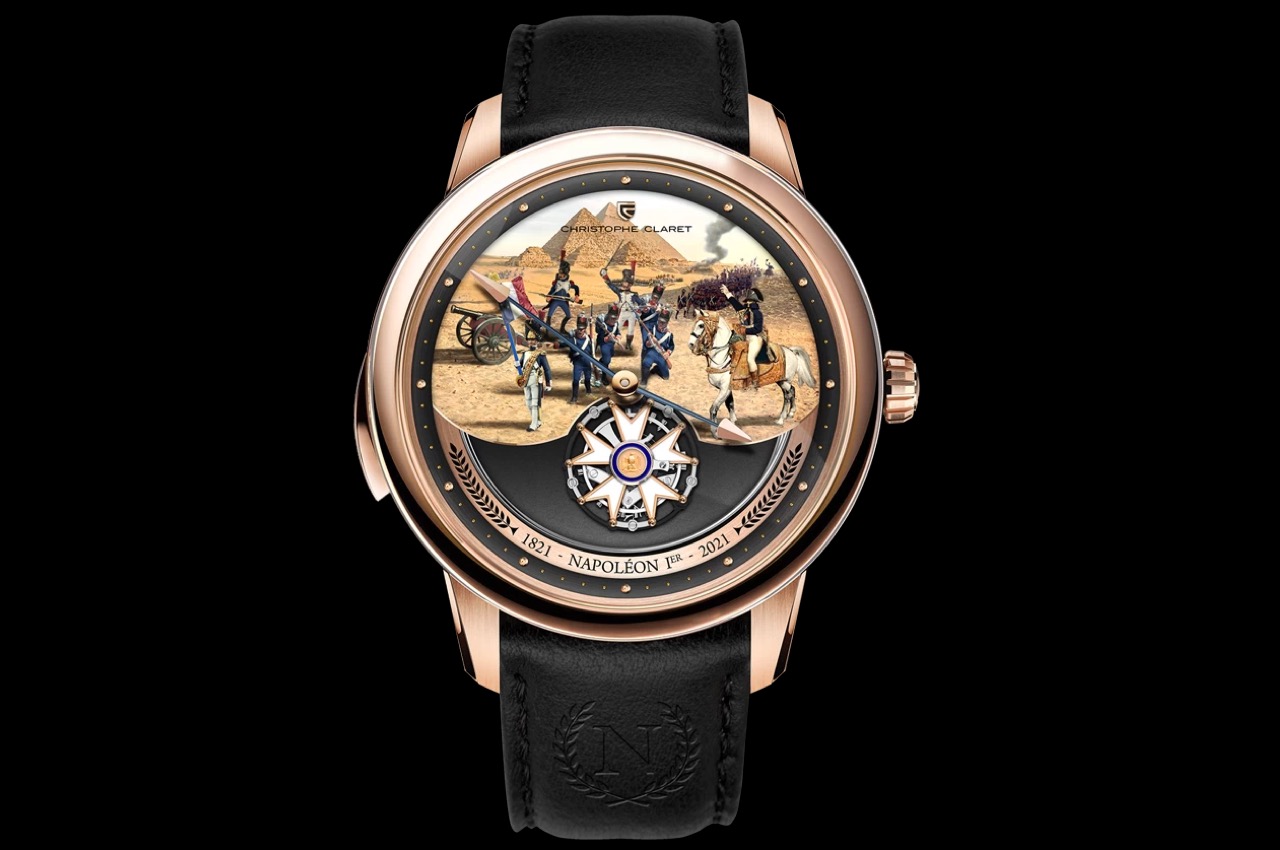 A masterpiece in every sense of the word, the Napoleon Minute Repeater Automate by Christophe Claret is a truly outstanding piece of haute horlogerie, which combines a suite of classical watchmaking’s most challenging grand complications with the artistry of a hand painted miniature battle scene, and a captivating mechanical animation of four jaquemart automata.

Manufactured to commemorate the two hundredth anniversary of the death of Napoleon Bonepart, the watch is a spectacular celebration of the legendary military campaigner’s legacy. Across two limited editions of eight unique pieces, manufactured in either 5N 18ct red gold or Grade 5 titanium, it is a piece which exemplifies the profound talent of one of the pioneers of contemporary independent watchmaking.

This remarkable watch is powered by the equally remarkable Christophe Claret NCB98 manual winding movement, an exquisitely crafted mechanism which has been entirely manufactured and finished in the company’s Le Locle ateliers to impeccable haut de gamme standards. Boasting minute repeater with Westminster Cathedral chimes, a glorious flying tourbillon with Legion d’Honneur motif as well as the Jaquemart automata, it is a creation of mechanical art, which is breathtaking in its complexity and sophistication.

At 47mm across and 15mm in height, the Napoleon Minute Repeater is certainly a piece which has a commanding presence, but the generous size complements the acoustics within, and accentuates the chiming of the four precision tuned gongs which encircle the interior of the case.

Beneath the gently domed sapphire crystal, the dial is divided into upper and lower sections, with the former featuring a miniature hand painted scene, depicting one of Napoleon’s battles, while the latter is dominated by a magnificent flying tourbillon, which rotates in a sixty second cycle and is decorated by a Legion d’Honneur medal, an award established by Napoleon himself, and still France’s highest military and civic honour today.

Activated by the slider on the case side, the repeater’s tone is clear and musical. While the hours and minutes are marked by the hammer strike on a single gong, the quarter hour is accompanied by the Westminster Cathedral chime of all four gongs. At the same time, the four jacquemart figurines on the dial perform in perfect synchronicity with the minute repeater’s chimes, bringing the miniature scene to life.

A sapphire exhibition caseback reveals the intricate beauty and complexity of the movement within. Comprising some 511 individual components, it is a magnificent feat of micro engineering. Beating at a frequency of 3Hz (21’600 vib/hr), it’s fully wound single barrel provides circa sixty hours of power reserve.

An exceptional piece for the most conscientious connoisseur collector of the highest levels of contemporary independent watchmaking, the Napoleon Minute Repeater Flying Tourbillon Jaquemart by Christophe Claret is presented on a strap of vegetable leather with folding clasp.