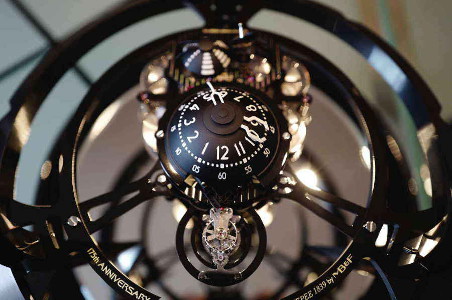 At The Limited Edition the unusual is our stock and trade, but even here the delivery of the MB&F Starfleet Machine brought activities to a temporary halt while we pored over the countless details and the sheer spectacle of this alien timepiece.

A creation lifted straight out of a slickly produced science fiction movie, the Starfleet Machine is part desk clock, part space craft and yet in its engine room beats an old-fashioned mechanical heart from co-collaborators L’Epée 1839, Switzerland’s oldest surviving specialist clockmaker, and for whose 175th anniversary this incredible living sculpture celebrates.

It is no exaggeration to say that this is a timekeeper like no other, but then anyone familiar with the MB&F brand will know to expect the unexpected, because if there’s one continuous theme which makes MB&F so beloved by so many, is CEO Max Büsser’s untarnished connection with childhood’s vivid imagination, as well as an uncompromising approach to innovative haute Horlogerie, and his obsession with perfection in the finished piece.

Protected from unexpected meteor squalls by three arced supporting beams and an outer blade-like C-shaped ring which surrounds it, the L’Epée movement lies in the centre of a one piece  framework. Exclusive to the Starfleet Machine the clockmakers had to overcome a number of technical challenges as the components, which are typically arranged to operate in the vertical position, had to be configured horizontally so as to integrate with the MB&F design.

Time is displayed on the larger of two black domes on the top, with the hours and minutes hands which arc to hug the bulbous dial. This is almost conventional, but the seconds - or the two red-tipped laser cannons which patrol their domain, sweeping inwards in a 20-second cycle before springing back to start again – are pure fantasy.

The smaller dome displays the power reserve by way of luminous painted graduated bars, which, just like the satellite dish beside it, passes through 270° as the eight-day reserve depletes.

With its innards fully exposed, the regulating organ of the balance and escapement are a constantly moving and captivating feature. The skeletonised bridge on the underside reveals the ingenuity of the L’Epée clockmakers, as the five barrels are arranged in series. A winding tool can be used for adjusting the time or recharging the barrels with a double-ended application for each job.

In little more than its first decade, MB&F has become firmly established as a strong favourite among lovers and collectors of quirky yet totally wonderful watchmaking of the most exacting standards, and at The Limited Edition we are pleased to offer this exceptional timepiece, brand new in manufacture packaging with full two year warranty.