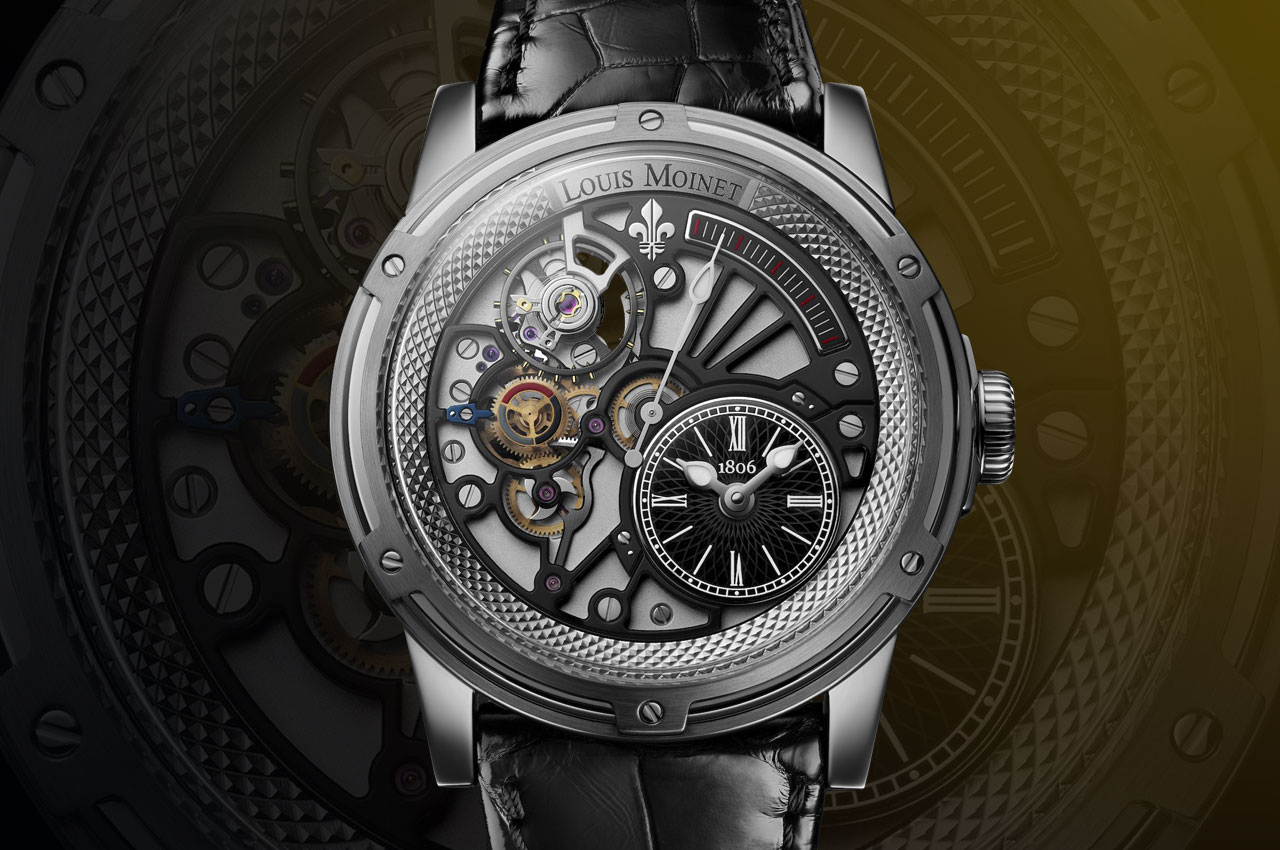 From the company whose founder and namesake can rightfully be considered as being the grandfather of the chronograph, as creator of the first example of this, the most popular of all horological complications, as far back as 1816, the Tempograph Chrome White Gold Black by Louis Moinet is a quite magnificent and sophisticated time piece, which is presented in an elaborate and imposing case with meticulously hand crafted detail throughout, and which distils two centuries of watchmaking into one exquisite contemporary wristwatch.

With its dual seconds displays and the striking contrast of glossy black over a frosted silvery base, the Louis Moinet Tempograph Chrome White Gold Black is a wristwatch which exemplifies the exceptional standards of haute horlogerie, and a piece which highlights the importance of our smallest whole unit of time measurement, the simple but never reoccurring second. Visually captivating and endlessly fascinating in its detail, it features a stunning, multi-part skeletonised dial, revealing a rhodium plated movement plate and exposing the beating heart of its in house movement within.

A manufacturer for the discerning and uncompromising connoisseur, every Louis Moinet watch is a very special piece which has been crafted by the skilled hands of the Swiss independent company’s master watchmakers, and in its signature case with six screws on its bezel, the Tempograph Chrome is eye-catchingly distinctive in its appearance.

Encased in 18kt white gold, the impressive case of the Tempograph Chrome measures 44mm across and 14.75mm tall, and it has an conspicuous presence on the wrist. With no fewer than fifty-nine components in its construction, the elaborate case features the Louis Moinet signature two-part bezel with six screws, a crown plate on the side, as well as articulated lug unions.

Beneath a sapphire crystal the three dimensional dial is spectacular, with the broad inner rehaut around the dial prominently decorated with Clous de Paris guilloché, which has a bold hobnail effect. Screwed onto a rhodium plated dial plate, the diamond polished skeletonised black decorative filets are pared back and sculpted around a cutaway which reveals the balance and gears below. The hours and minutes are indicated by lovely dewdrop hands on a domed dial with a black lacquer, which is offset at the five o’clock position.

The Tempograph Chrome features not one, but two separate second indications which break the minute down into three twenty-second segments. At the nine o’clock position a constantly rotating small seconds wheel is segmented into red, black and grey and it goes around once a minute. But the most eye catching feature of this magnificent piece is the central steel hand of the retrograde seconds, which sweeps across the marked arc at the two, before flicking back every twenty seconds and starting over again, repeating this cycle three times every minute.

The Louis Moinet Tempograph Chrome White Gold Black is a truly spectacular piece which celebrates the beauty and elegance of the humble second in a thoroughly engaging novelty. As with every watch which bears this famous name it is manufactured entirely in house using traditional hand operated machinery to achieve an astonishing degree of craftsmanship throughout, with only sixty examples being produced. It is presented on an alligator leather strap with folding clasp.