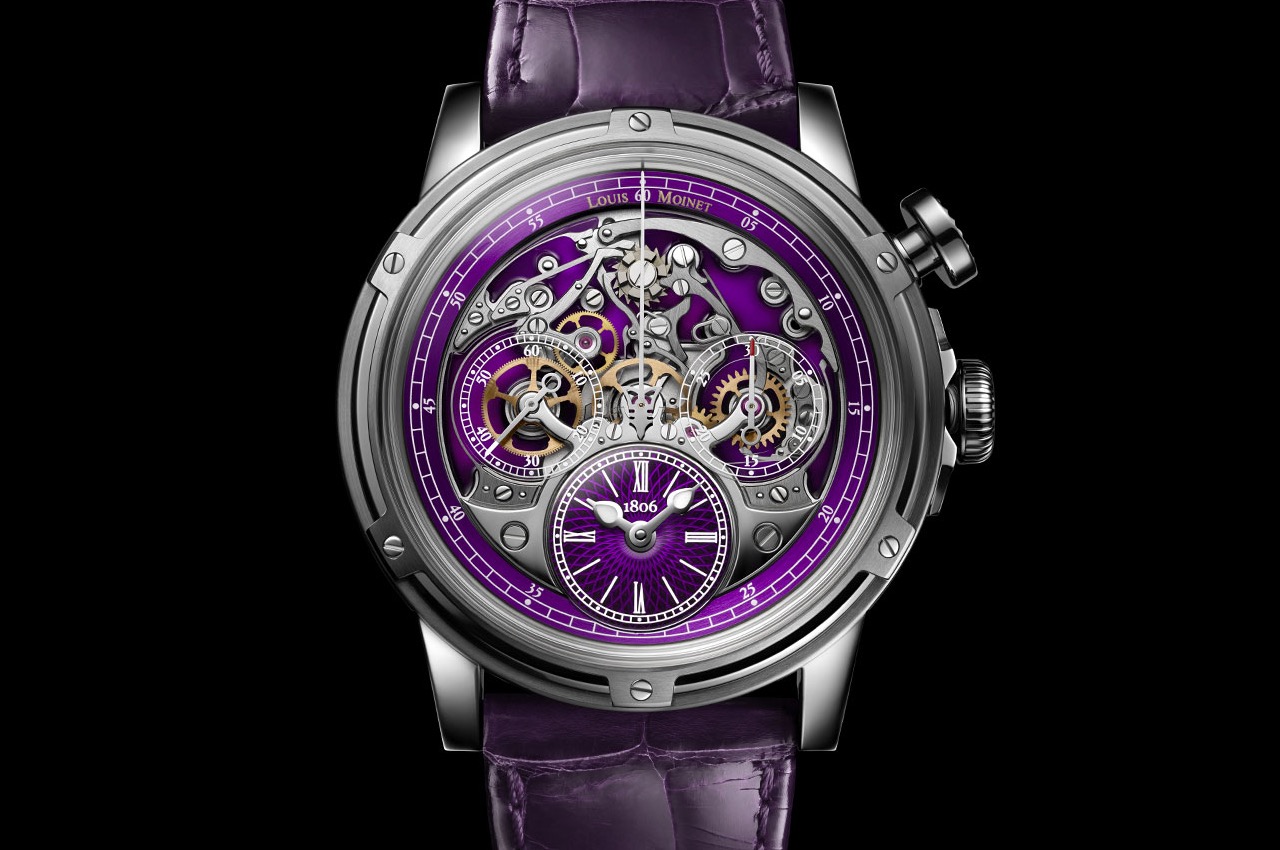 A spectacular wristwatch with a commanding presence in any setting, the Memoris Superlight chronograph by independent Swiss manufacture Louis Moinet is a superb reworking of a classical horologic complication, which the brand can legitimately call its own. Encased in a 46mm case of Grade 5 titanium with a silky smooth satin finish and presented with an eye catching cutaway dial with a stunning metallic purple mainplate, it is lightweight and hard wearing, as well as being an absolutely captivating rendition of a technical innovation first seen in 1815, and created by the company’s namesake and original founder Louis Moinet.

Designed and conceived in a collaboration with movement specialists Concepto, and manufactured in the company’s ateliers near the shore of Lake Neuchâtel, the Memoris Superlight is a contemporary testament to two centuries of watchmaking history. With its remarkable ‘split movement’ the sophistication of the chronograph mechanism’s architecture is fully exposed in isolation on the dial side, while the automatic mechanism, as well as the regulating assembly of balance and escapement are visible on the underside, behind an 18 karat gold oscillating weight decorated with deeply engraved guillochage.

Beneath a gently domed sapphire crystal, the cutaway display is beautiful in its deep purple colour, and the time is displayed on a small round dial of purple grand feu enamel at the six o’clock position, where the brand’s signature dewdrop hands indicate the hours and minutes. A pair of clear sapphire rings for the constant running seconds and the thirty minute chronograph counter at the nine and three respectively allow for an unrestricted and mesmerising vista of the mechanism below.

Accentuated against the purple backdrop of the movement plate, the focus is drawn towards the components of the chronograph which are assembled and fully exposed on its surface. Operated via the single mono pusher which is adjacent to the crown, the distinctive column wheel with its crown of teeth, which defines the contemporary chronograph is directly below the twelve, and is the command centre to the levers which activate the complication. With the gears and wheels of the going train also visible, it is a captivating view of this fascinating mechanical array.

On the underside, a sapphire caseback reveals the superb hand finishing of the the 18Kt gold oscillating weight and Côtes de Genève decoration on the plates and bridges of the self winding movement within. Fully manufactured in house by Louis Moinet the Calibre LM54 beats at 28’800vph, and will run for 48 hours before requiring rewinding.

A superb contemporary wristwatch which celebrates one of the most familiar yet complex of all horological complications, the Louis Moinet Memoris Superlight is a chronograph of mesmerising sophistication, and takes the company’s own two hundred year old innovation into the twenty-first century. It has been manufactured in an exclusive production of only twenty-eight examples, and is presented on a purple alligator leather strap with folding titanium clasp.