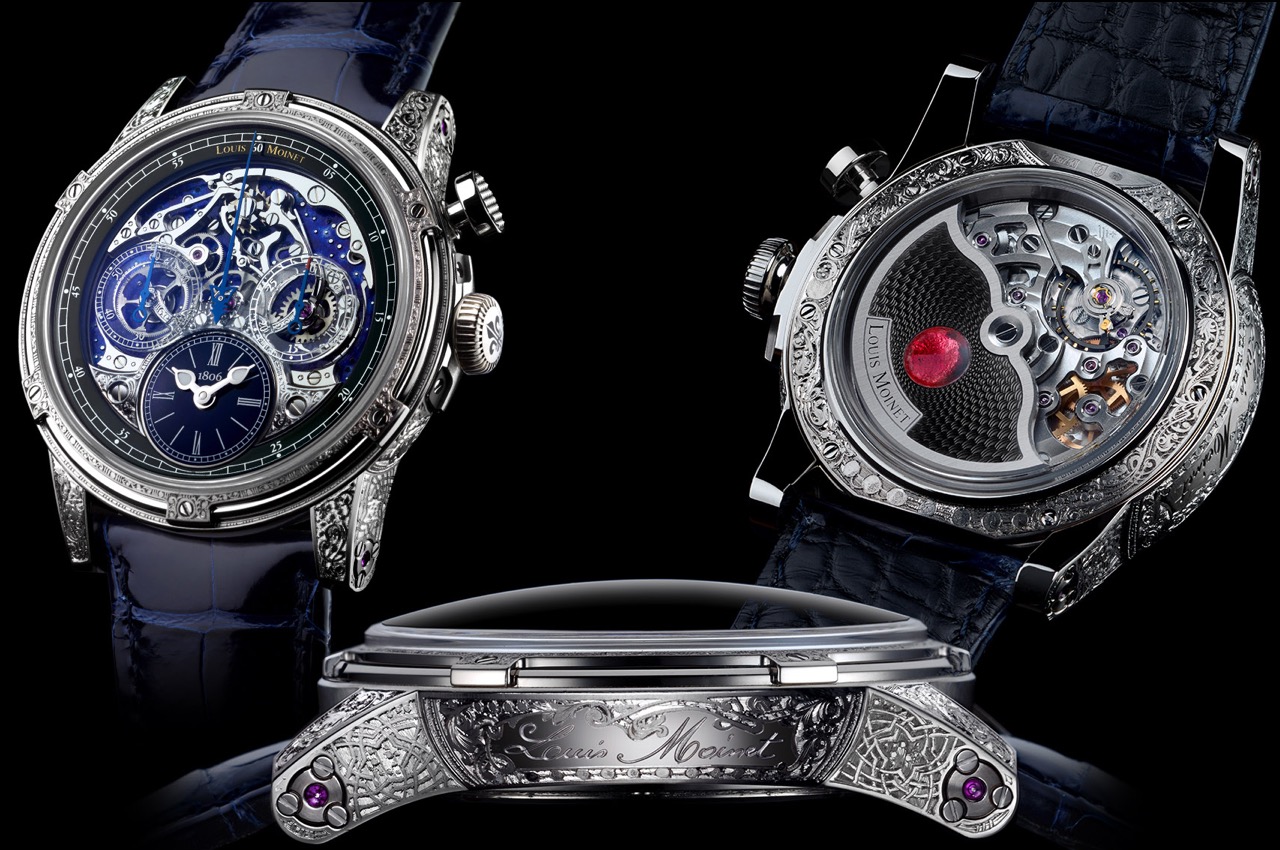 To celebrate the two hundredth anniversary of the chronograph, and its founder and namesake’s most celebrated achievement, Louis Moinet has created a magnificent commemorative limited edition chronograph. Inspired by the very first timepiece of its kind the Memoris Red Eclipse is a spectacular wristwatch in 18Kt white gold, meticulously hand engraved and featuring an open worked dial which exposes the mechanical intricacies of its inventor’s legacy to horology.

Two centuries on from its first appearance, apart from the fundamental functions of time and date, the chronograph has become the most commonly found horologic complication in use today, thanks to its ability to monitor and record with precision a specific period of elapsed time; a function which has a universal appeal. Long the subject of debate as to its origins, the matter was finally settled in recent years, with the discovery of Louis Moinet’s chronograph of 1815 predating any other example by a full five years.

Presented in a magnificent 46mm case of 18Kt rose gold, with meticulous hand engraving decorating its surfaces, and beautiful hand finishing of its components, the Memoris Red Eclipse is, in its every detail, a masterpiece which celebrates the chronograph in all of its magnificence. Entirely created and finished by the skilled hands of artisan craftspeople at the Louis Moinet atelier, it is a fitting tribute to a visionary inventor.

Beneath a convex sapphire crystal, the time is displayed on a small round dial of dark blue grand feu enamel, where the brand’s signature dewdrop hands indicate the hours and minutes. A pair of clear sapphire rings for the constant running seconds and the thirty-minute chronograph counter allow for an unrestricted and mesmerising vista of the mechanism below.

Against a midnight blue background with hand painted stars, the spotlight falls onto the components of the chronograph which are assembled and fully exposed on its surface. Operated via a single mono-pusher adjacent to the crown, the distinctive column wheel with its crown of teeth, which defines the contemporary chronograph is directly below the twelve, and is the command center to the levers which activate the complication. With the gears and wheels of the going train also visible, it is a captivating view of a stunning mechanical array.

On the underside, a sapphire caseback reveals the superb hand finishing of the 18Kt gold oscillating weight and Côtes de Genève decoration on the plates and bridges of the self winding movement within. Fully manufactured in house by Louis Moinet the Calibre LM54 beats at 28’800vph, and will run for 48 hours before requiring rewinding.

A watch of exquisite execution, the Louis Moinet Memoris Red Eclipse is a piece of historic significance and has been manufactured in exclusive production of only twelve examples. This horologic masterpiece is presented on an alligator leather strap with 18Kt white gold folding clasp.