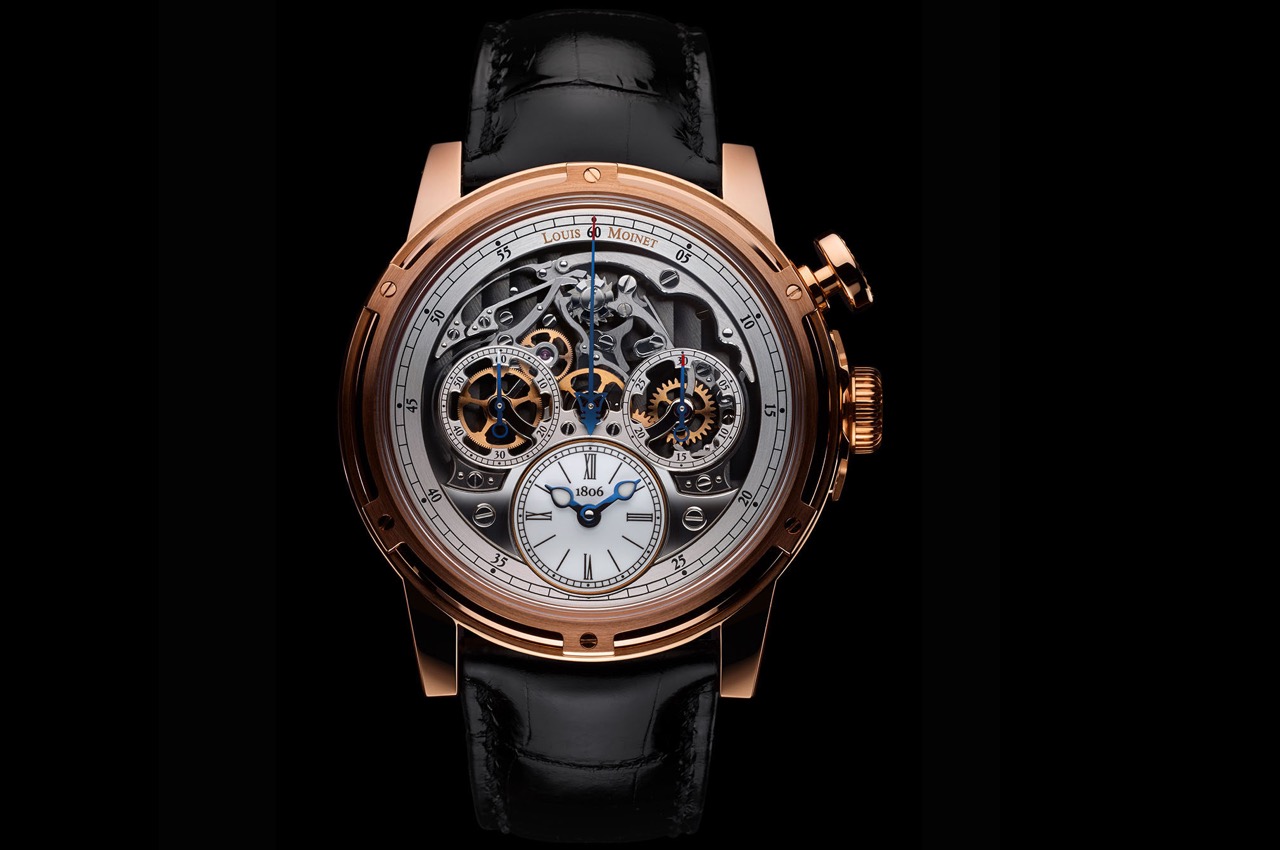 In 1815, French watchmaker, astronomer, and inventor Louis Moinet created the world’s first chronograph; a sophisticated horologic complication which could measure precisely a specific period of time, commencing and ending with the press of a button. Ahead of its time, his invention would go on to have far-reaching applications, and apart from the fundamental functions of time itself, has become the most popular of all novelties to be found on a wristwatch.

Today, on the shores of Lake Neuchâtel, the Louis Moinet ateliers create watches of rare beauty and elegance, handcrafted and finished to connoisseur standards of horology. To mark the occasion of its two hundredth anniversary, and inspired by this original landmark timekeeper, Louis Moinet has created the breathtakingly beautiful Memoris chronograph in a very limited production of hand manufactured commemorative wristwatches.

The Louis Moinet Memoris, like its inspiration, is a mono-pusher chronograph, with a single push button adjacent to the crown for activating, stopping and resetting the elapsed time function. While that is quite unusual, as most chronograph watches have two buttons, it is the actual technical complexity of the chronograph complication which is really in the spotlight, as its components are exposed on top of the blued movement plate and dominate the upper portion of this exceptional masterpiece, with the distinctive column wheel with its crown of teeth, which defines the contemporary chronograph directly in line below the twelve.

The Memoris is encased in an impressive 46mm case of 18Kt rose gold, with polished and satin finished surfaces, and bezel screwed down in six positions. Beneath the gentle convex profile of the sapphire crystal, the dial is configured with an outer chapter ring for the chronograph seconds, while the time displayed on a glossy white grand feu enamel dial at the six, where the brand’s signature dewdrop hands indicate the hours and minutes. Just above, two stripped-back subdials, for the constant seconds at nine, and thirty-minute chronograph counter at the three, reveal the wheels and gearing beneath, as well as the stunning backdrop of the blue main plate, decorated with Côtes de Genève stripes.

On the underside, a sapphire case back reveals the superb guilloché Clous de Paris finishing of the 18Kt gold oscillating weight and Côtes de Genève decoration on the plates of the self-winding movement within. Fully manufactured in house by Louis Moinet the Calibre LM54 beats at 28’800vph and will run for 48 hours before requiring rewinding.

A watch of exquisite execution, the Louis Moinet Memoris is a piece of historic significance, which celebrates the chronograph in spectacular fashion.

This horologic masterpiece has been manufactured in an exclusive production of only sixty examples, and is presented on an alligator leather strap with 18Kt rose gold folding clasp.