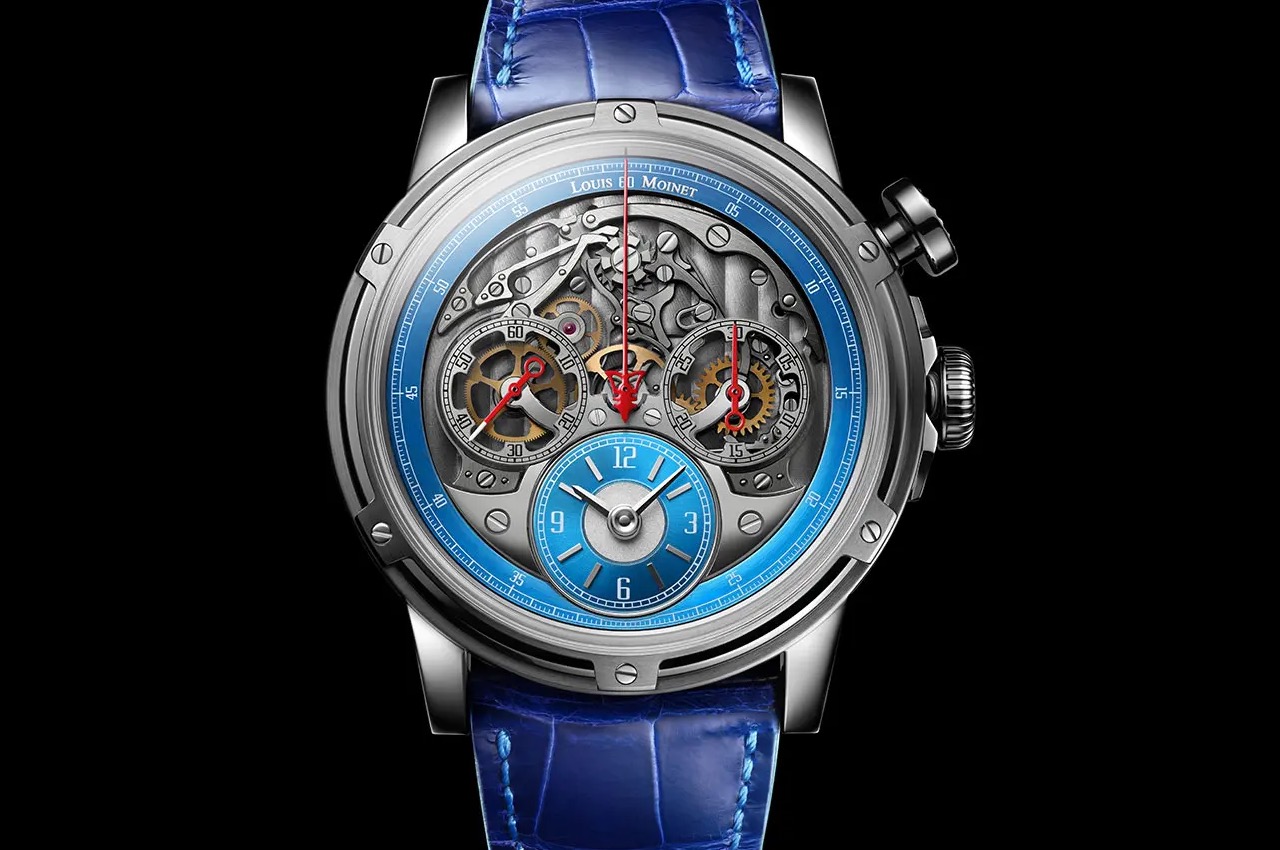 A stunning example of contemporary independent watchmaking, the Memoris Alaska by Louis Moinet demonstrates this independent Swiss manufacture’s mastery of technically challenging Haute Horlogerie. Forming part of the company’s  2021 Life collection, the Alaska model  combines vivid, chromatic colour with a stunning display of mechanical complexity. With its brilliant blue dial and encased in a 46mm case of lightweight Grade 5 titanium, it is a watch with irresistibly eye catching aesthetics, and one which has an imposing presence on the wrist.

Offering a new perspective on this remarkable chronograph watch, the Memoris Life collection comprises of five models, each issued in an exclusive limited series of twelve individually numbered pieces, and each displaying its own unique personality.  Already notable for its sophisticated proprietary movement, which is designed to expose the intricate complexity of the chronograph mechanism on the dial side, with the Life collection Louis Moinet introduces a dramatic twist, with a daring theme of vibrant colours which add a new dimension to this modern classic.

Although pared back to no more than a chapter ring and small decentralised dial on which the hours and minutes are displayed, the striking blue dial of the Alaska edition is spectacular. The effect is created through a combination of sunbrushed satin finishing with a bright blue varnish, and a silvering process, which gives the dial an added metallic appearance. Two skeletonised subdials at the three and the nine display the thirty-minute chrono counter and small constant seconds respectively, and the red hands stand out effectively against the exposed mechanical backdrop beneath.

Accentuated against the black backdrop of the movement plate which is decorated with pronounced Côtes de Genève stripes, the focus is drawn towards the components of the chronograph which are fully exposed on the dial side. Operated via the single mono pusher which is adjacent to the crown, the distinctive column wheel with its crown of teeth, which defines the contemporary chronograph is directly below the twelve, and is the command centre to the levers which activate the complication. With the gears and wheels of the going train also visible, it is a captivating view of this fascinating mechanical array.

On the underside, a sapphire caseback reveals the superb hand finishing of the 18Kt gold oscillating weight and Côtes de Genève decoration on the plates and bridges of the self winding movement within. Fully manufactured in house by Louis Moinet the Calibre LM86 beats at 28’800vph, and will run for 48 hours before requiring rewinding.

A superb wristwatch which celebrates one of the most familiar yet complex of all horological complications, the Louis Moinet Memoris Vesuvio is a chronograph of captivating beauty. It has been manufactured in an exclusive production of only twelve examples, and is presented on a rubberised blue alligator leather strap with blue stitching and folding titanium clasp.