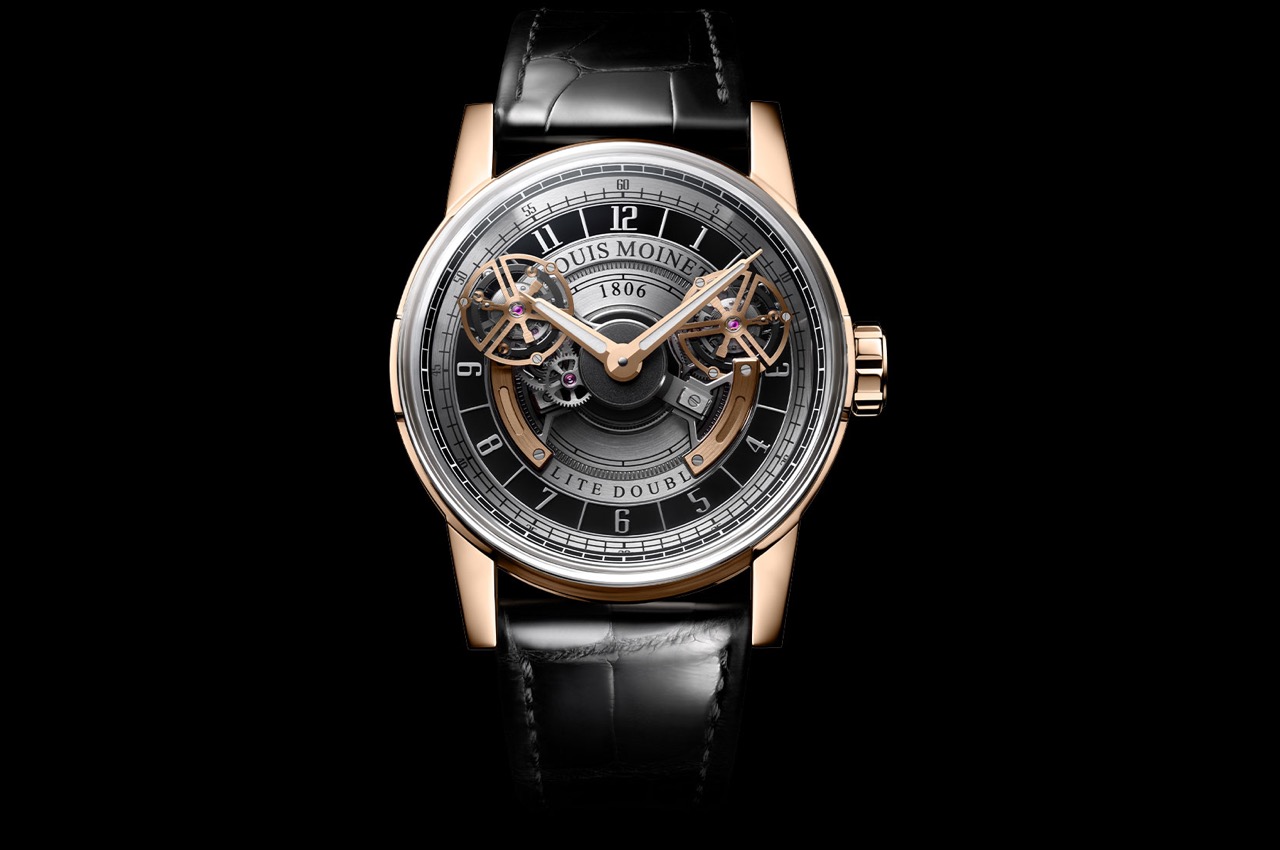 With its three dimensional display, in which two tourbillons revolve in opposite directions above the dial, locked in a never ending mechanical waltz performed inside a glass tank of sapphire crystal, the extraordinary Astronef by independent watch manufacture Louis Moinet is a watch of profound technical complexity, exquisite hand finishing, and utterly absorbing spectacle.

An elaborate case construction features an 18ct rose gold chassis with sculpted hollow windows, and into which a tall sided sapphire crystal is seated, providing an uninhibited view of the dial, and the fascinating mobile mechanism which dominates the display. Measuring 43.5mm across and almost 17mm in height, and with such arresting aesthetics of contemporary haute horlogerie architecture, Astronef has an imposing presence on the wrist, yet it wears lightly and comfortably on the wrist.

Circulating around a central column which towers over the base of the dial, two flying satellite tourbillons revolve in opposing directions on stacked jibs, so one passes above the other as they go around, each balanced with a gold counterweight.

The uppermost tourbillon completes a circuit once every five minutes at twice the speed of the lower which revolves once every ten minutes, and they meet and pass each other in their counter-directional cycles eighteen times every hour. While circumnavigating the display, each tourbillon is also rotating every sixty seconds, with a differential maintaining synchronicity.

The sensation of depth from above is further accentuated by the distance between the hour and minute hands and the dial, which is finished with rhodium plating with black DLC highlighting the numerals and markings. Separated by the revolving carousel in between, the hands have generous applications of powerful Super-LumiNova, so the watch has optimal legibility in all light conditions.

On the underside, the entirely in-house manufactured manual winding LM105 calibre is revealed through a crescent sapphire crystal window. Comprising no less than 471 individual components, and beating at a leisurely 21’600 vib/hr, the mechanism is a marvel of micro engineering. Mirror polished anglage defines the edges of the bridges while Côtes de Genève stripes adorn their surfaces, all finished by hand to the uncompromising standards of haute horlogerie.

Each delivering their store of energy independently to the two tourbillons, the mainsprings are exposed within the two openworked barrels, as they deliver an impressive 48 hours of autonomy to power the animated display above. As the crown does not pull out to adjust the time, nor to wind the movement, a lever set into a recess on the caseback switches between two positions to facilitate either winding mode or time adjustment via the crown.

A remarkable and highly individual timepiece from one of independent watchmaking’s most eclectic haute horlogerie maisons, the Louis Moinet Astronef is manufactured in a limited edition of only eight pieces, and is presented on a black alligator leather strap with folding clasp.