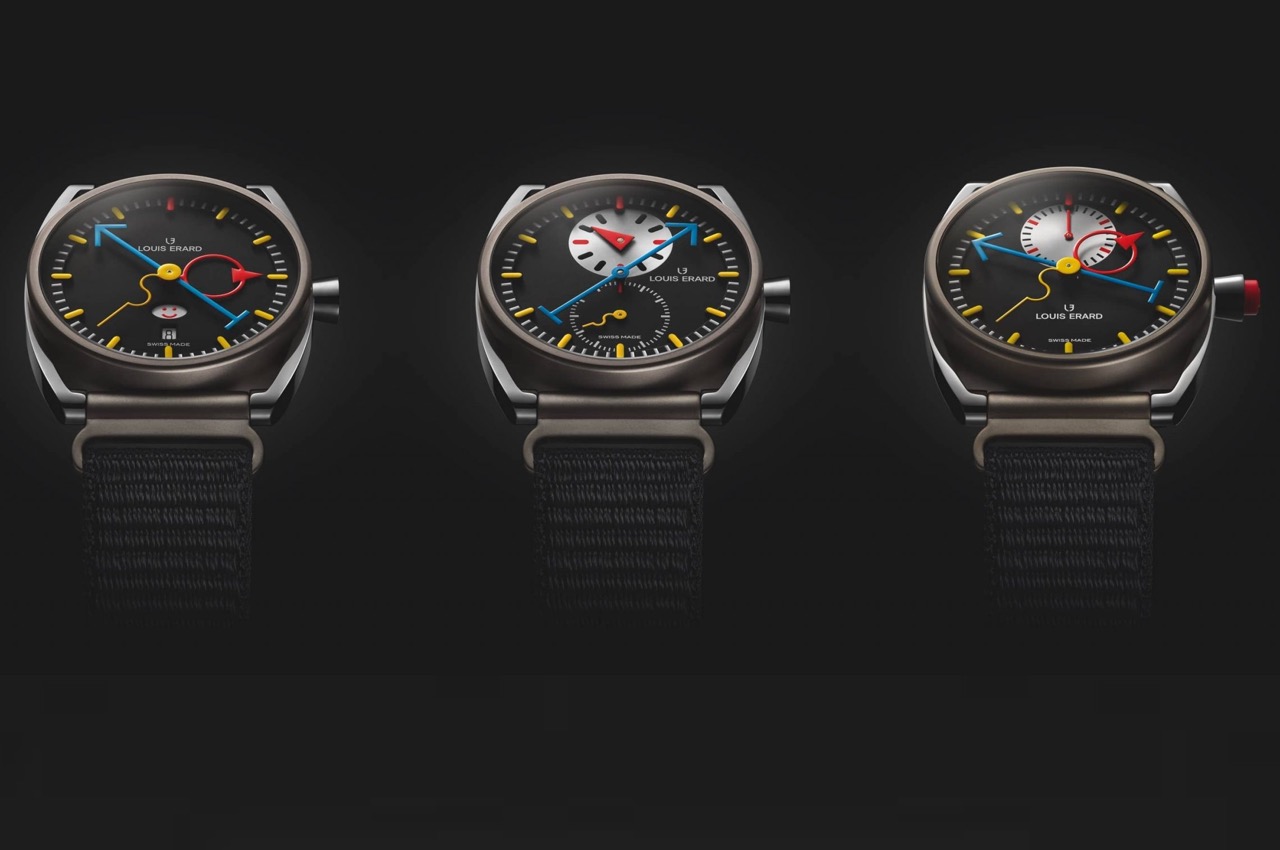 Bringing together the horological acumen of an acclaimed watch manufacture and   the creative genius of a renowned designer, the Louis Erard x Alain Silberstein Triptyque collection is a highly desirable wristwatch set which boasts originality, complexity and diversity. Individually, each watch is meritorious and boasts superb craftsmanship and styling. When presented together as a trine, the artisanship  of the collection immediately becomes apparent, and one can appreciate why this set has been entitled a “Triptyque” within which each model harmoniously adds to the collection’s artistic narrative.

Consisting of three timepieces, beautifully presented in a limited series box set of 78 pieces, the Louis Erard x Alain Silberstein Triptyque Collection timepieces each feature differing complications.  Characterised by similar styling cues to those which iconised  Alain Silberstein’s timepieces from the 1990s, each piece also enjoys the prestige of precision mechanical movements. The merging of M. Silberstein’s instantly recognisable use of primary colours and design nuances, together with the superb horological workmanship associated with the Louis Erard atelier ensure that this memorable collection is a highly desirable proposition.

The three watches carry cases crafted from titanium. Comprising of a rounded case form with vertical brancards which lend the profile an airy aspect, each housing has been meticulously decorated with a micro-blasted finish on the lugs, case and bezel, while the brancards are enhanced with a polished finish. A pert, conical-shaped crown, polished to perfection, is the final flourish on this unique structure which promises to wear larger than its 40mm diameter thanks to its openworked frame. Not designated to reside within the superb presentation box, each piece has been styled for daily wear, with water resistance of up to 100 metres, and double-layer nylon straps with hook-and-loop fastening for easy adjustment.

The simplest model of the three is the La Semaine model, a timepiece which is oozing with joyful charm.  In the same design language as the celebrated Alain Silberstein Smileday display, it replaces the day of the week with a “mood of the day” stylised face, housed within an oval-shaped aperture on the lower dial just above the date window. While the wearer moves through their week, the playful  expressiveness of the little display will no doubt raise the spirits - even on a Monday morning, and perhaps serve as a reminder that time is always evolving and is ever-flowing. And, as the display is entirely at the discretion of the owner, it can be adjusted to suit their own bespoke weekday emotions. The matte black dial of the watch ensures that the hands, indices and markers are standout features. The hour hand is a perfect circle in bright red, with a solid triangular marker; the blue minutes hand has a robust arrow-tip with a hammer counterweight while the serpentine-like seconds hand is rendered in yellow. All three reach out to minute markers in pristine white, and yellow indices at each hour, except for the red example at the 12 o’clock location. This superb piece is powered by a meticulously decorated automatic ETA 2836-2 calibre, viewable through the sapphire crystal caseback. Beating at 28’000vph, it is equipped with a Louis Erard openworked rotor enabling a power reserve of 38 hours.

An equally vibrant proposition, Le Chrono Monopoussoir offers a resolutely contemporary take on the traditional single pusher chronograph timer, and immediately the eye is drawn to the flamboyant red tip of the pusher set within its conical crown. On activation, the yellow serpentine hand indicates the chronograph seconds, while the white opaline dial at 12 o’clock serves as the 30-minute counter via a petite red hand and black and red markers.  Joining them is a red circular hour hand and an elongated blue arrow example for the minutes. This is a façade brimming with stimulating subtleties, made all the more dynamic against the black matte backdrop of the dial. The sapphire caseback reveals the decoration of the Sellita SW500MPCa automatic movement, an élaboré grade mechanical movement, featuring immaculate decoration and a Louis Erard openworked rotor, and which is equipped with a power reserve of 48 hours, beating at 28’800vph.

For many discerning collectors the stellar model of the set will be the exceptional Le Régulateur watch, a spirited example of the classic dial arrangement, which individualises the time-telling indications into differing sectors. With a combination of immaculate white, zesty yellow and brilliant red markers at the dial edge, the sturdy blue lacquered arrow-tipped minutes hand dominates. On the upper dial, on a silvery opaline sub-dial, the hours are indicated via a stubby red triangular hand against black and white markers. At six o’clock, a diminutive form of Alain Silberstein’s signature serpentine hand counts the running seconds against white markers, with a tiny brilliant red marker defining the 12. When combined, the effect of the varying colour tones, graphic shapes and proportions is stunning, and the design almost appears effortless in its perfection. The movement revealed through the sapphire crystal caseback is the élaboré grade mechanical Sellita SW266-1 calibre featuring a Louis Erard openworked rotor, equipping the movement with a power reserve of 38 hours and beating at 28’800vph.

Le Triptyque Louis Erard x Alain Silberstein collection will be a limited release of 78 presentations, with each timepiece individually numbered upon its caseback. In addition to the three watches, the collection includes a digital artwork signed by Alain Silberstein and a personal non-fungible token linked exclusively to each Triptych, with an unique opportunity for the owner to personalise their digital token with a private message.