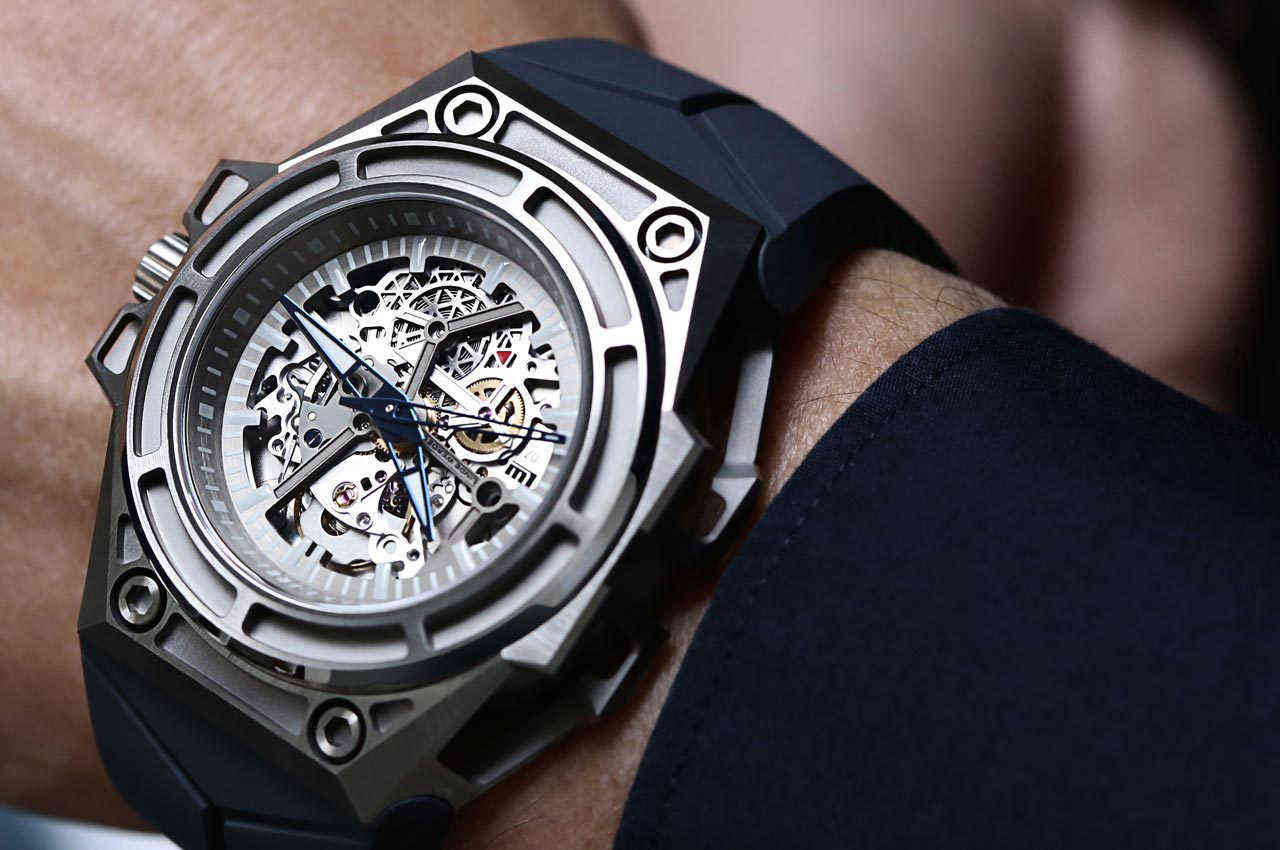 Ever since lifelong friends Morten Linde and Jorn Werdelin pooled their creative forces in 2002 to establish their own eponymous independent watch company, the Linde Werdelin star has risen spectacularly, their instantly identifiable high tech sports watches proving an immediate hit among those image aware individuals whose playtime is spent exploring the extremes of the great outdoors.

The critically acclaimed Linde Werdelin SpidoLite collection defies convention and is defined by its lightweight angular and vented form, its skeletonised dial, and the sheer presence of its uncompromising, futuristic and ergonomic design, which are all prominent features in the brand dna.

In the Linde Werdelin SpidoLite Titanium, the Grade 5 ingot from which the case is hewn is machined back to almost a frame-like profile, in pursuit of achieving the perfect crossover between strength and minimum weight. Its satin and microbillé finished surfaces and bezel are hollowed and honed out in true motorsport-influenced weight saving fashion and the hex socket screws perpetuate that theme.

Beneath the sapphire crystal and the steep rehaut, the SpidoLite’s dial has been almost entirely cut back to reveal the detailing on the microbillé finished innards of the LW07 automatic movement below. A little red arrow serves to indicate the power reserve, not by means of a scale, but instead pointing at the open barrel spring as it expands across the life of its 42 hour cycle.

A limited edition of only 75 pieces worldwide, the series number and the Spido logo are laser engraved onto the titanium underside bezel, and a sapphire crystal caseback offers a full view of the technically excellent Concepto LW 07 movement which has been further modified by the technicians at Linde Werdelin.

The Linde Werdelin SpidoLite Titanium is presented on a black natural rubber strap with titanium tang buckle and, as is common throughout their collections, is interchangeable with any LW strap, opening up myriad combinations.

Of course the other notable feature of all Linde Werdelin watches is how each model has been designed around its ability to attach either the Reef or Rock digital data instruments, which provide essential live information for the serious underwater or high altitude off piste enthusiasts – which the two owners of the company very definitely are. These watches are borne out of a real passion.

Simply put, the Linde Werdelin SpidoLite Titanium is one of the coolest and most distinctive sports watches made by any watch company today. A personal favourite, if you like. Despite its 44mm x 46mm x 15mm size, it is the lightest version in the SpidoLite collection and its lightweight and unique form wears comfortably and works equally well on a male or female wrist. Just a step away from the mainstream, it’s exclusivity increases its appeal for those who appreciate a great timepiece and are sold by the detail, the individuality and the build quality for which Linde Werdelin watches are synonymous.

At The Limited Edition, we do have a strong affinity with Linde Werdelin, and that’s all because of the really attractive bold and instantly recognizable design, the exacting standards of manufacture and overall fantastic quality, and another point of interest to bear in mind is because of the capped low production numbers each year, these watches do not appear very often at any significant mark-down, and so are likely to retain a stronger resale value than might be expected with other non-mainstream marques.