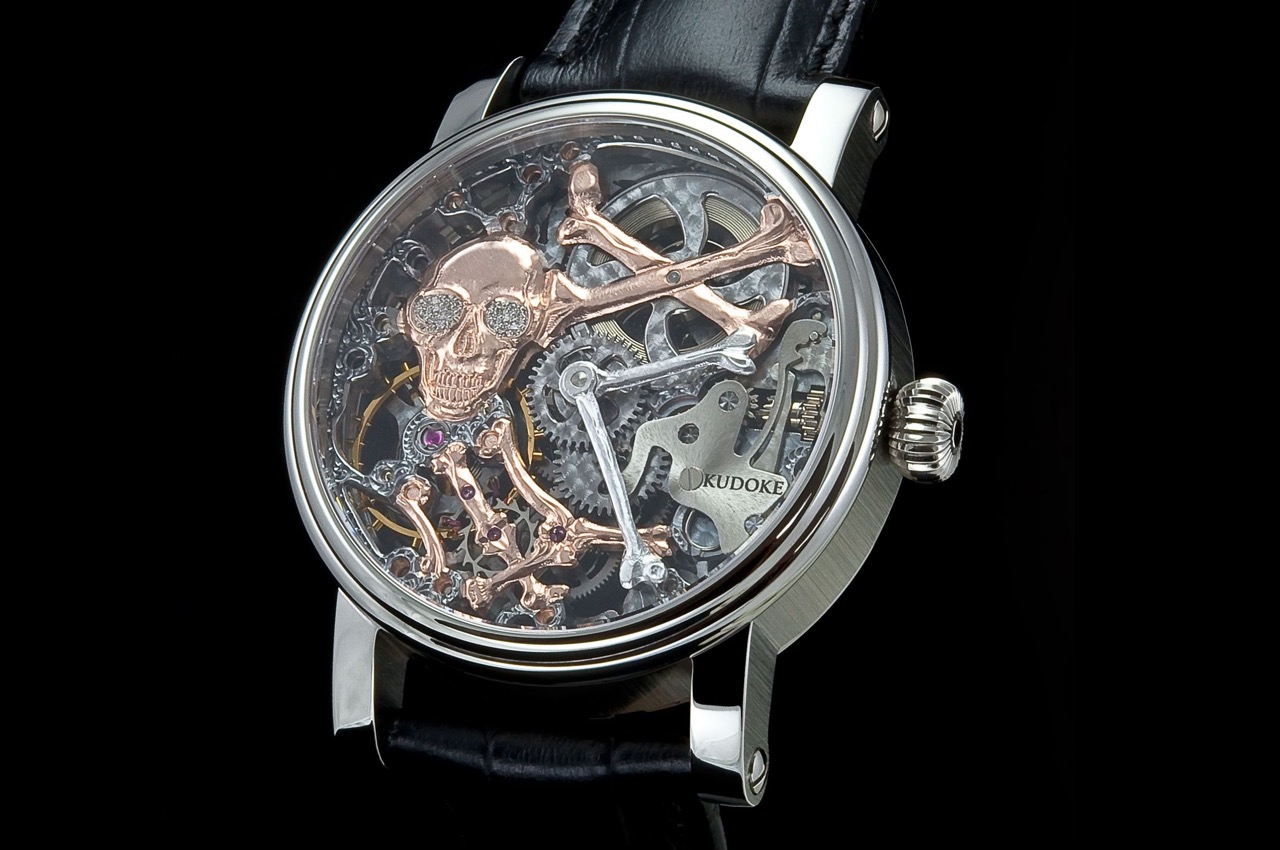 A fabulous hand crafted wristwatch for the collector who appreciates the artisanal craftsmanship of a true master, as well as something that’s a little different to the norm, the Real Skeleton by German independent watchmaker Stefan Kudoke is a piece from his Kunstwerk collection which showcases his exceptional talent as a master of the arts of skeletonisation and hand engraving; traditional skills which are among the most demanding and unforgiving for any watchmaker.

Over the past decade, this talented young watchmaker, who in 2019 was the recipient of the cherished GPHG Petite Aiguille award; one of the watchmaking industry’s highest accolades, has built a reputation for his extraordinary skeletonisations and elaborately hand engraved dials, which have delighted aficionados of this classical and demanding craft.

Dominated by a golden skull with diamonds set into the eye recesses, and surrounded with gold bones, behind which the intricacies of a hand winding movement are revealed, his Real Skeleton is a three dimensional masterpiece which captivates and fascinates in equal measure. A favourite subject of artisanal watchmakers for centuries, the skull is a reminder of our own mortality and the fragility of life, and crafted entirely by hand, his wonderful engraving makes each one of these pieces unique, and in every detail it is beautifully executed.

Encased in a round 42mm case of stainless steel with sapphire glass above and below, the Real Skeleton features a tall, flat sided waist with long and elegant lugs, a rounded stepped bezel and a fluted onion style crown. A combination of brushed and polished finishes creates contrast on the surfaces of the case.

Under the sapphire glass, the time is indicated with a pair of rhodiumised engraved bones for the hour and minute hands, and behind the engraved dial work, the movement’s components are also revealed, with the gears and barrel spring visible amid the openworked and skeletonised bridges and plates, allowing light to flood right through the case, and so making it see through.

The movement itself is a Swiss ETA/Unitas 6498 manual winding mechanism, which has been stripped down to its component form before being finished with perlage decoration. Through the sapphire caseback, the skeleton theme is as spectacular on the underside as on top, and all of the bridges which secure the moving pinions and gear wheels are made of engraved bones. Beating at 18’000vib/h it has a minimum of 46 hours of autonomy between winding.

With each piece being meticulously crafted by hand, no two examples of the Kudoke Real Skeleton can be identical, so each one is a truly unique and exclusive watch. It is presented on a black crocodile leather strap with steel pin buckle, with the option of a folding clasp available upon request.