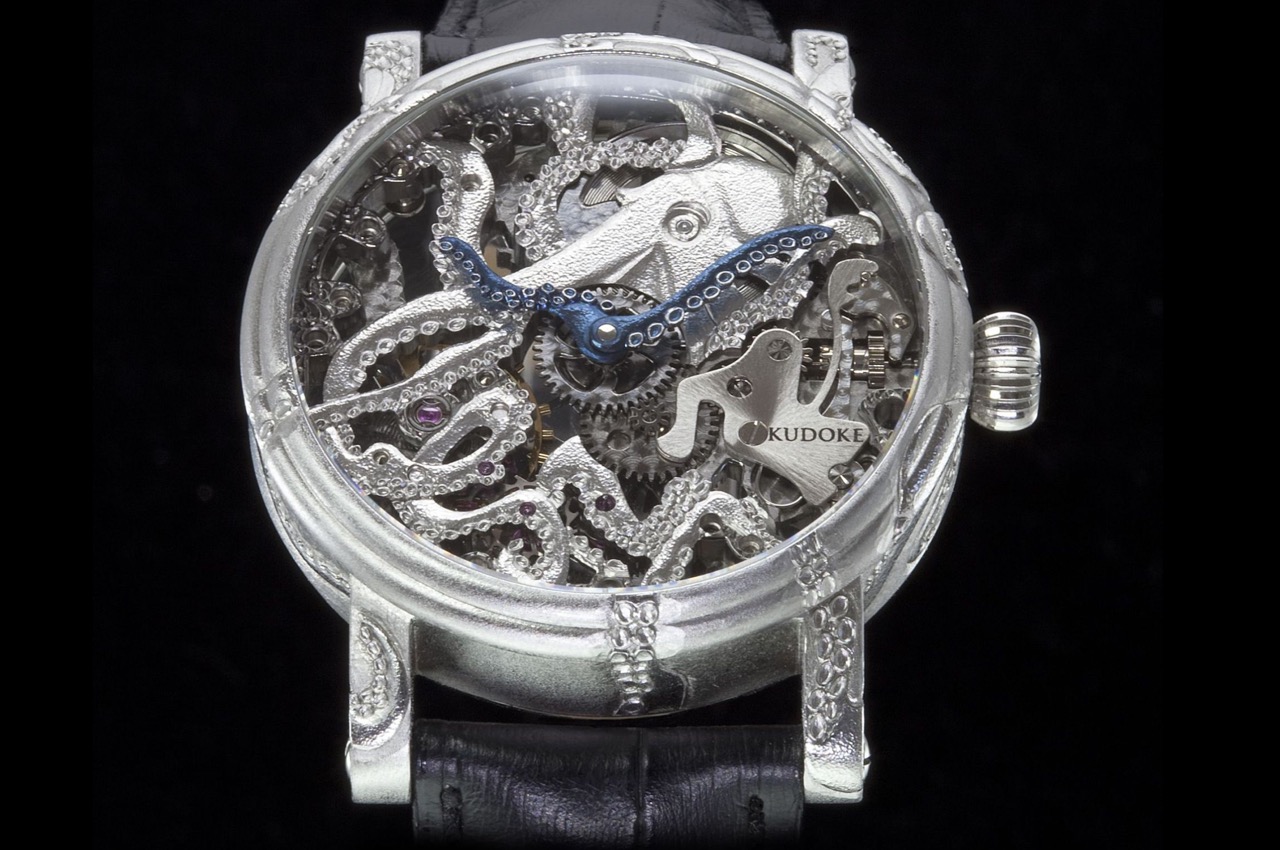 Based on his Kudoktopus masterpiece which features a superb, hand engraved octopus motif which dominates the dial, the Free Kudoktopus by German watchmaker and master engraver takes the original concept one step further, with the creature’s tentacles spilling out from the confines of the inside of the case, to out and over its surfaces, where the stainless steel too has been engraved, so no part of the watch, inside or out, is untouched by the liberated octopus.

A masterclass in the combined arts of skeletonization and meticulous hand engraving, the Free Kudoktopus is an outstanding watch in every sense. Featuring a fabulous three dimensional octopus motif whose tentacles twist and sprawl where normally there would be a conventional dial, it is an unusual but beautifully executed watch, and one which instantly catches the eye.

Over the past decade, this talented young watchmaker has built a reputation for his extraordinary skeletonisation techniques and the elaborately hand engraved dials, and in 2019 received a GPHG awardone the watch industry’s highest accolades. The Kudoktopus is a piece which will delight aficionados of this classical and demanding craft, and in every aspect the uncompromising hand finishing and attention to detail is breathtaking.

The Free Kudoktopus is encased in a round 42mm case of stainless steel, but rather than having the typical brushed or polished finishing, its surface has been entirely worked into a finely mottled matte finish, which makes the engraved tentacles and suction cups stand out even more, against the muted sheen of its uneven surface. Under the sapphire glass, the silvery body and tentacles of the octopus itself are electro-plated with a rhodium coat, and its mass replaces the dial and movement plate, with its head dominating the upper part of the display and its eye at the centre of the otherwise openworked barrel. The writhing tentacles double up as the bridges, which secure the moving components in place, and between the seven and nine o’clock positions the balance and escapement are partially exposed.

Even the hands which display the hours and minutes are also hand engraved and shaped like tentacles in tempered blue steel. Along their length, each of the suction cups have been finely sanded to reveal their silvery base colour, while the recessed rounded centre of each cup is still blue.

Elsewhere, the wheels, gear train and the mechanical architecture of the movement are also visible, and here too each surface has been finished with a perlage decoration, while around the edge of the dial area, any other mounting points are hand engraved.

The beautiful craftsmanship continues on the underside of the movement too, and through the sapphire caseback the tentacles of the octopus reach through to adorn the skeletonised Unitas 6498 hand winding mechanism, and contrast with the engine turned perlage finishing and fan-like spokes of the openworked barrel. Beating at 18’000vib/h it has a minimum of 46 hours of autonomy between winding.

With each piece being meticulously crafted by hand, no two examples of the Free Kudoktopus can be identical, so each one is a unique and exclusive watch from another one of independent watchmaking’s exciting rising talents. A stunningly beautiful piece, it is presented on a black crocodile leather strap with steel pin buckle, with the option of a folding clasp available upon request.