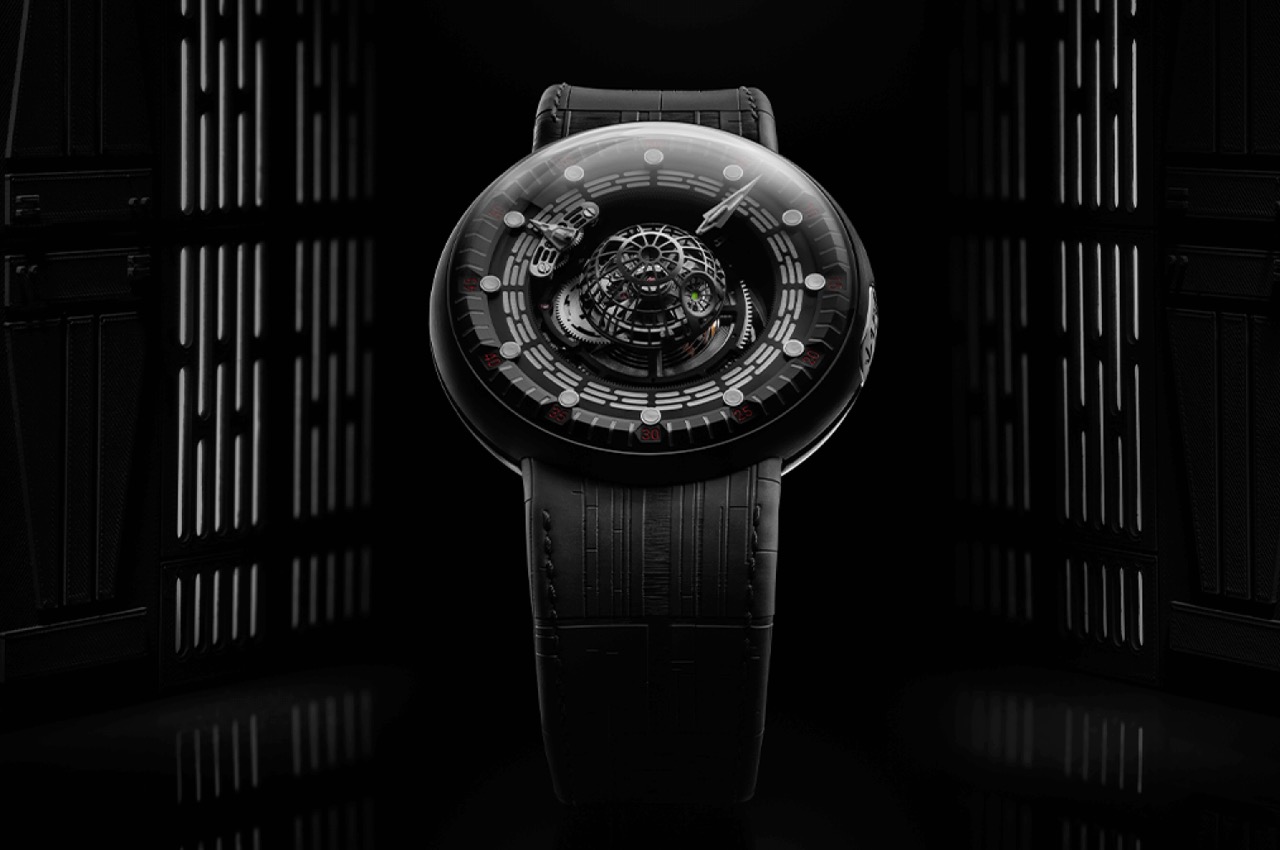 The Death Star Ultimate Collector Set by Kross Studio is an exceptional proposition, and one which seamlessly merges the domains of art and horology. An object d’art, yet one which is wholly functional, The Death Star Tourbillon timepiece, which is at the heart of the collection, offers its owner an unprecedented opportunity to own part of an iconic movie legacy. Deeply inspired by one of the most culturally popular movie series ever made, the watch and its associated collection demonstrates the diversity of the independent watchmaking landscape and the creative genius of this Swiss manufacture.

From their manufactory in Gland, close to Geneva Lake, Kross Studio create extraordinary pieces, characterised by technical mastery and visually stunning aesthetics. While originality and innovation are key elements of their designs, collaboration is also fundamental to their ethos, as demonstrated by their emblematic logo, which not only represents their Swiss heritage, but is a recognised symbol for creative alliances. The Death Star Tourbillon watch is a distinctively complex piece, designed in partnership with LucasFilm, in honour of the Star Wars movie saga.

The watch carries a case sized at 45mm diameter, with a height of 20mm. Constructed from titanium, with a black diamond-like carbon (DLC) finish, the prominent proportions of the housing are lessened by its minimalist styling. Ensuring that its profile remains pure, it has a lugless design and is bereft of a crown. Instead, within the case side, a recessed button, engraved in authentic  Aurebesh script, which translates as “time set” and “push to release” invites the wearer to adjust the time or wind the watch by releasing the D-ring which is placed out of sight within the case back. A striking structure, the case is topped with a high-domed sapphire crystal, setting the scene for a truly spectacular three dimensional dial side panorama.

Immediately the eye is drawn to the dynamic one-minute central tourbillon, whose cage replicates the northern hemisphere of the Death Star in miniature, complete with a diminutive green disc, representing the galactic super-destroyer’s kyber crystal laser cannon. An open-worked arrangement ensures that one can see deep within the calibre, where the stealthy, pulsing mechanisms give the piece added drama, and outer-worldly appeal.

Adhering to the styling codes of the model, the hands are unique and rather special indeed. The hour hand takes the form of an Imperial-Class Star Destroyer, and is accompanied by a minutes hand styled like a Super-Class Star Destroyer. Fixed to a peripheral display, they orbit 360 degrees around the central tourbillon. Finishing this extraordinary dial, the minute track at the perimeter is raised and is inscribed with vivid red double digit numerals, while petite dots serve as markers for each hour. Exhibiting an edgy, cool styling touch, the hour ring has been applied with bright blue Super-Luminova enhancing it after dark.

Not limited to its impressive design aesthetic, the Black Star Tourbillon watch is powered by an outstanding calibre, the KS 7’000 manual-winding in-house movement. Notably, the calibre has a generous power reserve of five days, derived from a single and centrally placed spring barrel. The superbly executed finishing of the components is disclosed through a sapphire section in the caseback featuring the emblematic cross of the company, around which the D-ring which enables the winding is discreetly placed.

A pair of miniature plaques, inscribed with Aurebesh script are also located on the underside of the case, at the 12 and 6 o’clock positions. At first glance they appear to be simply an additional Star Wars inspired styling touch, however, they are in fact quick release buttons for the interchangeable straps - a small addition, but nonetheless, one which demonstrates the ingenious and considered approach taken by Kross Studio to every design nuance of this remarkable timepiece.

On its own, this incredibly detailed Black Star Tourbillon watch would be an excellent proposition. However, when a piece such as this is presented as part of a significant and exclusive package, its desirability is enhanced multifold. Each piece acquired will be presented in an official reproduction Imperial kyber crystal container, made from more than 700 components, and measuring more than one metre in length. Featuring an interior divided into nine individual storage units, it includes a trio of removable capsules, one containing the watch, one with two additional straps and a third which contains an original kyber crystal used as a movie prop in Rogue One: A Star Wars Story - the first time a kyber crystal prop such as this will be released for public ownership.

A magnificent tour de force for this forward-thinking independent company, the Death Star Tourbillon watch and Death Star Ultimate Collector Set by Kross Studio is supplied with a black calfskin leather strap, and two additional rubber straps in red and black, and is a limited release of ten pieces worldwide.