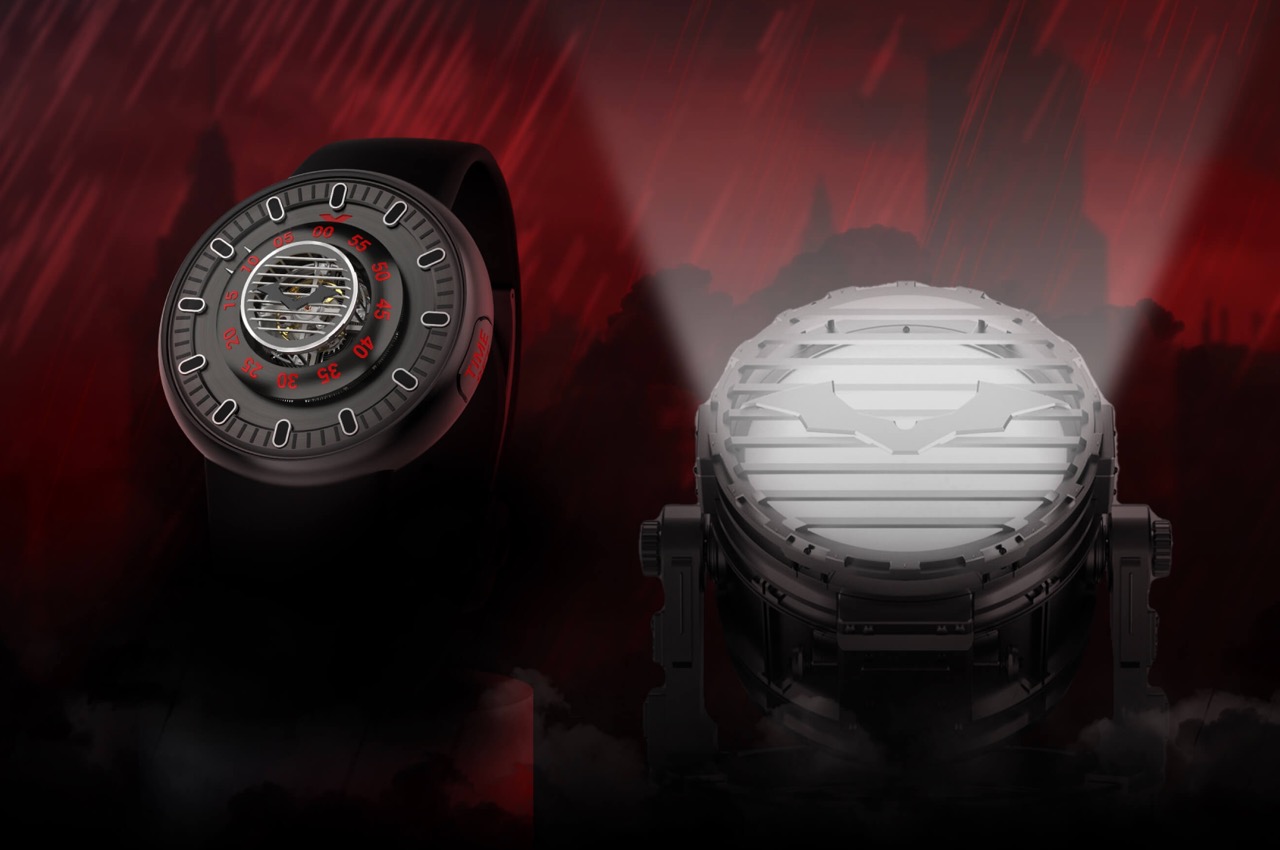 With thrilling aesthetics and a commanding dial arrangement, the Batman Tourbillon by Kross Studio combines a culturally popular theme with Haute Horologerie craftsmanship. Inspired by the Warner Bros. movie “The Batman” the watch captures the drama of the legendary character, while also demonstrating the flair for design and mechanical mastery of this exciting independent watch company.

From their manufactory in Gland, close to Geneva Lake, Kross Studio create marvellous masterpieces. Exhibiting extraordinary complexity, each piece in their exclusive portfolio is characterised by originality and innovation. Aimed at the discerning collector who has a penchant for technical prowess infused with contemporary styling cues, timepieces by Kross Studio are passed to their owners in highly collectible and fully functional art piece presentation boxes. Produced in association with Warner Bros. the Batman Tourbillon exemplifies the powerful persona of the super hero, lending the piece a striking presence on the wrist.

The case of the watch is constructed from Grade 5 Titanium sized at 45mm in diameter, and resting 20mm high on the wrist. A black diamond-like carbon (DLC) finish ensures that the prominent proportions are diminished somewhat, while its streamlined profile has been sculpted to ensure a comfortable wear. Styled without lugs, it is also bereft of a crown. Instead, within the case side, a recessed button, marked “time set” invites the wearer to adjust the time or wind the watch via the D-ring placed within the case back. A high-domed sapphire crystal, heightens the pleasure of the case form, and beneath it a spectacular three dimensional dial is showcased.

At the centre, and revealed through a louvred Bat-Signal-shaped cage, Kross Studio’s signature one-minute central tourbillon dominates. Cleverly designed to adhere to the theme of the piece, the open worked architecture of the cage defines the character of the watch, while also displaying every intricacy of the mechanism.

Renowned for their creativity, Kross Studio have endowed the model with exceptional time indications, enabled without the use of traditional hands. On a black DLC-coated titanium disc finished with a meticulous radial-brushed décor, the minutes numerals are rendered in blazing red double-digits. As the disc rotates, the numerals line up with an equally vivid triangular marker. Just behind the minutes disc, a double-pronged hand rotates to display the hour via oval indices on the outer dial. Referencing the emblematic silhouette of Batman’s pointed ears upon his cowl, the effect of the polished motif is a subtle inclusion, but it adds an air of mystery to this remarkable multi-level façade.

On turning the piece over, the arrangement of the KS 7’001 manual-winding in-house movement is disclosed through a sapphire section in the caseback which features the emblematic cross of the company. Around the rim of the sapphire section, the ingenious D-ring which enables the winding of the watch is discreetly placed. The movement itself has a superbly executed finish and beating at 21’600 vph it is equipped with a generous power reserve of five days. Notably, for this model, the barrel cover has been decorated with a motif of one of Batman’s favourite weapons, the batarang. Also, on the underside of the case, at the 12 and 6 o’clock position, a pair of quick release buttons allow the wearer to easily change between the trio of straps supplied with each piece.

The prestige of the Batman Tourbillon watch is further enhanced by its incredibly detailed presentation package. Much more than simply a watch box, this highly collectible objet d’art takes the form of a rooftop Bat-signal in miniature, complete with an illuminated projector. Resting 32.5cm high it is a splendid accompaniment to this extraordinary watch and is without doubt a conversation-starter, or will be the perfect distraction upon the executive desktop.

The Batman Tourbillon by Kross Studio is delivered with a choice of three interchangeable straps, in black calfskin leather embossed with a pattern which recalls Batman’s armour, black rubber and also red rubber, with black DLC titanium clasp. The edition will be a strictly limited and numbered series of 10 pieces.