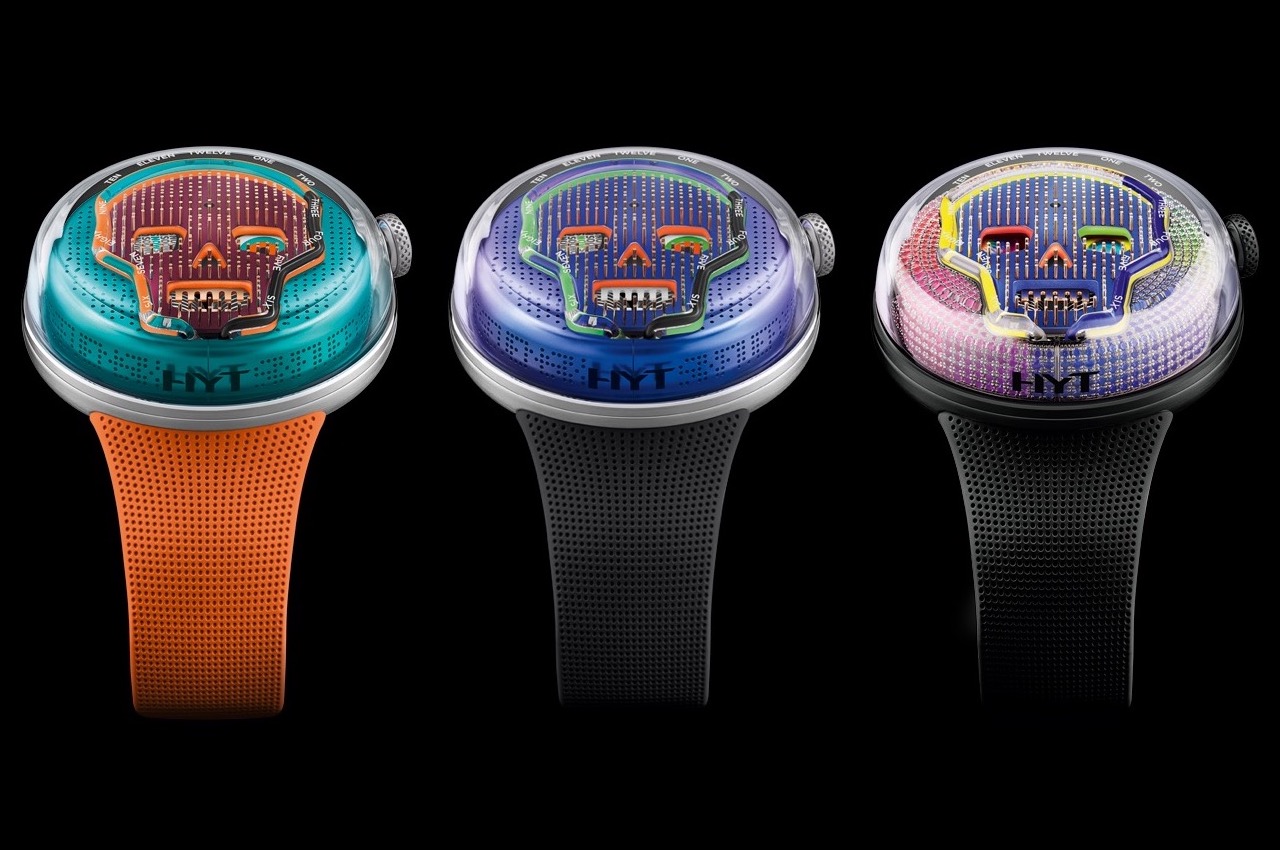 From one of the most unconventional independent Swiss watch companies of our time comes a piece whose flamboyant colour and exaggerated proportions is guaranteed to turn heads every time. Set with no fewer than 668 precious stones in a literal rainbow of colour, which surrounds a dominating skull motif, the SOONOW Instant Rainbow by hydro-mechanical specialists HYT is a spectacular piece, whose sheer extravagance makes it futile to attempt to conceal.

Behind every HYT timepiece lies the young company’s unique approach to its art form, which breaks one of the greatest horological taboos by combining the forbidden fusion of liquids and sensitive mechanicals in close proximity, which in watchmaking have never before been compatible.

Even If we have become accustomed to HYT’s extraordinary and uniquely distinctive watches, with their heaving bellows and the inimitable coloured fluid technology for indicating the time, the new SOONOW Instant Rainbow is even more dramatic, taking the brand’s formula into the realms of modern art.

A dazzling blaze of colour and depth, the SOONOW Instant Rainbow is exceptional in every aspect. The huge sapphire dome which makes up most of the upside of the watch is a cover which exposes an incredible display which combines the vivid energy of Super LumiNova to accentuate its functional side, and the three dimensional effect of a forest of vertical pins, and the big skull figure at its centre, which is surrounded by a carpet of gemstones, which cascades over and around the side.

Even aside from the horological complexity for which HYT is renowned, the invisible settings of the 668 sapphires, tsavorites and amethysts, and the 313 solid gold pins on top of the blue/purple adonised titanium dial is astonishing.

The SOONOW displays the time in hours via the two fluids; one transparent, and the other dyed with blue, which are propelled hydraulically through the fine glass capillary that forms the outline of the skull. Beneath it a track of luminous yellow distinguishes clearly the point where the two fluids meet and which defines the moment in time. The eye sockets are functional too, and in the left the power reserve is shown, where in the right, a disc with luminous markings, which indicates the seconds, is constantly rotating.

The two signature bellows are partially concealed behind a grille of gold teeth to complete the facial effect on the dial side, while on the underside the proprietary manual winding mechanism is revealed under a sapphire caseback. Manufactured to the uncompromising standards of Haute Horlogerie, the movement uses traditional mechanics for the timekeeping, connected by a cam system to the hydraulic rams which compress and release to advance or retract the fluids in the uniquely HYT solution.

Designed and developed in association with advanced movement specialists Chronode, the remarkable movement beats at a brisk 28’800 vib/h and fully wound boasts a minimum of 65 hours of power reserve.

A truly spectacular wristwatch from one of contemporary independent watchmaking’s most progressive innovators, the HYT SOONOW Instant Rainbow is presented on a black rubber strap with folding titanium clasp, and has been produced in a very limited edition of only eight pieces, making it a prized collectible for the outgoing connoisseur of modern watchmaking.