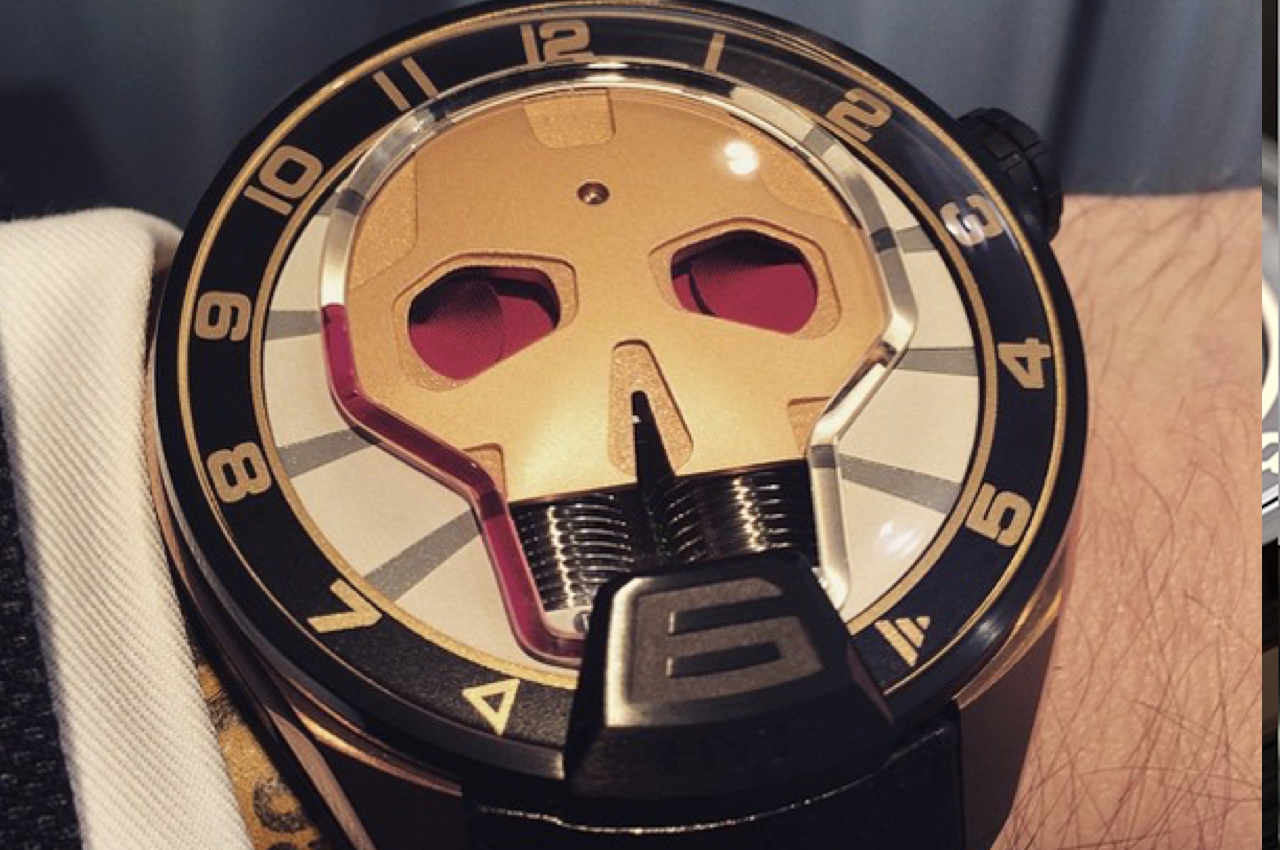 It’s not so much of a stretch as to imagine the HYT Skull Red Eye having been conceived and brought to life in some dimly lit laboratory, by a wide-eyed, sleep deprived, bespectacled scientist, obsessed with the containers of chemicals and liquids which bubble and effervesce all around him. In fact, that’s not so very far from the truth, and with its spooky red glow and sinister glaring eyes, the Skull looks like it’s just come straight off the set of an old black and white horror movie.

Replace that image with gleaming, immaculate, ultra-modern workshops, and a team of highly skilled young watchmakers in the heart of Swiss watchmaking, whose work defies convention as they create these genuinely incredible watches, which are part sci-fi, part age-old hand machining and all presence.

Bold, brooding and absolutely uncompromising, in 18Kt rose gold and black DLC titanium, the Skull Red Eye by HYT is an unavoidable wristwatch which evolves the company’s signature hydro-mechanical technology, bending its liquid hours capillary around the profile of the skull which dominates the dial.

Making full use of many of the distinctive characteristics of the HYT design codes already present, the Skull theme is perpetuated throughout the watch, as the big black titanium dome at the 6 becomes the lower jaw, and the steel bellows, which force the vivid red viscous liquid around the dial, take on the appearance of teeth. It is very cool, and has an enormous presence on the wrist, in either day or low light environs.

Like the entire HYT portfolio, which has turned one of watchmaking’s golden rules on its head, with the use of liquids in such close proximity to its delicate mechanical horologic components, the Skull Red Eye rejects the conventional approach to displaying the time. There are no minutes, but the hours can be read sufficiently well so the minutes can be approximated with a fair degree of accuracy. Inside the eye sockets, backlit by the weird red glow, the seconds and power reserve are displayed.

The use of fluids to relate the time in this way is unprecedented, and behind its simple beauty beats a hand finished manual winding mechanical movement of profound horologic complexity, and proprietary technical innovation.

To the rear, a red-tinted sapphire case back reveals the stripped back plates, and the balance and escapement, which along with the barrel and gear train are compacted into space above the pair of steel bellows.

At 51mm in its 5N rose gold case, the HYT Skull Red Eye is a luxury piece, but not for the faint of heart. It is presented on a black leather strap, and it secures with a PVD titanium folding clasp.