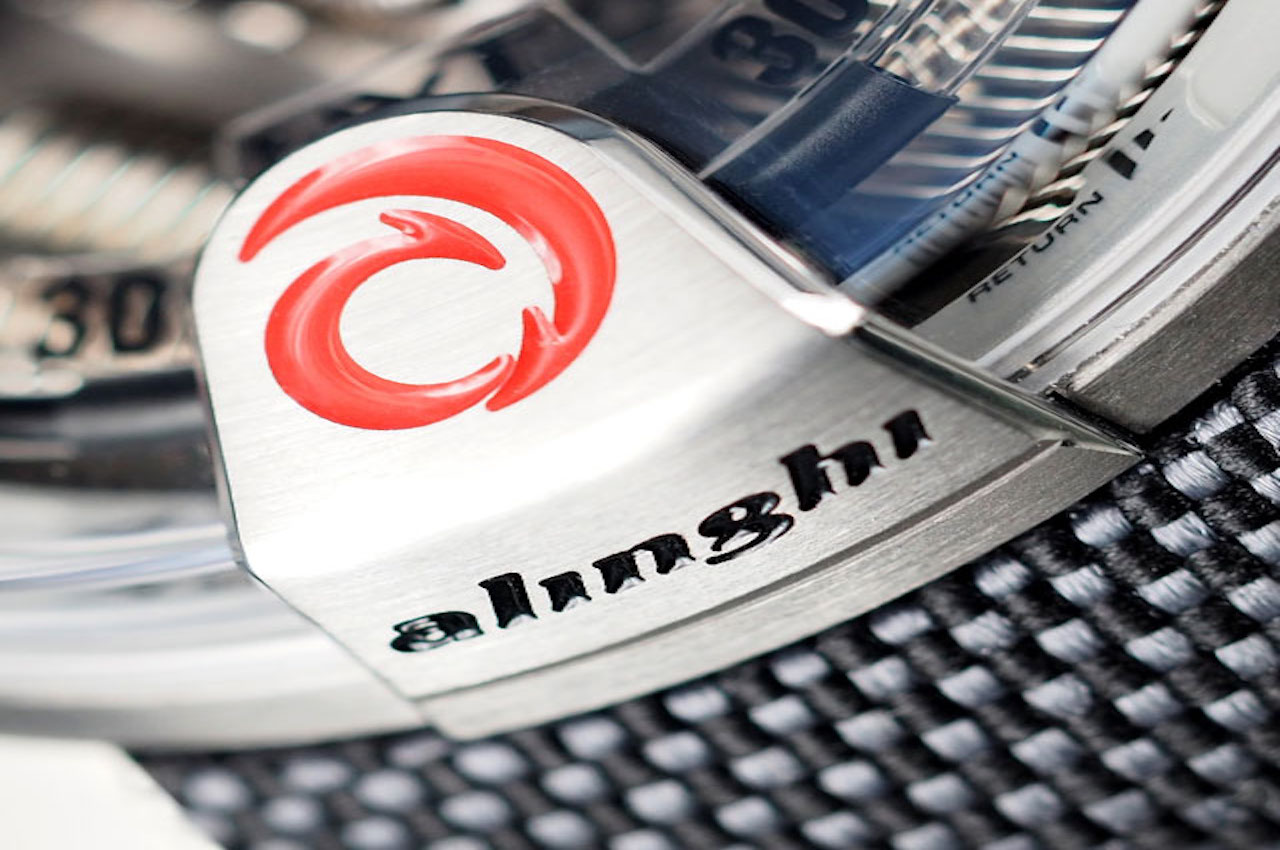 The H2 Alinghi is a truly remarkable wristwatch which celebrates the enduring partnership between the ocean racing team and the watch company, and with its unique HYT ‘fluid hours’ formula, and skeletonized mechanical heart is as unprecedented in its aesthetics and in its time display as it is utterly fascinating in its technical complexity.

Bold and imposing in its 48.8mm construction of brushed and polished titanium and a mass of sapphire glass, with rubber clad crown and prominent crown guard, it is a magnificent beast. Brimming with detail and exquisitely crafted throughout, the H2 combines the highest principals of traditional watchmaking with HYT’s futuristic, convention-defying innovation.

The huge sapphire crystal with squared-off edge rises high above the bezel and covers the entire head of the watch, its glass wall effect offering a spectacular multi-level vista of the hydromechanical array within. Here, the black hour indication fluid oozes through the fine glass vein around the dial, past the numerals on the aluminium inner bezel, slowly drawn through in a retrograde twelve hour cycle, as the big steel bellows compress and then release at the point of six o’clock, when over the next five seconds the fluid tracks back to start again.

From the center, a single black steel pointer, its arrow tip coated with Super-LumiNova, points to the minutes on a ring of sapphire which is suspended above the movement. As it strikes the thirty-minute mark on half-past the hour, the hand jumps across space at the six, where the minute's ring is interrupted by the large titanium dome.

An HYT signature and adorned with the red Alinghi team logo, the raised titanium dome conceals the reservoirs beneath, from which two fluids; one water-based with black dye, the other a denser clear oil base, emerge and retract, their incompatible viscosities preventing any seepage between the two.

On the dial at the 3 o’clock position, a red pointer moves between three settings controlled by the crown, to facilitate time adjustment (H), winding (R) or neutral (N), and opposite at the 9, the unusual feature of a thermal indicator in blue and white.

Providing the energy for all of this is the H2 centerpiece, the exceptional Calibre 201 hand winding movement, designed and created exclusively for HYT by the advanced horological innovations firm APRP Renaud et Papi. A technical tour de force, it is reduced to its component form with its tiered gearing, levers and hydraulic rams laid bare and exposed. The mesmerising beat of the large balance wheel and escapement, suspended beneath an arcing bridge animates the spectacle. To the rear, the sapphire case bottom reveals the stripped back plate and the twin barrels which between them store some 192 hours, or eight days, of energy.

At 48.8mm the HYT H2 Alinghi is a stunning and dominating watch which packs enormous presence on the wrist, yet with its lightweight, short lugs and fabric strap making for a wrist-hugging fit, it does wear very comfortably for its size.