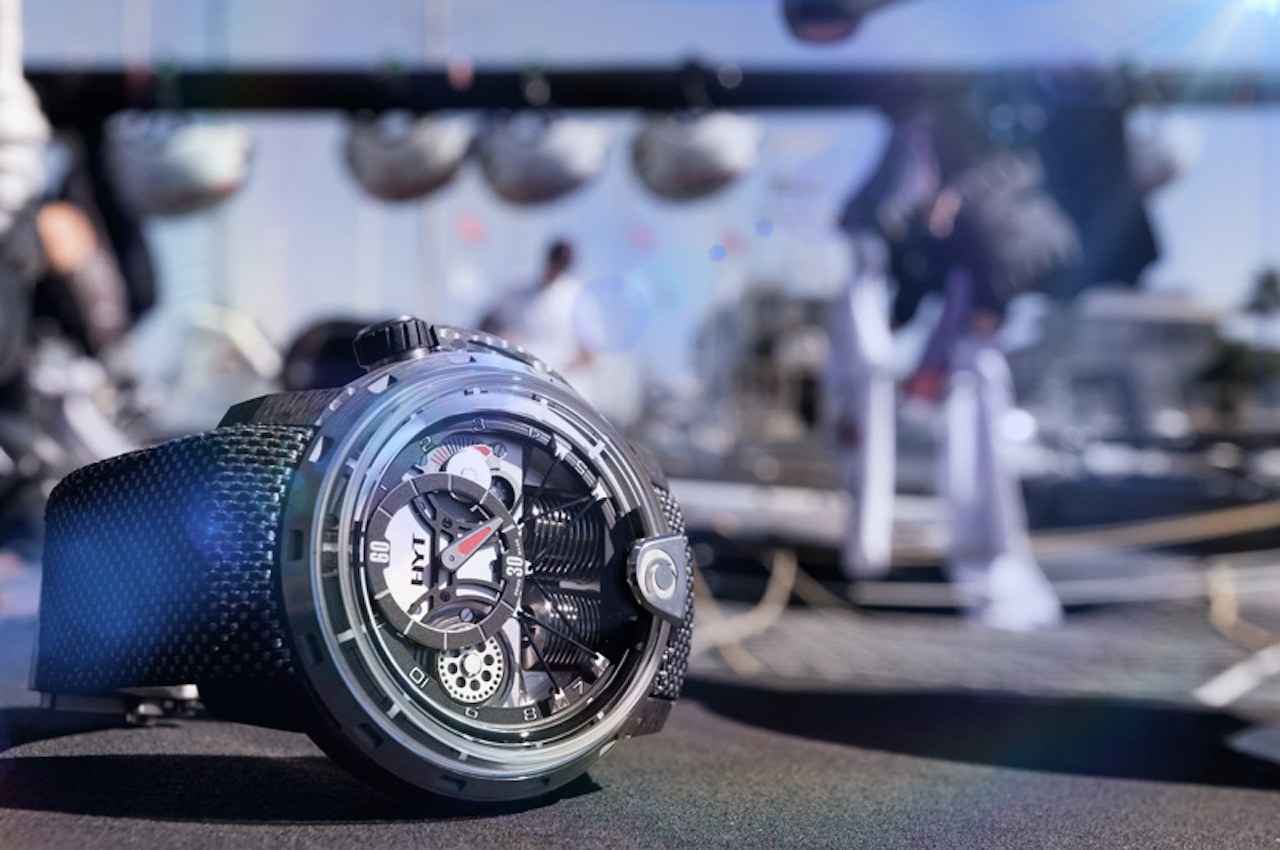 With its debut in 2012, the other worldly H1Titanium catapulted the young HYT watch company and its game changing technology straight into the limelight. Winning the GPHG Innovation award at the end of that year, its alien appearance, and taboo combination of liquids and horology turned perceptions on their head, and from that dramatic entrance, one of the most dynamic and successful independent watch brands has continued to produce ever more extraordinary variations on its award winning concept.

In the third iteration of HYT’s association with one of ocean racing’s most illustrious names, the H1 Alinghi is an absolutely magnificent piece, in its massive case of micro blasted and satin finished titanium, with pronounced crown guard and rubber clad crown, topped off with a domed sapphire crystal and the sculpted three dimensional features with yacht racing inspired trapeze detail beneath, it is nothing short of spectacular.

Centred around its unique technical tour de force, which uses fluids and miniature hydraulics working in concert with a hand winding mechanical movement, the HYT H1 Alinghi is an immaculately executed piece of contemporary Haute Horlogerie, which is as unprecedented in its aesthetics as it is utterly fascinating in its technical complexity.

Underneath the sapphire crystal, the dial area is pared back to reveal a chapter ring coated with Super-LumiNova around the edge, which sports applied numerals and indices, and opens onto the white openworked bare metal centre, where the minute hand is accented in red varnish on a central sapphire dial, with the small seconds like a deck furler, and the winch-like power reserve indicator either side.

Immediately above the luminous chapter ring sits a super fine glass capillary and through it, a translucent black liquid is drawn around over the hour indices via HYT’s proprietary hydro-mechanical technology.

As the two bellows in the lower half of the dial expand and contract, from tiny reservoirs beneath the prominent polished titanium dome at the 6 they force two immiscible fluids, one dyed black, the other clear, around the little tube, in a twelve-hour retrograde cycle to display the hours. The differing and incompatible viscosities of the fluids safeguards against cross-contamination

While its unconventional and innovative approach to the age old standards of watchmaking and time display may seem unfamiliar at first glance, its classical regulateur configuration means it’s intuitively simple to understand, and quite irresistible to the eye.

Around the back, a sapphire caseback with Alinghi inscribed bridge reveals the superb HYT Calibre 101 hand winding hydro-mechanical movement, and a view of its stripped back plates with horizontal Geneva stripes, the balance and escapement, along with the barrel and gear train which are all compacted into the upper half, to accommodate the pair of rhodium plated bellows. Fully wound, it is good for 65 hours of power reserve.

At 48.8mm the HYT H1 Alinghi is a stunning and dominating watch which packs enormous presence on the wrist, yet with its light weight, short lugs, close-fitting textile fabric strap making for a wrist-hugging fit, it does wear very comfortably for its size.