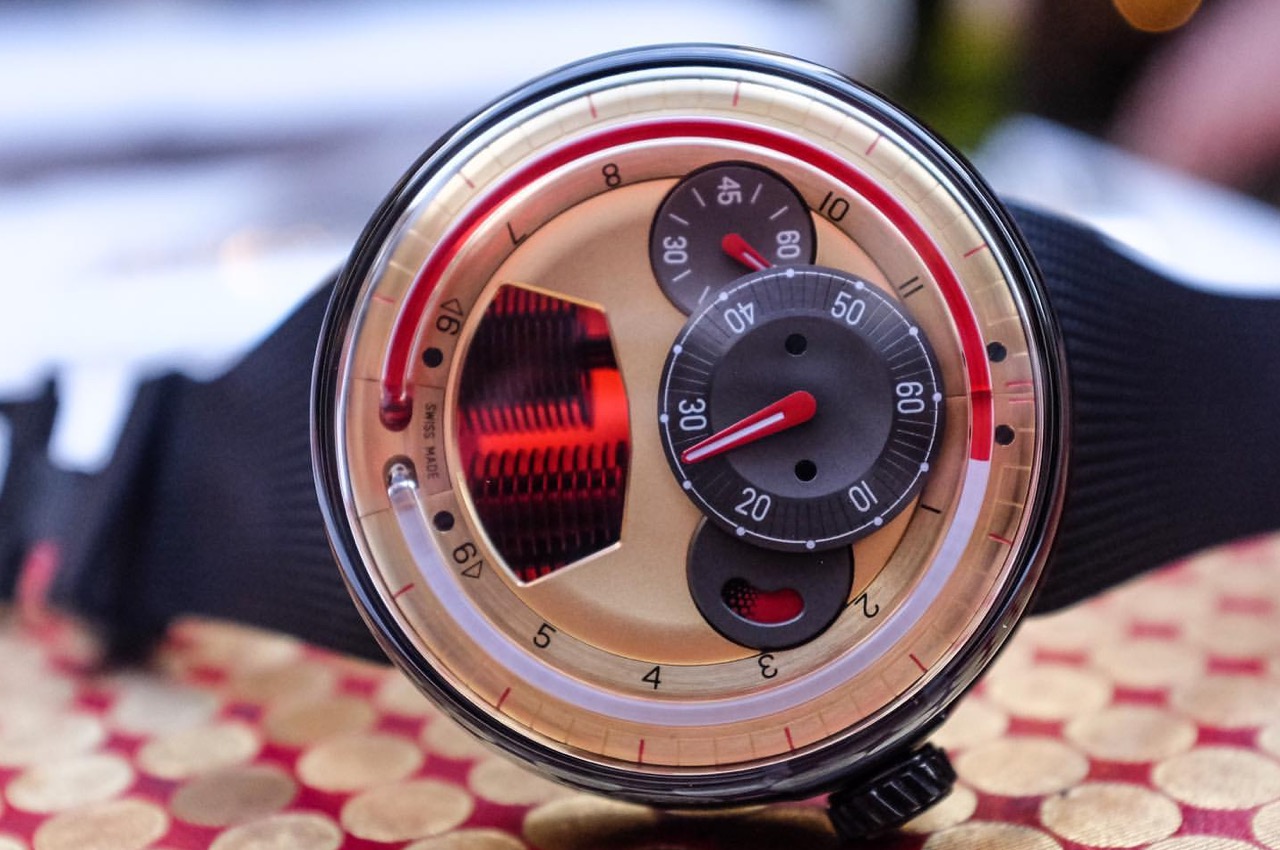 The HYT H0 Gumball 3000 is immediately outstanding thanks to its unique, mostly glass, capsule like case, whose tall, straight sides provide an astonishing three dimensional perspective on the part analogue, part liquid display, and of course the fascinating twin bellows which defines the brand’s highly individual and distinctive approach to watchmaking. A strictly limited edition of only eight pieces, the HYT H0 Gumball 3000 is a spectacular rarity of uncompromising presence, created to commemorate the 2019 running of the underground amateur sports car cavalcade, the Gumball 3000 rally, which takes its one hundred entrants across ten countries, from Mykonos to Ibiza in eight days.

Measuring almost 49mm across, and close to 19mm tall, the HYT H0 Gumball 3000 is certainly a commanding piece on the wrist, and specific to this exclusive edition, inspiration has come from an iconic sports car and Gumball entrant, with cool bespoke details marking the occasion itself from a driver’s eye view in the bright rosso corsa red Ferrari 355 Spyder of Oliver Al-Falah and The Peaked Lapel.

The sapphire glass which encases the the watch is seated into a base of dark anthracite DLC stainless steel, and etched into the inside, the names of the eight stopover cities on the 2019 Gumball 3000, standing out clearly against the bright gold mass of the dial within.

Almost immediately the eye is drawn to the vivid red fluid inside the super fine glass capillary which circles above the gold dial like an enclosed monorail, emerging and disappearing at the 6. Bathed in the red of the window above them, the two bellows which dominate the lower half of the dial expand and contract to force two immiscible fluids, one with red dye, one completely clear, around the little tube, displaying the hours where they interface as they creep around in a twelve-hour retrograde cycle.

A cluster of three anthracite subdials with scarlet indicators display the minutes on the elevated central dial, which is flanked by the small seconds and power reserve indicator on either side.

Around the back, a sapphire caseback reveals the HYT Calibre 101 hand winding movement, and a view of its stripped back plates, the balance and escapement, along with the barrel and gear train which are all compacted into the upper half, to accommodate the pair of rhodium plated bellows. Fully wound, it is good for 65 hours of power reserve.

In every sense, the HYT H0 Gumball 3000 is a watch which defies convention and exudes a lust for life. From its sheer presence and distinctive futuristic aesthetics to the pioneering technical innovation which makes it all possible, it brings together all of the pioneering independent company’s know-how in this one astonishing watch. 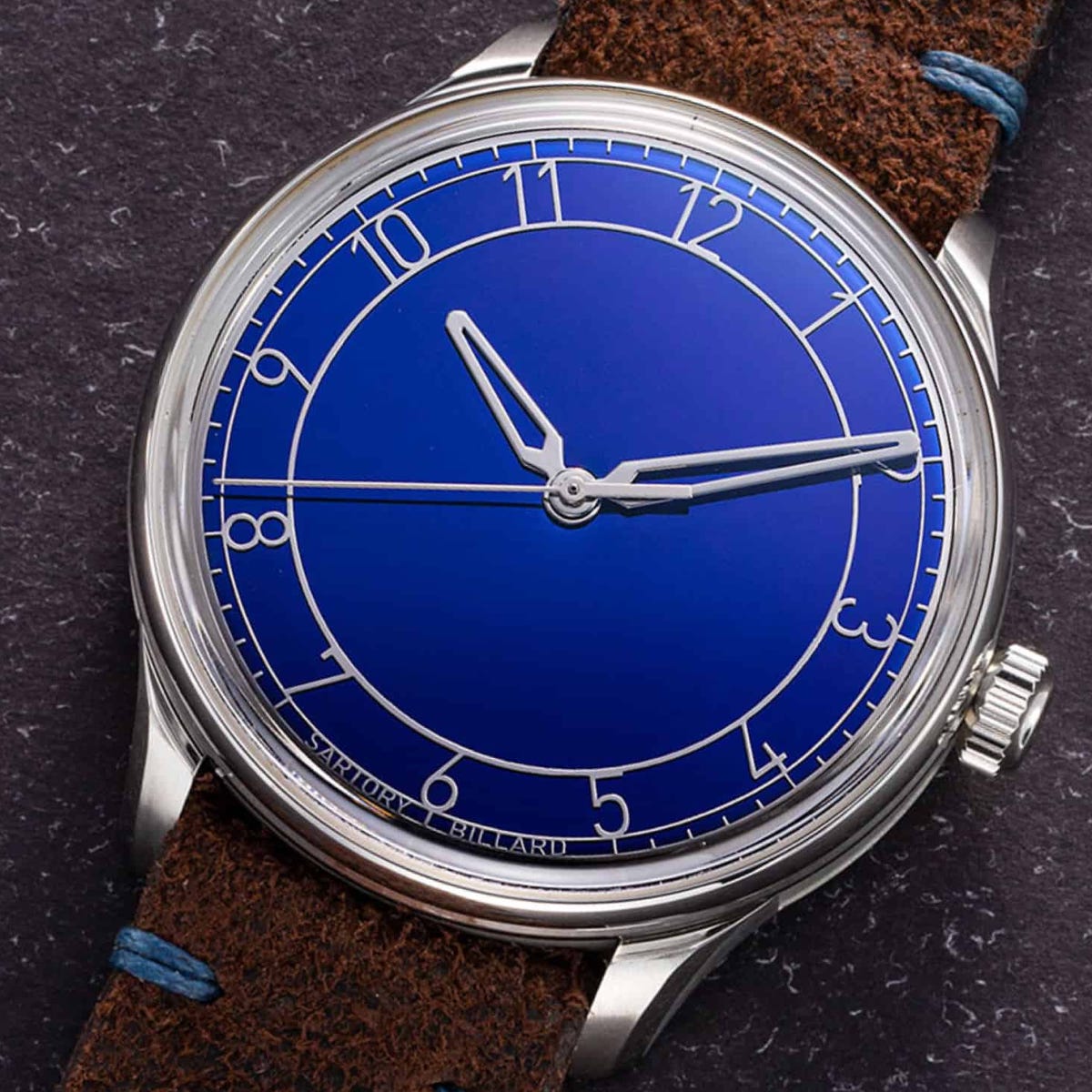 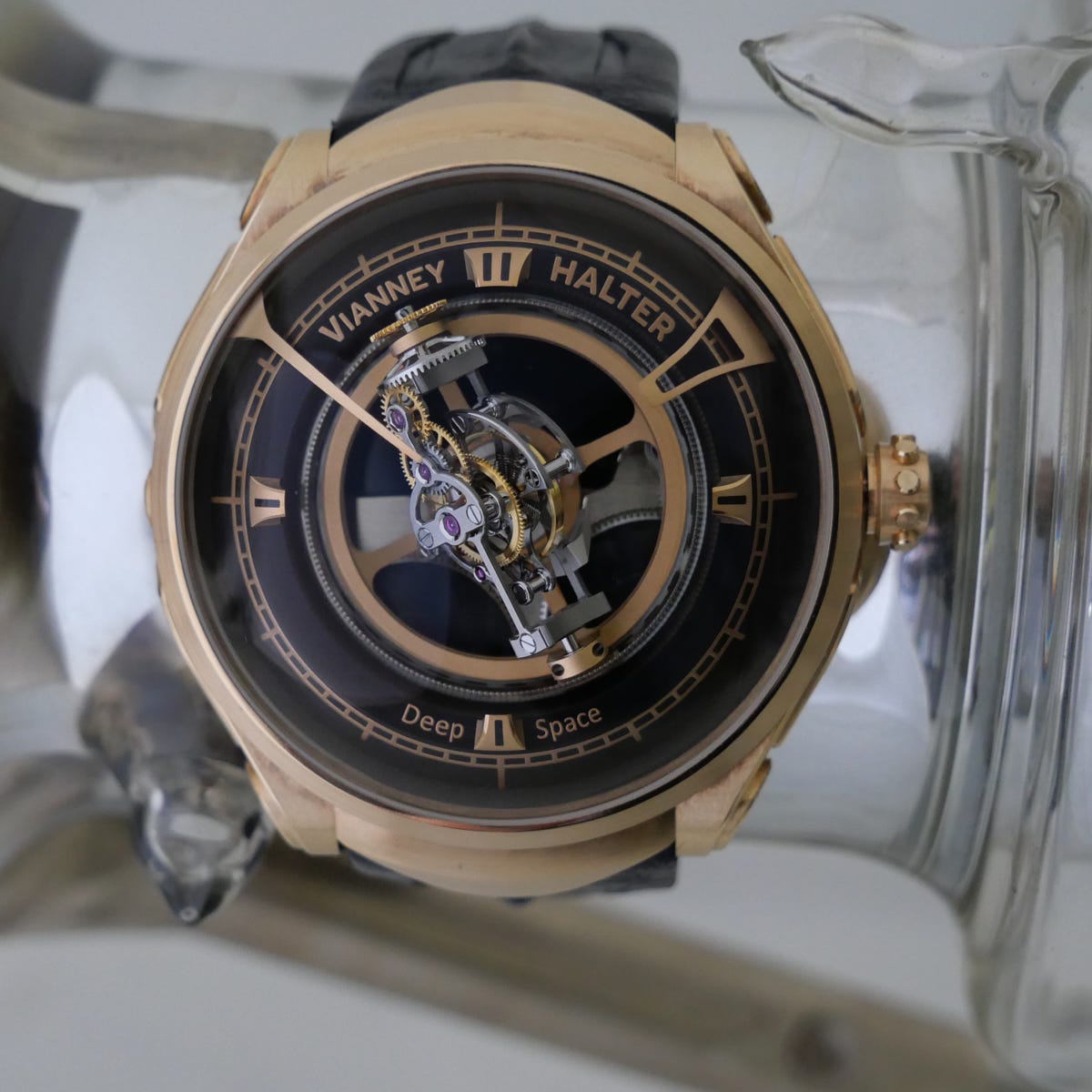 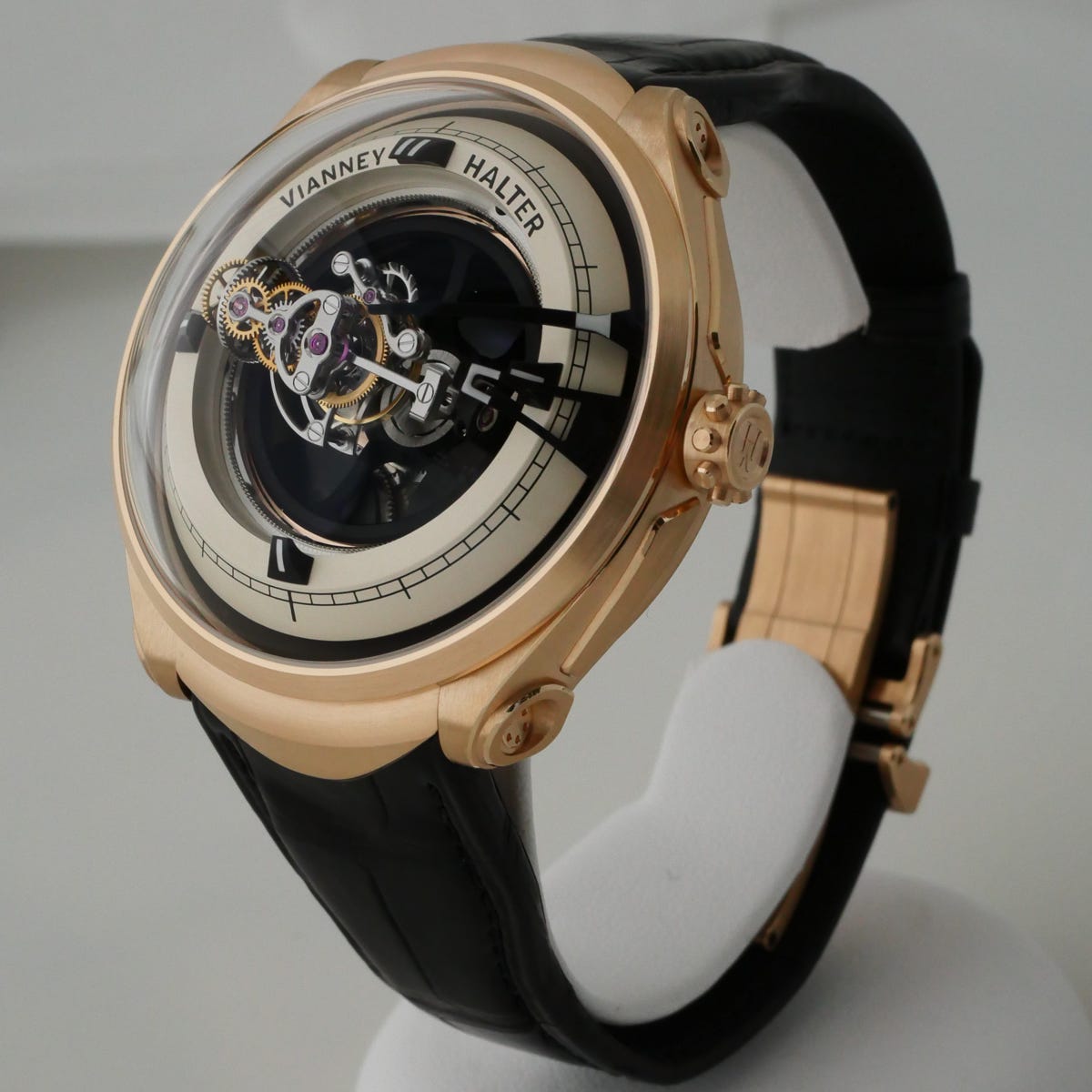 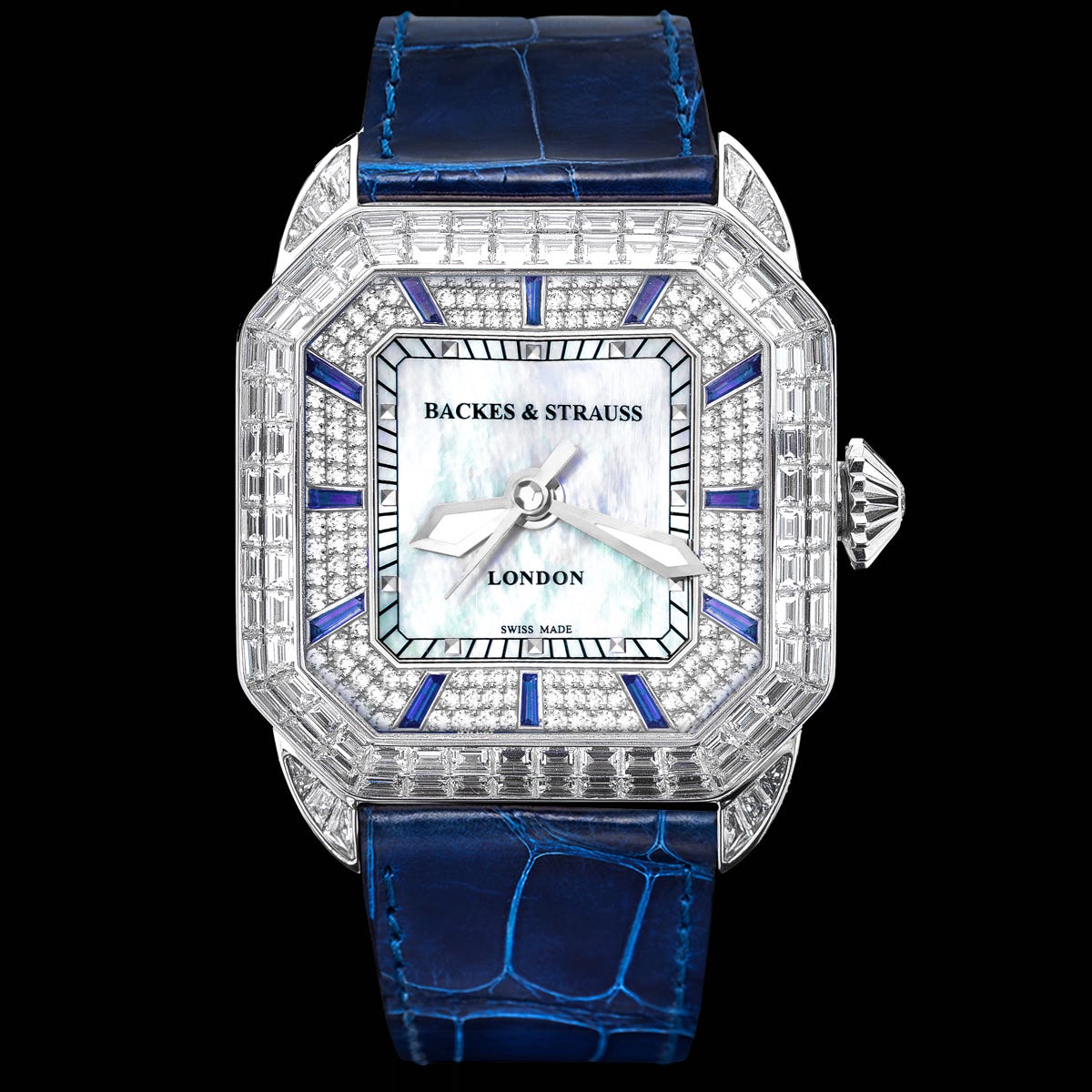