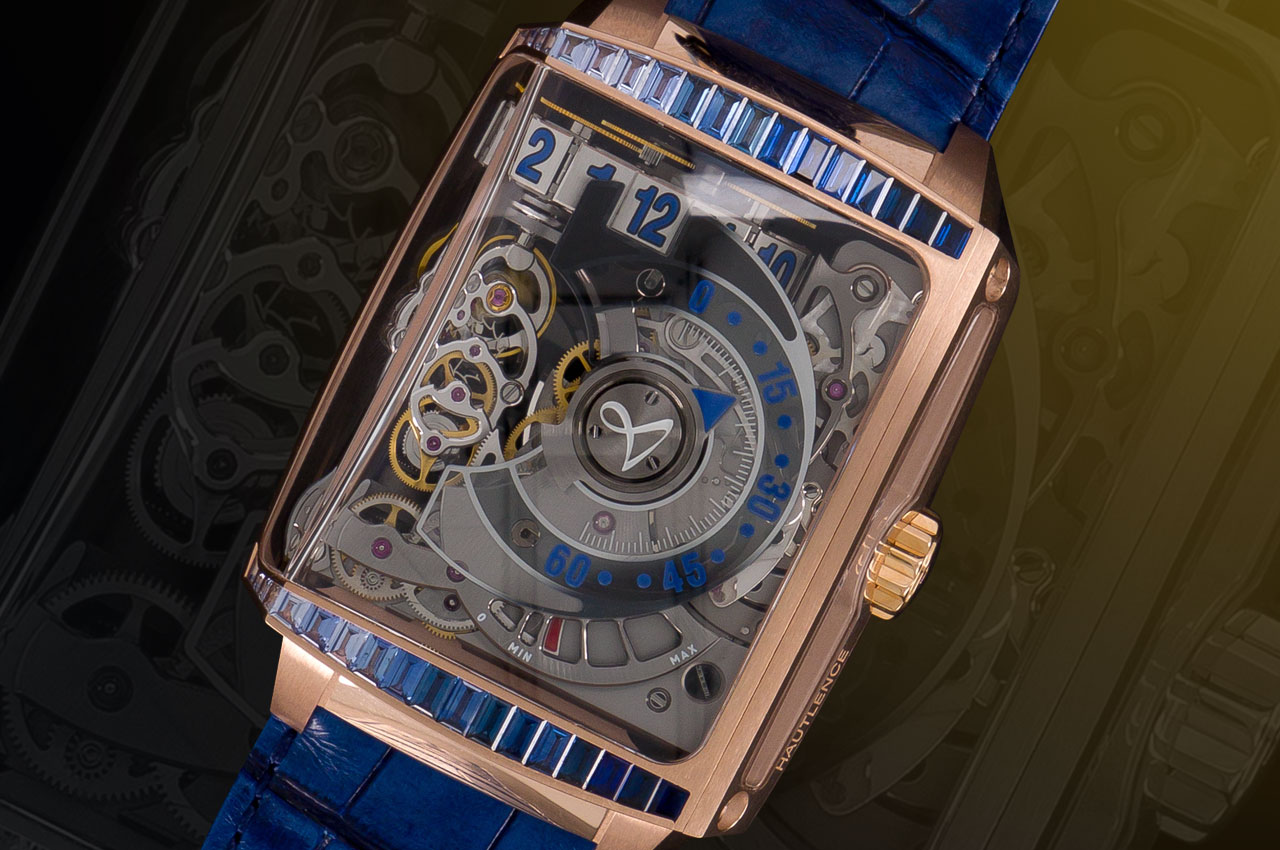 From an independent company which specialises exclusively in going where watchmaking has never gone before, creating its most extreme concepts and continuously pushing the boundaries, the magnificent Hautlence H2 is a watch which reimagines conventional parameters in its technical complexity, as well as in its eye-catching futuristic aesthetics.

Bedecked in baguette cut blue sapphire gemstones which completement the subtle blue detailing throughout the watch, this exceptional one-off is absolutely breathtaking, and measuring 50mm in length x 42mm across and 17.4mm in height is a watch which has immense presence on the wrist.

Revealing the animated time display, and exposing to maximum effect the extraordinary mechanical movement within, the Hautlence H2 is constructed in 18kt pink gold, which is pared back to little more than a rectangular frame, as on all four sides of the watch, sapphire crystal glass offering an uninhibited perspective of every minute, beautifully hand finished detail and component inside.

The time is shown in hours and minutes, with the latter displayed in the centre of the dial upon a smoky sapphire panel where a blue arrow and markings indicate the minutes on a retrograde arc, and which springs instantaneously back to zero at the end of the fifty-ninth minute. In the top left corner, the hours are displayed on a linked track of twelve square pallets, which move along as each hour ends so the new current hour numeral is highlighted in a squared printed box. In contrast to the immediacy of the retrograde minutes, the progression from one hour to the next is softened from a jump to a slower gradual creep, thanks to the central regulator which absorbs the movement by rotating 48 times at the top of each hour, this allowing the trailing chain of numerals to move forward over a period of three to four seconds. At the same time this is happening, the mobile bridge also rotates through 90°, completing a truly captivating moment of mechanical art in motion.

Entirely conceived and developed in-house and fully exposed, the self-winding Calibre HL 2.0 movement is as much a feature of the watch as it is a necessity, as its constantly pulsating balance which is mounted on a rotating mobile bridge ensures that even from a distance there is a subtle motion, which is virtually irresistible to the eye.

The mechanism is one of profound complexity and precision micro-engineering, with the energy demands of the time keeping and the animated mechanicals split between two barrels, with a primary barrel which is fed directly from the automatic winding system, which then distributes power to a secondary barrel which is devoted to driving the complex functions, so each dedicated to its own purpose. Throughout, the exacting standards of haute horlogerie are applied to each and every one of the 552 components, with various techniques from satin brushing, to mirror polishing, to hand bevelled anglage.

For all of its complexity, and the technical challenges of its glasshouse construction, the Hautlence HL2 is a remarkably user friendly timepiece, which is perfectly comfortable on the wrist and essentially practical too, although perhaps not in a daily wearer sense. It holds an impressive power reserve of 45 hours and beats at a leisurely 18’000 vib/h.

The Hautlence HL2 is a wristwatch which goes way beyond mere functionality.  Created by the same family company which owns H. Moser & Cie, the piece demonstrates the technical ingenuity and prowess of this avant garde brand whose name is an anagram comprised from the letters of its home town Neuchatel, emphasising the origins of the brand’s horological DNA. 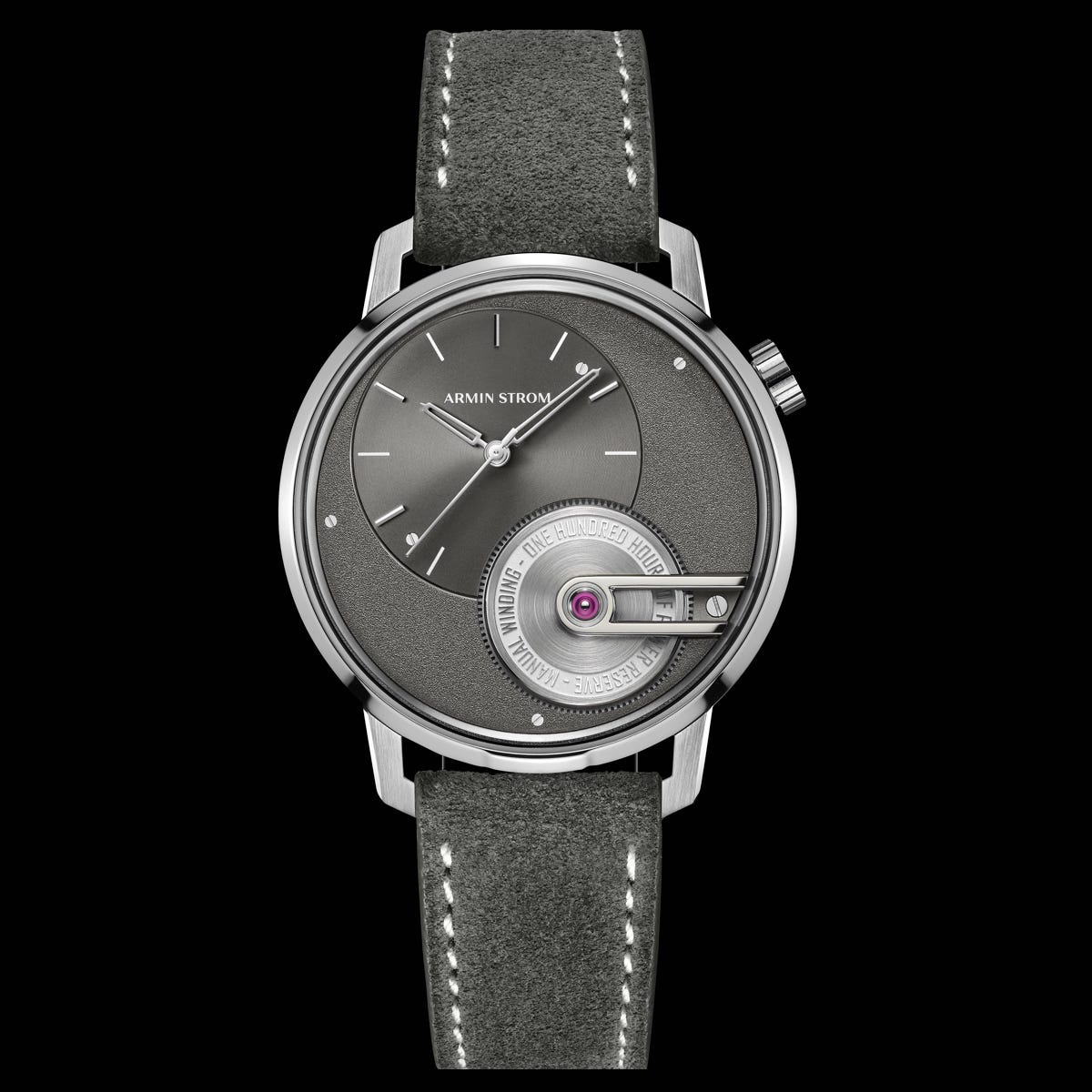 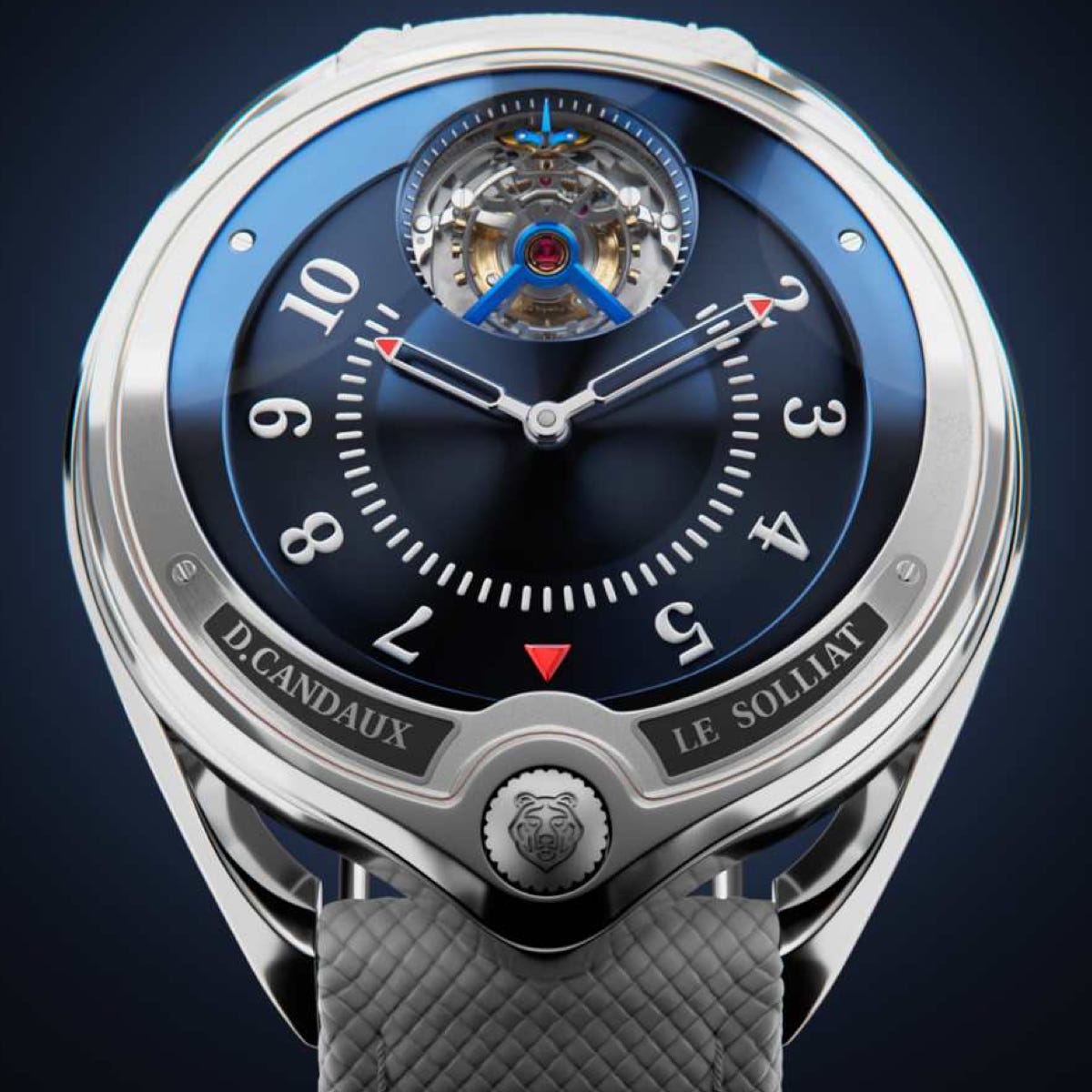 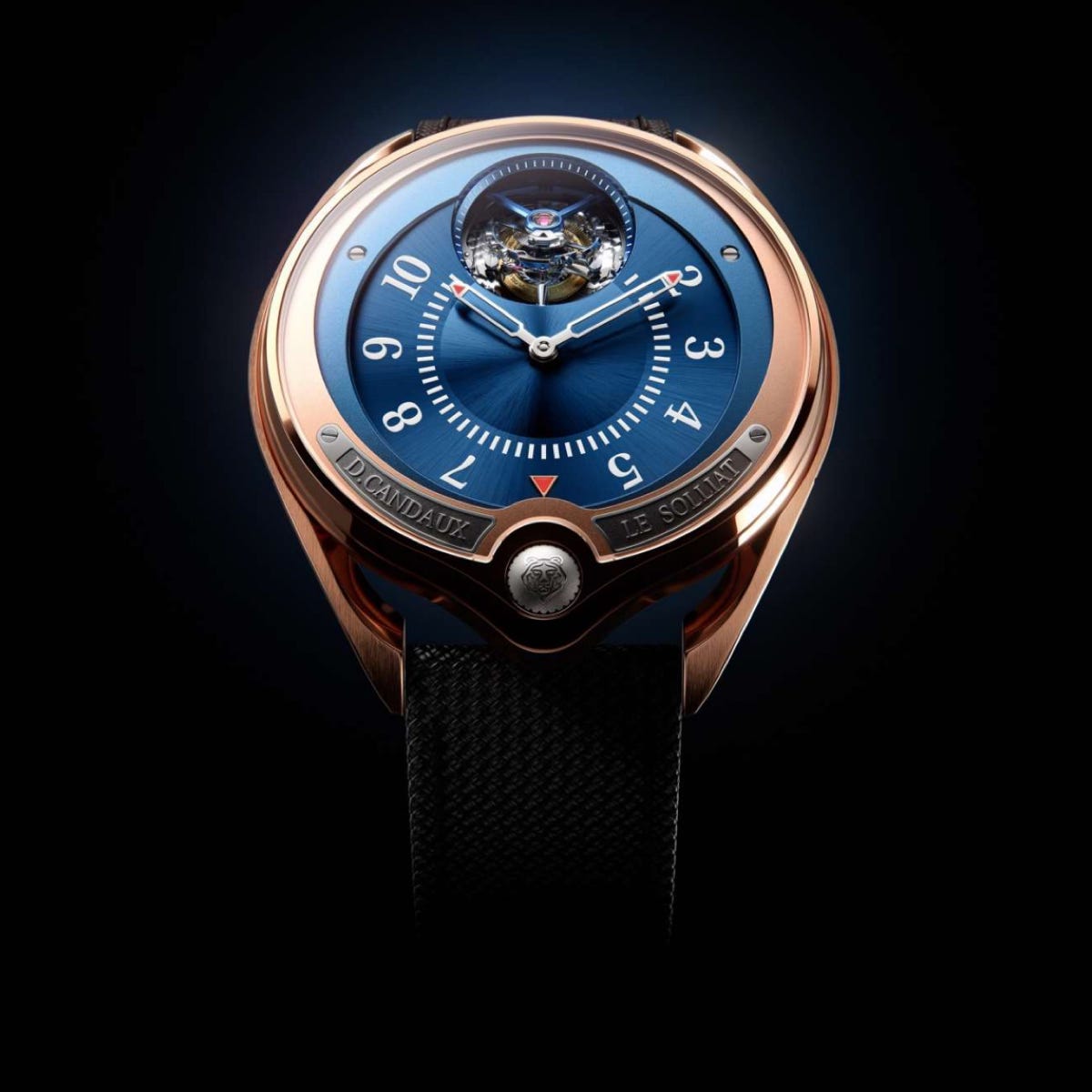 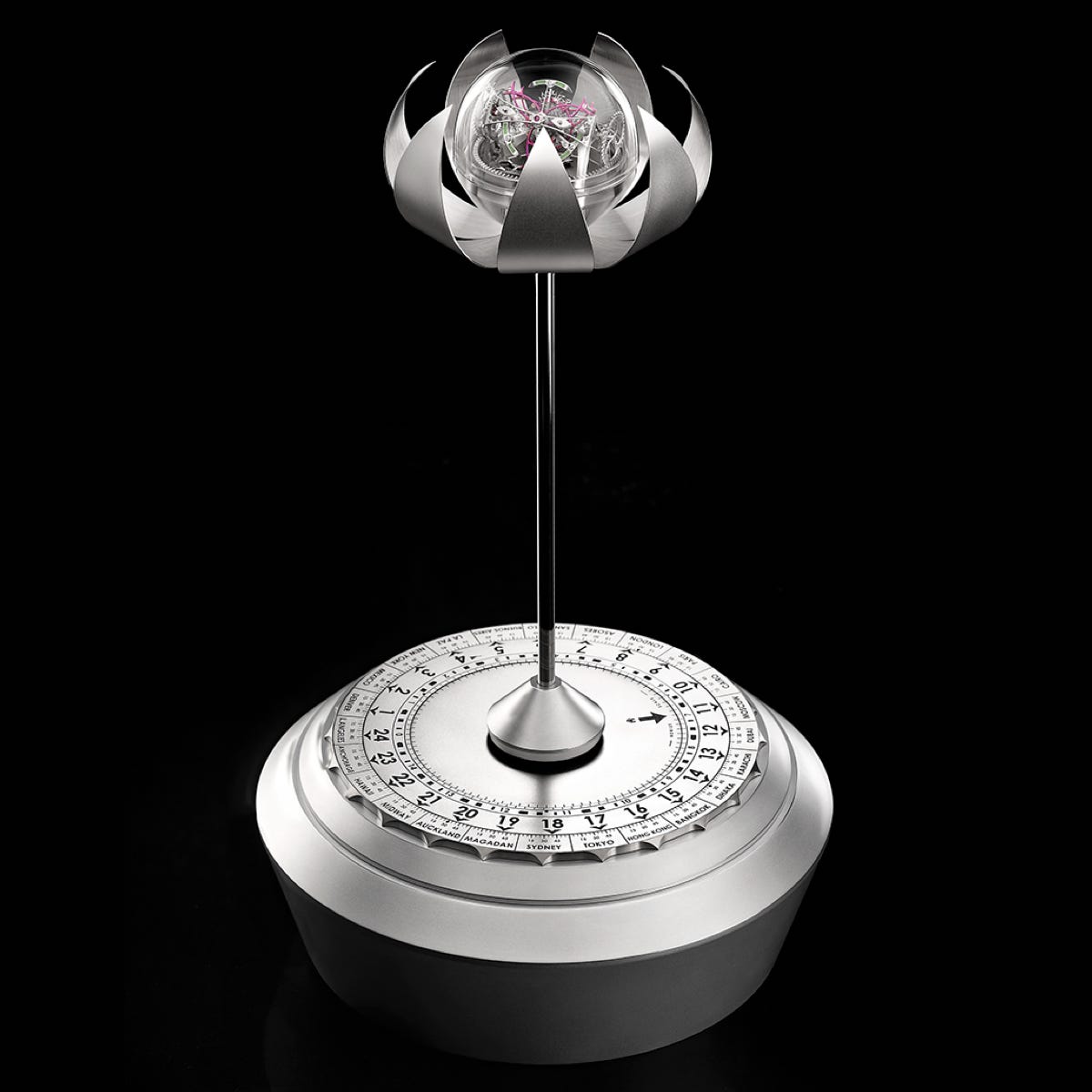