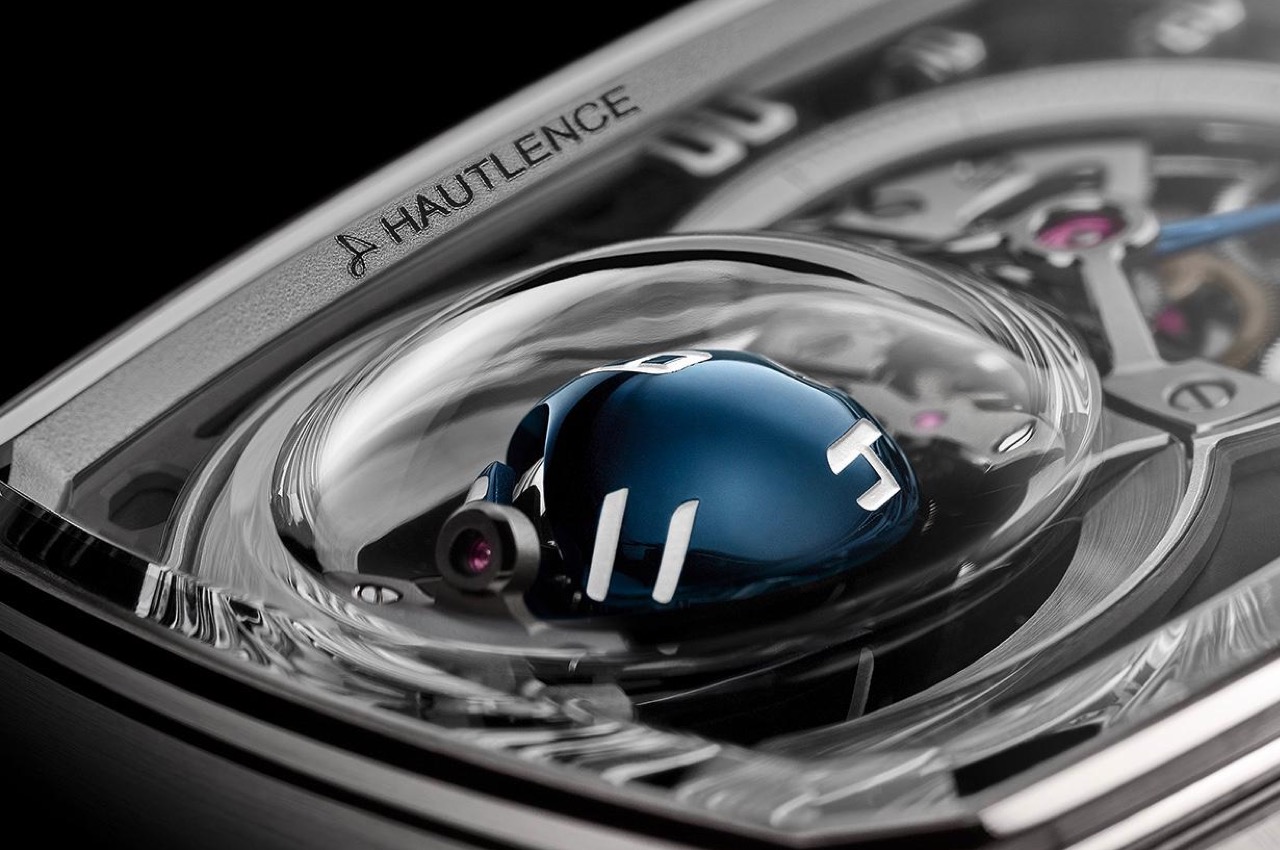 The Hautlence HL Sphere is an incredible new creation with flamboyant character and immense presence, with a playful piéce de résistance

which defies the eye from one of contemporary independent watchmaking’s most progressive young companies.

A brand renowned for its adventurous conceptual horology, Hautlence is the extrovert sibling to the svelte style of H. Moser & Cie.. Cool and cutting edge, it’s a sibling which excels at discovering new ways of delivering the message of time, with bewildering technical innovation and eye-catching animation.

The brand new HL Sphere takes the jumping hours complication and turns it into a new three-dimensional spectacle with its unique multi-axis spinning ball which explodes into a flurry of motion for one second every hour.

Presented in a rectangular case of 18Kt white gold, the display area of the HL Sphere is a screen like, with a smoked sapphire dial which permits a sight of the mechanism within, and affords equal space to the hours and minutes functions which perform in their own separate and dramatic ways.

The minutes are displayed in a retrograde arrangement, with applied numerals and a silvered index ring collaring the open cutaway, revealing the wheels and gears which form part of the magic, as when on the last stroke of the fifty-ninth minute the tension accumulated over the preceding hour is released and the entire mechanism springs into life, as blue minutes pointer instantly flicks back to begin again.

This explosion of activity also triggers the dazzling blur of the floating gleaming blue titanium sphere with its haphazard numerals as it bursts into a flashing, seemingly random spin, only for the new hour to be instantly locked into position as if by some kind of sleight of hand which will leave the unaware onlooker asking “what just happened there?”

Behind the irresistible novelty, the watchmaking is breathtaking in its complexity. For the two entwined halves of the sphere to rotate and interchange with each other, seemingly suspended under the off-center dome on the sapphire crystal, the tiny mechanism is configured around three axes which create the twisting effect of the blue orb in a charge of kinetic energy.

Fully designed and manufactured in-house, the elaborate HTL 501-01 hand winding movement is further displayed through the sapphire case-back, where a skeletonised bridge exposes the balance and open barrel which boasts three days of reserve.

It might only tell the horologic basics of the hours and minutes, but the Hautlence HL Sphere does it like no other watch. A conversation stopping crowd-puller in any room it’s a piece which fascinates and engages endlessly. It is presented on a blue alligator strap with a folding titanium buckle.