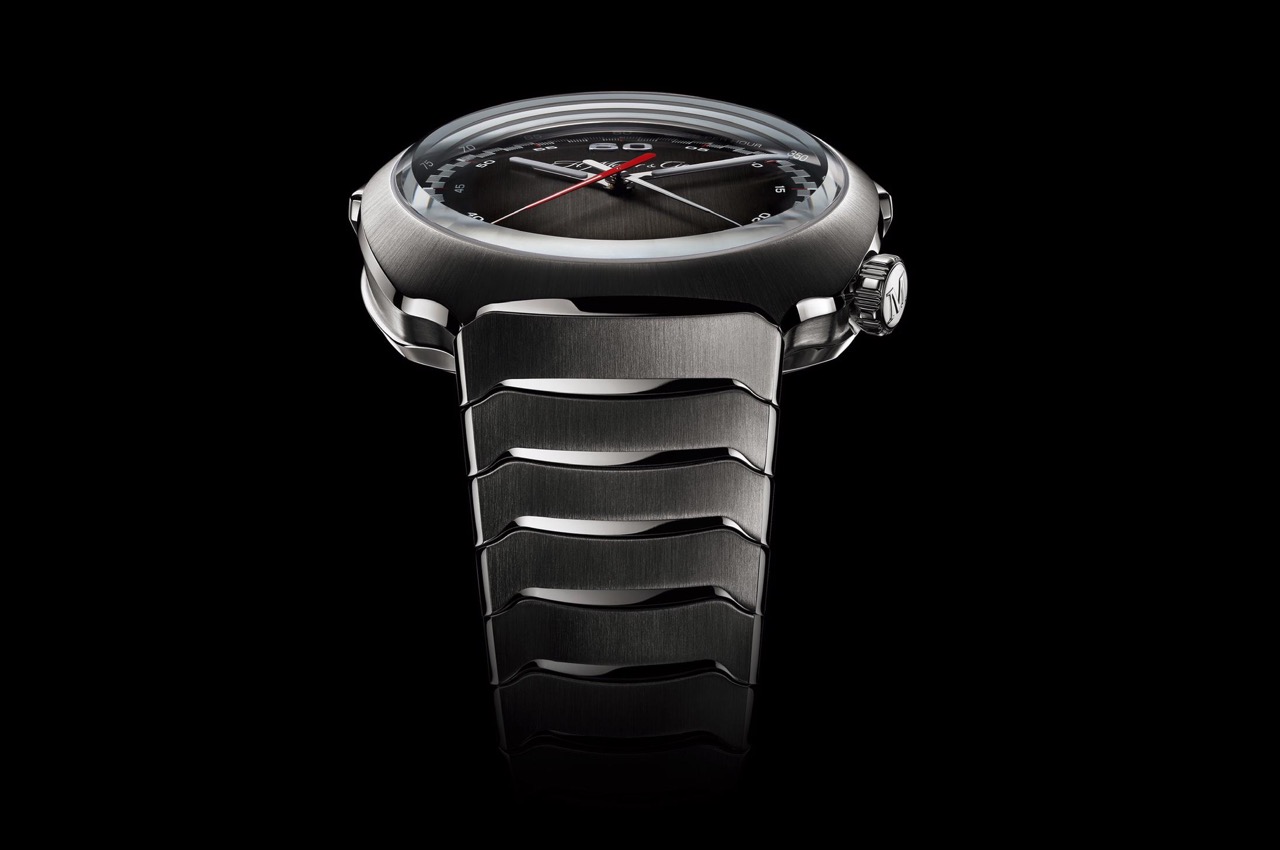 Never a marque to follow the lead of others, in its own unique and inimitable style H. Moser & Cie has just unveiled a 100-piece limited edition which heralds a brand new collection. The Streamliner Flyback Chronograph Automatic is a remarkable, stand-out contender in the increasingly crowded all-steel men’s luxury sports watch sector.

An entirely new design and concept from the ground-up, and quite unlike anything else in the brand’s portfolio, nor indeed any other, each and every component is bespoke to this piece, yet Streamliner is still immediately distinguishable as a H. Moser, with its indelible DNA of cool, suave sophistication and cutting edge contemporary haute horlogerie, which over the past decade and a half has defined the company’s design and technological ethos.

Encased in a cushion shaped case measuring 42.3mm across and 14.2mm tall the frontal profile of the Streamliner is rounded with contoured lines, which extend across the watch in a fluid and harmonious integration. Either side of the case, at the ten and the two, the pushers which activate/ stop and reset the chronograph function are engineered for use underwater, as the watch has a 120m water resistance , and their positioning is a natural reach for the thumb and forefinger, while the screw-in crown is located at the four.

A gently domed sapphire crystal rises above a fumé dial which graduates from black around its perimeter to light grey at the centre, with a prominent ‘60’ applied at the twelve o’clock position and markings printed in a chequer effect, with a tachymetyre scale on the steeply inclined rehaut. The hour and minute hands each have a generous strip of powerful Super-LumiNova which ensures excellent legibility in even low light conditions, and the sixty-minute chronograph pointers are defined in red for the seconds and steel for the minutes.

Equipped with a revolutionary movement which has completely metamorphosed the functional and aesthetic parameters of the chronograph complication, the self-winding Calibre HMC 902 , developed in conjunction with Agenhor, means that in dispensing with the conventional subdial configuration which has been the default arrangement for over two hundred years, instead the dial of the Streamliner has a clean and uncluttered display, with both the time in hours and minutes, and the two chronograph pointers emanating from the centre, so a fleeting glance is all it takes to check on both functions of the watch.

Inspired by the sleek, flowing lines of rail, road and aero design which in the 1920s and ‘30s promised a brave new world in terms of luxury, modernity and comfort, Streamliner’s features are individual in their own right yet meld seamlessly, from curvaceous link to link, and from bracelet to case in a fluid, continuous ergonomic sweep of sculpted steel elements, all of which are accentuated all the more by the sharp contrast between the pronounced brushed grain and highly polished finishings throughout. Five years in the making from concept to reality, the Streamliner’s design process actually began with the bracelet, and its contoured links articulate with a fluidity which has almost reptilian scale-like characteristic in how it flexes, and it hugs the wrist regardless of size.

Through the sapphire caseback the intricate architecture and hundreds of exquisite hand finished components of the extraordinary Agenhor mechanism are revealed in a vista which is breathtaking in its beauty and complexity. Of course this is not the first time it has been seen, as variations have been used recently in the GPGH award winning Fabergé Visionaire and Singer Reimagined editions, but as Moser are about as in-house as it is possible to get, this collaboration is both noteworthy and emphasises the significance of what is without question a groundbreaking development which not only advances the chronograph, but enhances its usability and effectiveness in every way.

Among the many technical highlights of the movement are a column wheel chronograph with horizontal clutch, and a friction wheel with micro teeth which ensure a smooth and instantaneous actuation, as well as a rotor which is located immediately beneath the dial, providing an unobstructed view through the caseback, and double barrels which have a reserve of 54 hours autonomy.

While in recent times there has been plenty of debate and discussion in watch groups and fora regarding the number of brands now in play with stylish, go-anywhere stainless steel sports watches with a high-end price tag, and which all feature integrated design where case and link bracelets are made for one another, there are those who would suggest that the last thing this densely populated sector needed right now is yet another example. However, with this striking new piece which introduces the Streamliner collection, the fiercely independent and obsessively Swiss Schaffhausen-based family owned H. Moser & Cie. prove that where there is innovation and something new to offer, there is always room for at least one more, and true to form it’s clear to see from first glance that this superb masterclass in clean and minimalist design is anything but a watch of averages.