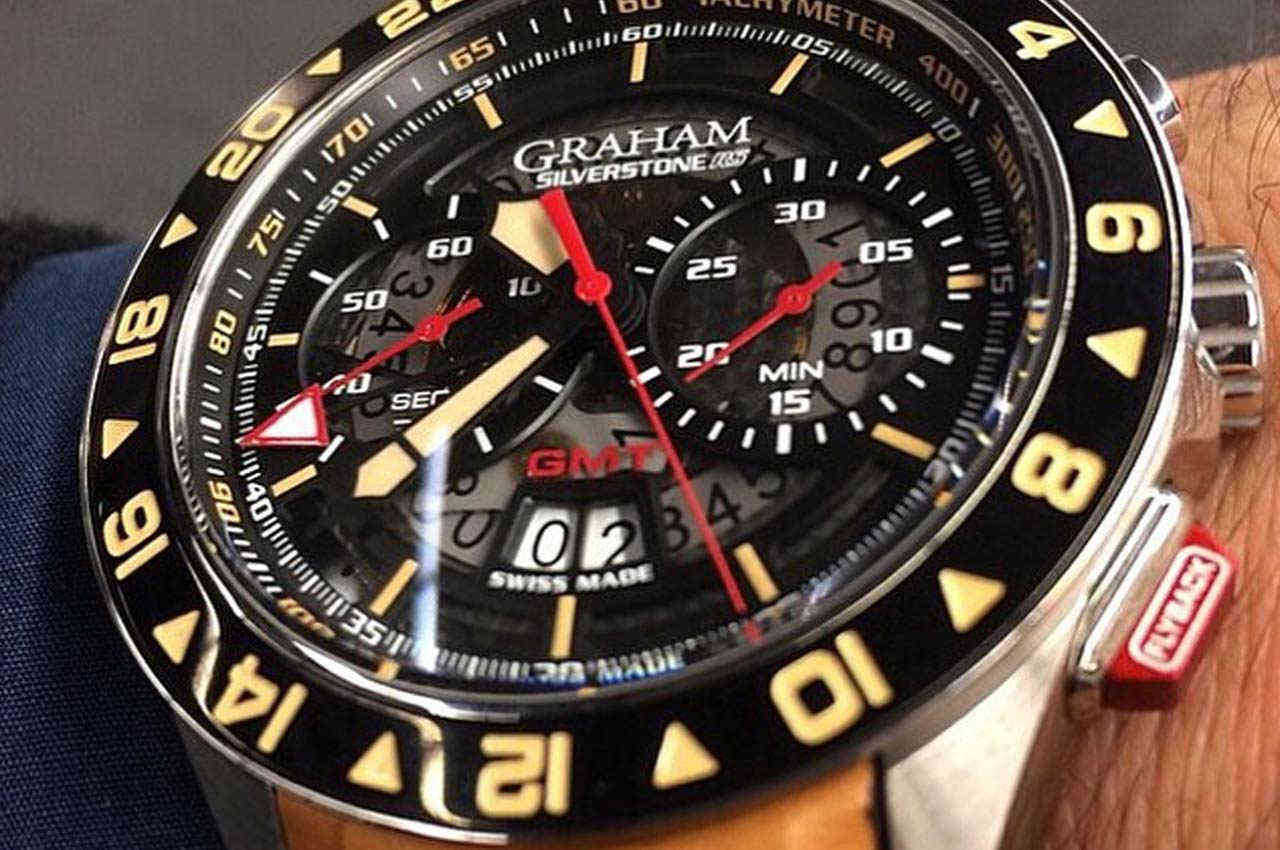 The Graham Silverstone has grown to become a cornerstone of the company since the famous English watchmaker’s name was given new life in 1998. Renowned as one of the most important and influential watchmakers in the annals of horology, George Graham’s ingenuity chartered previously unexplored waters, and among his many inventions was a mechanical clock which could be used to measure a lapsed period of time, a chronograph if you like, and so in time he became known as the Father of the Chronograph.

Although not directly associated with the famed seventeenth century watchmaker, the new owners have immortalized this reputation and so, almost without exception, every watch which bears the Graham name today, is in fact a chronograph, and the Silverstone series combines clear auto-racing design cues with modern Swiss chronograph movements, with superb production levels throughout their intricate dials and multi-part cases.

The brand new Graham Silverstone RS GMT is immediately a stunning wristwatch and with its dramatic styling it makes no attempt at understatement. Quite literally bristling with detail and colour, its 46mm stainless steel case with flashes of bright red is presented on a gorgeously comfortable light tan hand-quilted leather strap with folding clasp.

Beneath the expansive sapphire crystal the black openworked dial has been stripped to its essentials, serving to accentuate the 30-minute chrono counter at the 3 and the small seconds at the 9, as well as the hour markers which bridge across to the edge of the dial. The black hands, like the hour markers are filled with luminous sandy beige coating, in contrast to the red chronograph pointers

A smoked sapphire disc with white and red detail reveals the gear cogs and perlage decoration on the dial plate below. It also brings the date ring to life, and in particular its interaction with the little four-armed ‘windmill’ just beside the large double date window, which jumps through 90° as the date moves on from single to double figures and again into the twenties before a brief sojourn at thirty or thirty-one. It’s a fascinating curiosity and you’ll find yourself sitting in with your watch around midnight on the 9th, 19th and 29th.

The prominent red triangular GMT arrow points to the beige 24-hour scale on the black ceramic bezel. Beige is a famously challenging colour to work with to good effect, but the Graham Silverstone RS has pulled it off to a t. As well as the powerful lume properties of the hands, in daylight the off-cream colour has an almost patina-like appearance, and whether intentional or not, a hint of aged gravitas.

Partially hidden for view, a red anodized aluminium ring separates the case and the bezel, the overhanging rim of which conceals it entirely from a face-on perspective, and in a cool touch the red flyback chronograph pusher is also made in the same lightweight metal.

The stainless steel case features brushed and polished surface finishes, and the screw-in crown nestles between protective shoulders. The caseback has a large sapphire glass through which the decorated Calibre G1721 automatic self winding movement can be viewed, with its rotor spinning to the action of the wrist.

Already a popular addition to the collection and a further evolution of the model which has proven to be an important part of the brand’s portfolio, the Graham Silverstone RS GMT is limited to only 250 pieces worldwide.