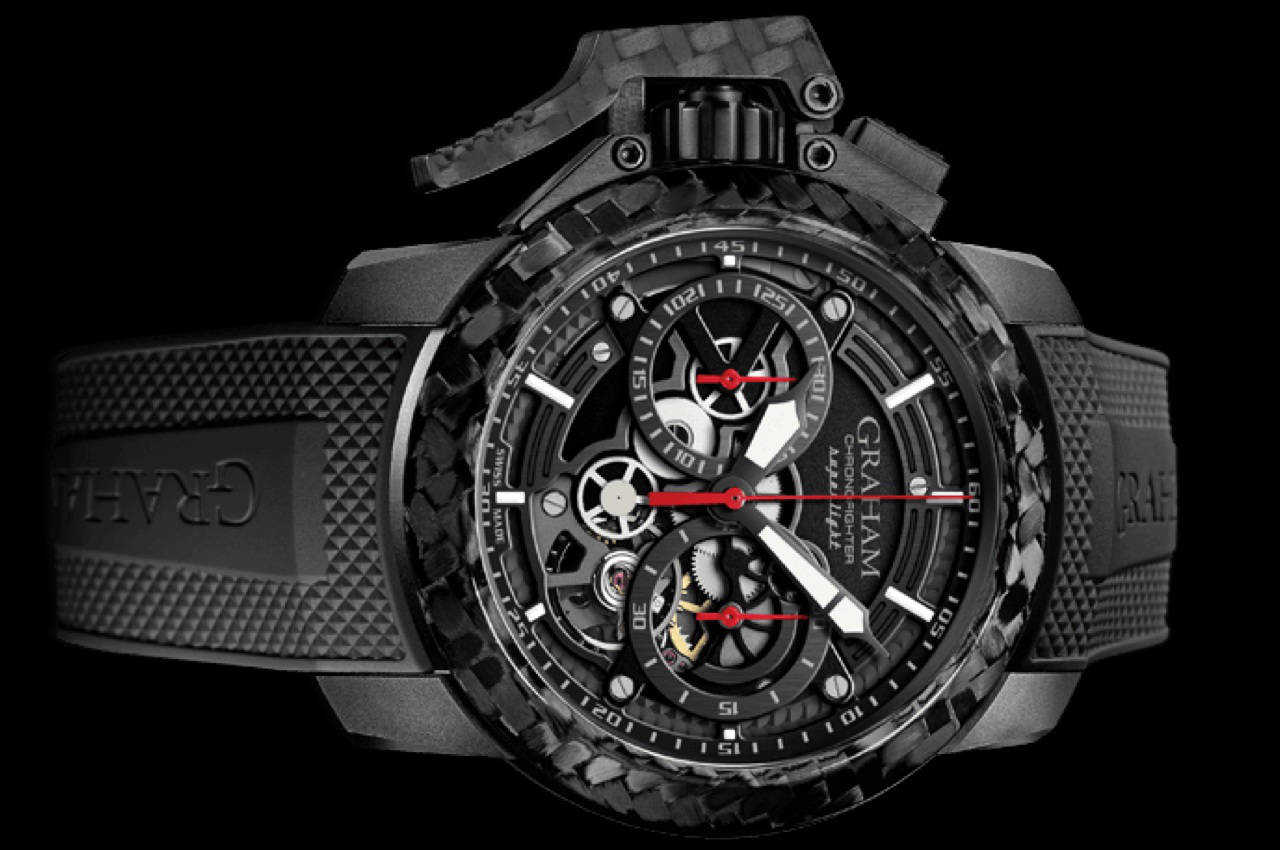 Few watches are as immediately identifiable and arresting as the Graham Chronofighter series. These are bold, uncompromising wristwatches with unique personalities and massive presence, and the brand new Chronofighter Oversize Superlight Carbon demonstrates how this eccentric collection has become an iconic design with strong signature features.

Renowned as one of the most important and influential watchmakers in the annals of horology, and apprentice to the great Thomas Tompion in the 17th Century where he was encouraged to refine his talents, George Graham’s ingenuity chartered previously unexplored waters, and among his many inventions was a mechanical clock which could be used to measure a lapsed period of time, one of the very first examples of the chronograph as we now recognise it, and in time Graham became known as the Father of the Chronograph.

Ever since the famous English watchmaker’s name was given new life in 1998 when the Company was revived, the Graham Chronofighter has remained a cornerstone model in the company’s portfolio and one which has provided the basis for many daring adaptations on its extroverted style. It is uncompromising in its size (47mm) and with its prominent chronograph trigger it flies full in the face of conventional watch design.

Although not directly associated with the famed seventeenth century watchmaker, the new owners have immortalized his reputation as father of the Chronograph, and so, almost without exception, every watch which bears the Graham name today is a chronograph, and in the Chronofighter series age-old watchmaking standards have been fused with ultra-contemporary styling and unique functionality.

The brand new Graham Chronofighter Superlight Carbon Skeleton is pretty stunning in its brooding all-carbon composite case, formed using four different production techniques from multiple layers of carbon fibre, its complex weave patterning laid bare in the finish of its bezel. The dark theme pervades across the dial too, only to be contrasted with red details, and a combination which works to amazing effect.

Of course, one of the Chronofighter’s most obvious features is its large and unusual left-hand chronograph ‘trigger’ system, which on consideration is actually a very clever solution as it means that the chronograph may be deployed or stopped using the right thumb in a natural grip position. It is this feature which has appealed to those who require precise control whilst under pressurised situations, and it is no surprise to see this model earning favour among special forces thanks to its rugged construction and durable materials.

Beneath the sapphire crystal, on the dial, the two subdials at the 3 and 6 o’clock positions display small seconds and 30-minute chronograph registers. Clearly demarcated in relief and with red indicators the chrono counters read clearly offering optimum legibility, a critical factor for use in low light environments where the Chronofighter proves its versatility as a professional instrument as much as being a high quality timepiece.

Inside beats Graham’s reliable G1747 automatic self winding movement, delivering energy at a rate of 28,800 vph (4Hz) for up to 48 hours. Visible through the transparent exhibition caseback the rotor and other components have been finished with Côtes de Genève and perlage decoration. The rear screwed-on bezel bears the Superlight motif and the series number on this very limited production.

The Chronofighter Oversize Superlight Carbon Skeleton is presented on an integrated black natural rubber strap, moulded in a tactile outer surface with clous de Paris effect and fitted with a black carbon fibre pin buckle. Despite the level of detailing and its dominating presence, the whole watch weighs in at under 100g.

With very limited production numbers pieces world wide, the Chronofighter Oversize Superlight Carbon Skeleton is already well on its way to being another sell-out model, and at The Limited Edition we are very pleased to have it in our collection of very rare and exclusive timepieces.