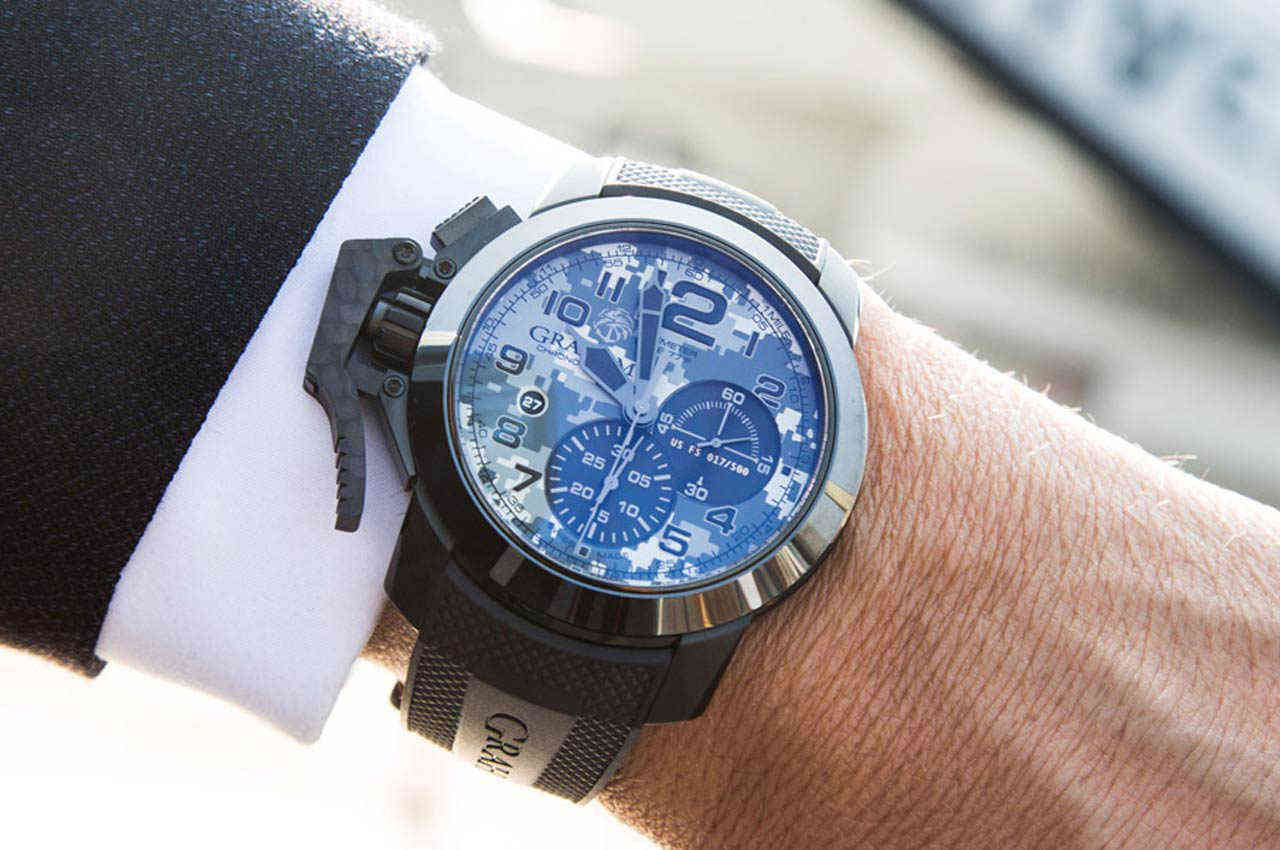 Few watches are as immediately identifiable and arresting as the Graham Chronofighter series. These are bold, uncompromising wristwatches with unique personalities and massive presence.

Ever since the famous English watchmaker’s name was given new life in 1998 the Graham Chronofighter has remained a cornerstone model in the company’s portfolio and one which has provided the basis for many daring adaptations on its extroverted style.

Renowned as one of the most important and influential watchmakers in the annals of horology, and apprentice to the great Thomas Tompion in the 17th Century where he was encouraged to refine his talents, George Graham’s ingenuity chartered previously unexplored waters, and among his many inventions was a mechanical clock which could be used to measure a lapsed period of time, the first example of the chronograph as we now recognise it, and so in time he became known as the Father of the Chronograph.

Although not directly associated with the famed seventeenth century watchmaker, the new owners have immortalized this reputation and so, almost without exception, every watch which bears the Graham name today, is in fact a chronograph, and the Chronofighter series fuses age-old watchmaking standards with contemporary styling and functionality.

The brand new Graham Chronofighter Oversize Navy SEAL Foundation has been designed to pay tribute to the US Navy’s elite Special Warfare detachment in a striking 500-piece limited edition. Encased in a reliably robust 46mm stainless steel case with black PVD coating, its impact might be somewhat subdued, but it is a very fitting acknowledgement to the members of the US Navy SEALs.

Paying homage to these secretive special forces in true covert fashion, its monochrome digitised camouflage dial bears a discreet Navy SEAL motif near the 11 o’clock position, and the small seconds subdial features the limited edition number in military style font. Subdials at the 3 and 6 display small seconds and the 30-minute chrono counter, with date near the 8, and to ensure high legibility in low light conditions the hands and numerals have been coated in a black lume.

Of course, as with all of its other siblings, the Chronofighter Oversize Navy SEAL features that unmistakable left-handed ‘trigger’ in carbon fibre, for activating the chrono start/stop pusher, which is built in to the crown. It is designed for rapid deployment and unerring accuracy every time it is needed, virtually eliminating any chance of unintentional activation which fits right in with the demands of the professional operating under pressurised circumstances.

On the underside, the sapphire crystal caseback features the flag of the United States and the Navy SEALs Foundation logo, but as it is semi opaque, the inscribed oscillating weight and the G1747 automatic movement can still be seen working away within.

The Chronofighter Oversize Navy SEAL is presented on a black natural rubber strap, moulded in a tactile outer surface and fitted with a black ceramic buckle.

With production limited to only 500 pieces world wide, the Chronofighter Oversize Navy SEAL is well on its way to being another sell-out model and at The Limited Edition we are very pleased to have it in our collection of very rare and exclusive timepieces.