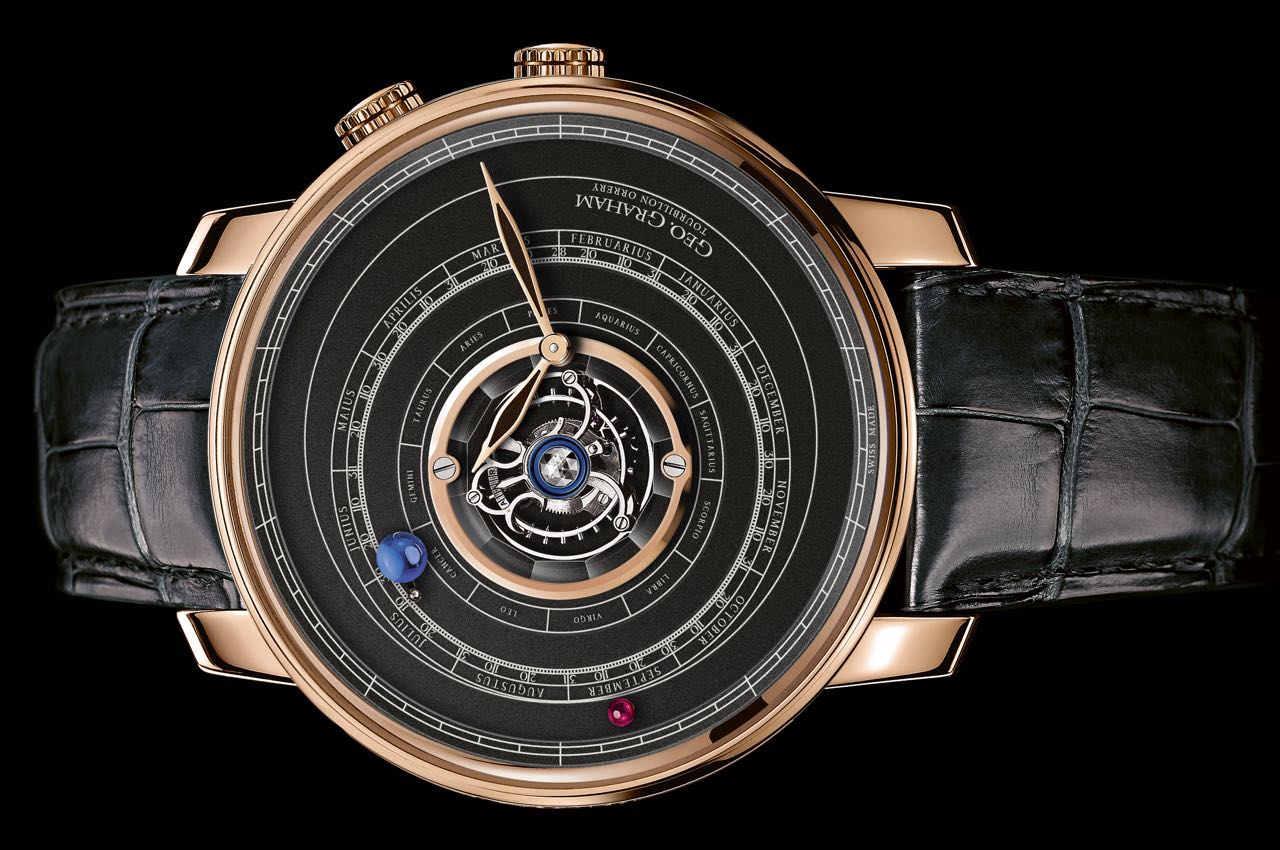 The quite superb Geo. Graham Orrery Tourbillon emphatically illustrates a very different side to the watch company better known for its eclectic Chronofighter collection. A veritable masterpiece, the Orrery Tourbillon recreates in absolute miniature a model of the Earth, the Moon and the planet Mars as they orbit the beautiful Sun feature in the centre of the dial.

The Orrery Tourbillon is encased in an impressive 18kt rose gold case, measuring some 48m across, and so it has a dramatic presence on the wrist. It is based on a mechanism which represented the pinnacle of the clockmaker’s art in the 1700s, and today these planetarium pieces are still extraordinary feats of mechanical achievement, and rarely undertaken due to their technical complexity. However, it is a fascinating and highly unusual complication, and in Christophe Claret, Graham has enlisted the services of one of haute horlogerie’s most revered innovators to create theirs.

At the focal point of the lustrous gray, lacquered dial, the tourbillon is finely showcased through a superb sapphire crystal, which sharply unveils the beauty and intricacy of the escapement tourbillon. Just offset, the hours and minutes are accented with black Super LumiNova, but it’s the little planets which really capture the attention.

Circling the outer perimeter of the dial in an elliptical orbit, a small piece of Martian meteorite represents the planet Mars, while the Earth is depicted as an orb of turquoise, with the Moon (lunar meteorite) in a constant rotation around it. As the earth and the moon pass around the dial, their position indicates both the date and the Zodiac as marked out in gold Gregorian Calendar and Zodiac segments, as well as their relative positions in the solar system. Not only does this occur in an accurate planetary cycle, but it is also true for one hundred years – and can be graduated twice to bring this up to three hundred years.

On the reverse, a sapphire case-back indicates the year, as well as the correction periods for adjusting the moon and Mars’ orbits. The crowns allow for minor adjustments of the time and planets, while further adjustments are operated via recessed corrector buttons on the case side. It’s here too that the superb workmanship executed by the hands of the Christophe Claret manufacturer can truly be appreciated, with its unusual gearing configuration complemented by the radiating Côtes de Genève ribbing spreading across the movement plates.

Presented on a hand sewn alligator leather strap, with folding clasp, this remarkable timepiece is presented as a unique piece, making it not only unusual but highly exclusive.