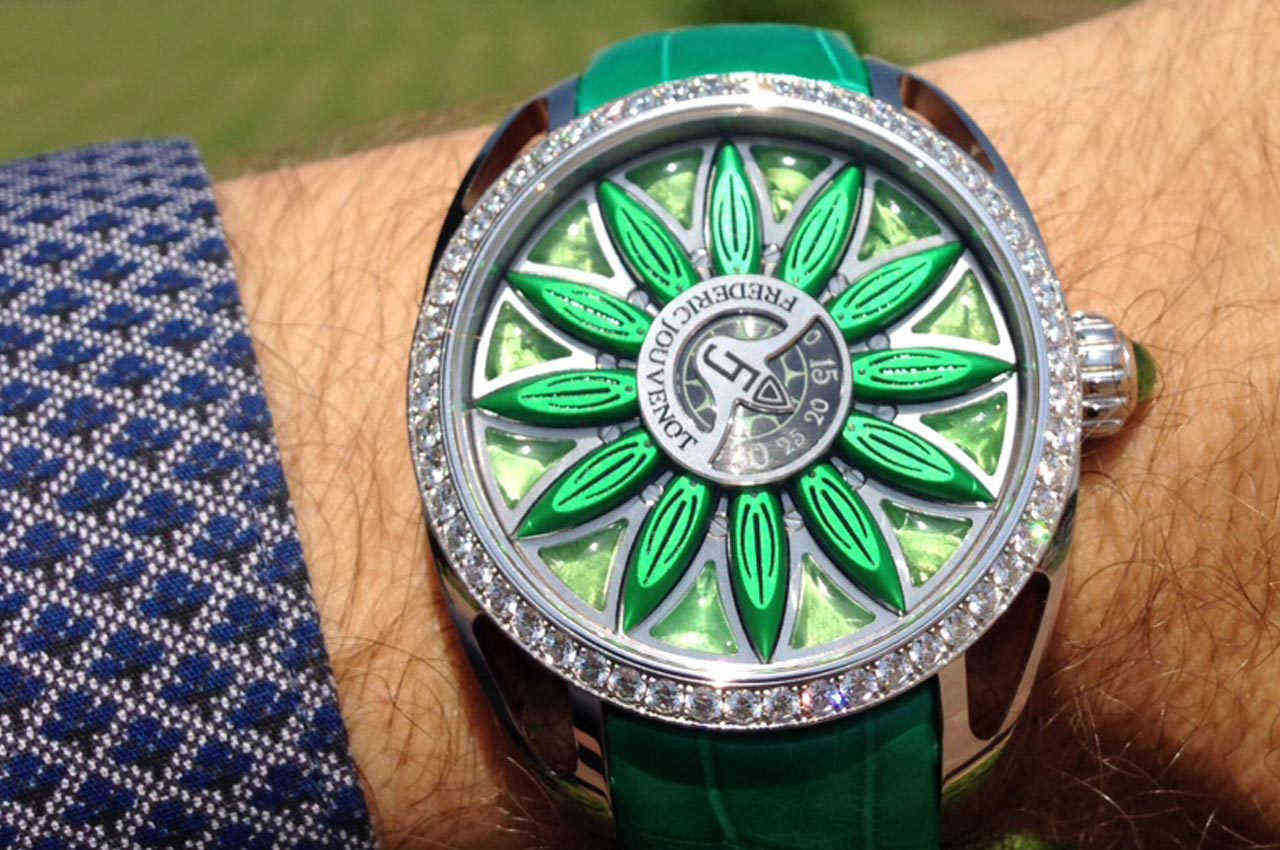 Not only is Frédéric Jouvenot a prodigiously talented young watchmaker and creator of horological fantasies, but he is also the dynamic and energetic driver behind his eponymous independent watch company whose astonishing collections have won over the hearts and minds of collectors and critics alike.

Of course all manufacturers of mechanical timepieces are inextricably bound to the centuries old invention of their forebears, but in how these old ‘blueprints’ are interpreted Frédéric Jouvenot have parted company with tradition, and so their watches which leave the atelier in la Chaux-de-Fonds really are like no others.

In theFrédéric Jouvenot Solar Deity collection each model has been inspired by ancient sun gods worshipped by different civilisations around the world, and even the display of time has taken on a different form, as the hands have been dispensed with entirely, giving rise to a family of intriguing and technically accomplished timepieces which will always beg a second look from admirers.

As a member of the Solar Deity collection, the Frédéric JouvenotSurya White Gold Green Tsavoriteis a stunning blaze of colour, movement and light: its elegant elongated form presented in 18Kt white gold, and bedecked with 54 dazzling diamonds set into the bezel.

Surya takes its name and influence from the Indian sun god and its innovative hours solution displays day and night,with vibrant green petal hour markers which denote the daytime giving way to a darkreverse with luminous detailing for the night.

Using a uniquesystem of twelve dual faced petals to represent the hours, emanating from the centre of the dial, each one transforms in its appearance by rotating through 180°in a jump at the passing of the hour. Having done away with the hour hand, the solution for the minutes is equally creative, yet also beautifully simple in its execution and functionality, as the minutes are displayed on a central rotating disc bearing the FJ motif and which aligns its arrow tip against the 60-minute display below to indicate the precise time.

Beneath the sapphire crystal the dial of Frédéric Jouvenot Surya White Gold Green Tsavoriteis positively radiant, thanks to the twelve cloves of the rare green gemstone which have been set into it. A relative of the garnet, the tsavorite is prized for its brilliance and clarity, and combined with the hour batons give the Surya a 3 dimensional sunray effect in vivid green.

Turn the watch over, observing the sapphire cabochon set into the crown, and a sapphire crystal caseback reveals the immaculate detail and hand finishing on the automatic self-winding movement within. The large black gold screw balance wheel which is the heart of the movement pulsing at 28,800 vph, the beveled edges of the plates and bridges polished to a mirror finish and the surfaces decorated with perlage and Côtes de Genève.

The Frédéric Jouvenot Surya White Gold Green Tsavorite is limited to only 88 pieces worldwide, and is presented on a choice of green, black or purple strap with 18Kt white gold folding clasp.

At The Limited Edition we totally love what Frédéric Jouvenot is doing. To us his work underlines the importance of a healthy independent watchmaking industry; employing, training, creating, inspiring, surprising and completely unchained from the constraints of designing for the masses.