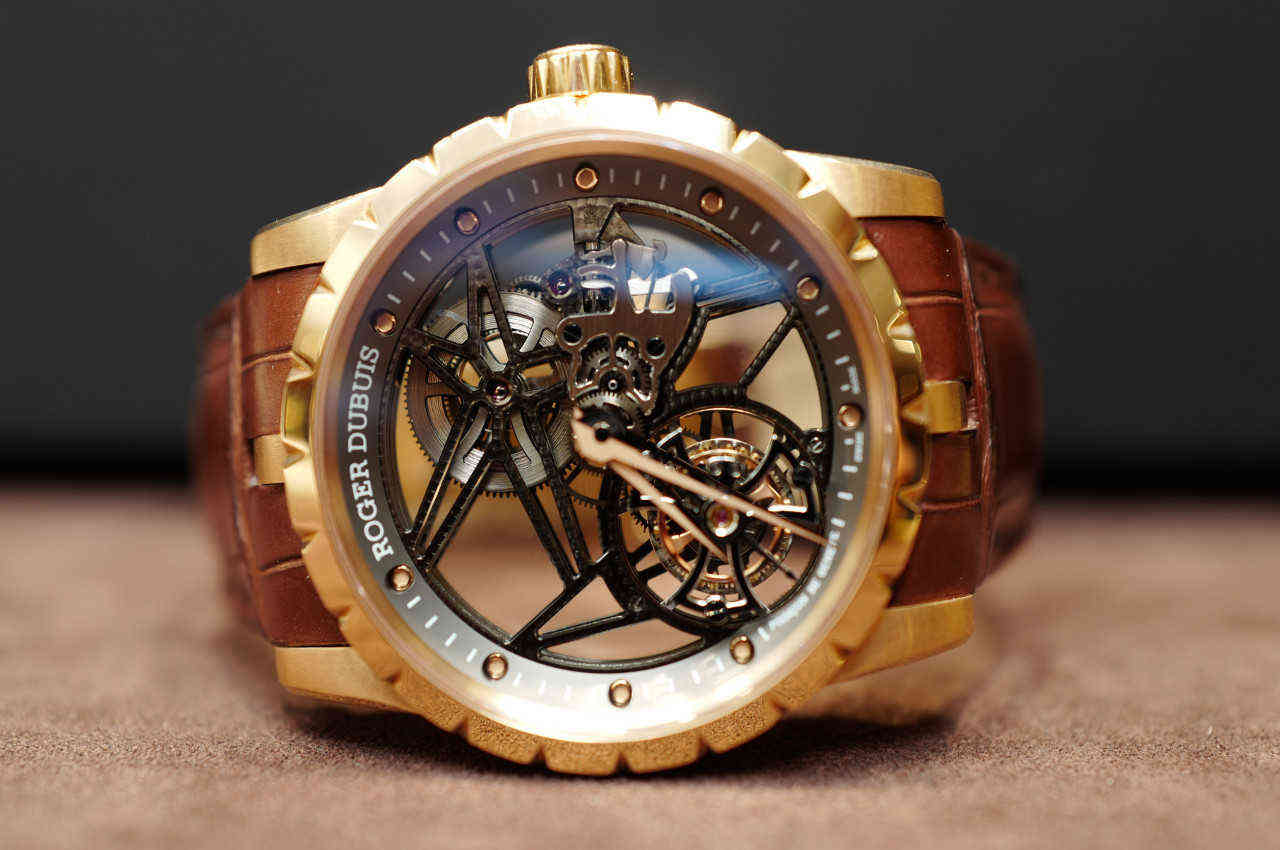 Acquired by the Richemont Group in 2008, the Roger Dubuis name has been sympathetically nurtured by its new owners and today the watches which bear his name remain true to the philosophies first established when he founded his company.

Inspired by legendary sword of King Arthur the Excalibur Skeleton Double Flying Tourbillon is a breathtaking example of the Roger Dubuis standard of watchmaking. Both technically and aesthetically it confounds even the most critical of observers with its superb levels of accomplishment and workmanship.

Presented in a 45mm rose gold case with pronounced notched detailing around the rim of the bezel it is immediately visually arresting, and beneath the sword styled hands, much more lies within to reveal why each Roger Dubuis watch boasts the little crest which declares the rarely awarded and much coveted Poinçon de Genève standard of excellence, right down to the finest detail.

The dial, such as it is, has been comprehensively deconstructed, consisting only of the charcoal flange which bears the white minute dots and countersunk gold hour indices. This of course means that the entre centre of the face is given over to the spectacle which is the feast of haute horology within.

Between the front and rear sapphires an incredible geartrain and regulating
assembly is cradled in place by the totally stripped back skeletonised frame, which affords the wearer an unimpeded three-dimensional view of the in-house manufacture Calibre RD01.

Manual winding, the mainspring in the open barrel stores a reserve of forty-eight hours, and its energy is regulated by two magnificent flying tourbillons whose spring pulsations fall into a matching rhythm thanks to the effect of resonance, resulting in optimal precision and shock resistance.

Completely exposed, the twin tourbillon cages gracefully rotate and lead the eye on towards the rest of the movement, each and every part of which has been meticulously hand decorated and reduced to its barest minimum. The movement plate is dispensed with and instead only a delicate web of black perlage secures the wheel pinions, forming a star above the centre of the barrel, and this also applies to the rear, the transparency complete.

Featuring brushed and polished surface finishing on the rose gold case, and a novel snap down crown protecting cap, it is presented on a brown alligator leather strap with rose gold folding clasp, and is supplied, brand new and unworn in full manufacturer’s packaging with full Roger Dubuis warranty.

An extraordinary feat of horology and execution, the Roger Dubuis Excalibur Skeleton Double Flying Tourbillon is a very special timepiece, and produced in only an 88 piece edition.