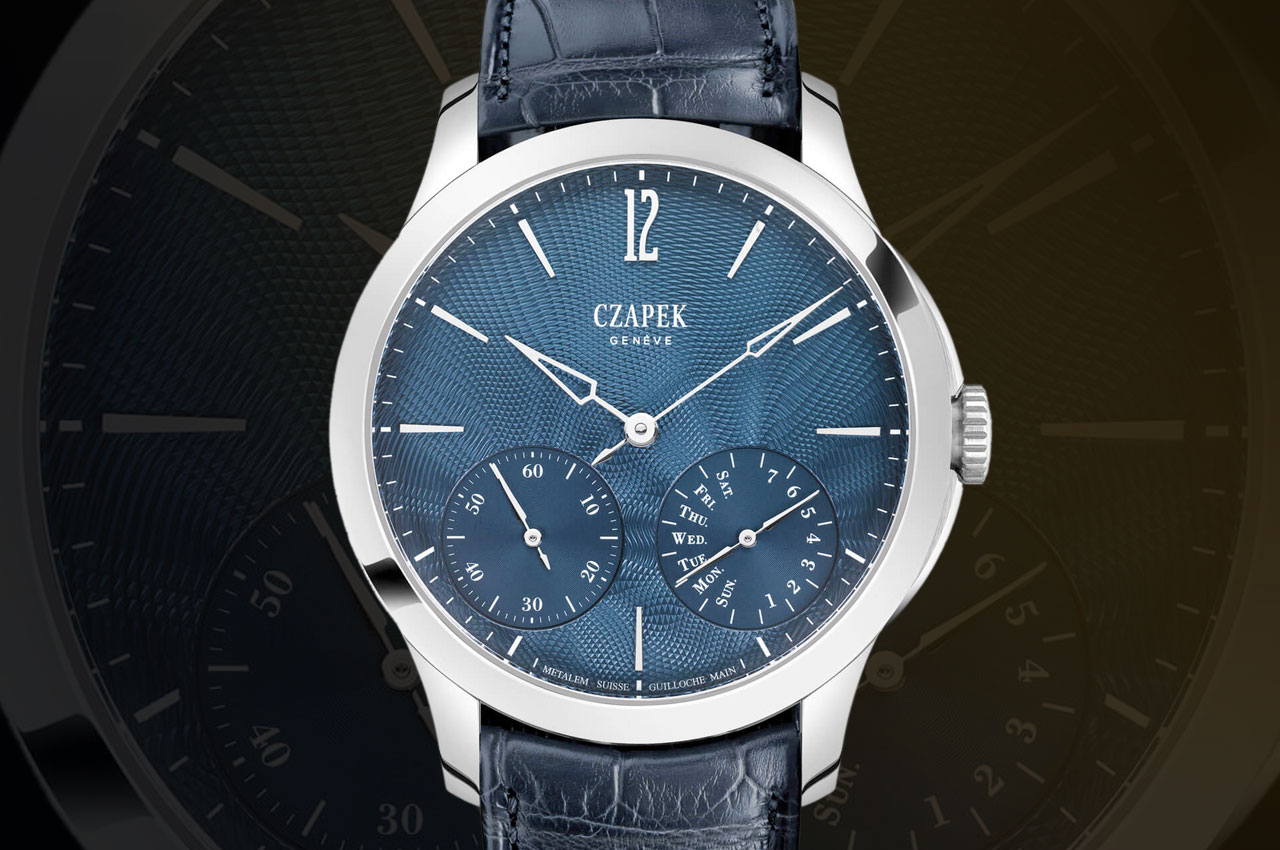 Encased in polished stainless steel and featuring a spectacular hand crafted dial, painstakingly engraved with a mesmerising guilloché decoration, the Quai des Bergues Blue Aurora by Czapek of Geneva is a stunning men’s luxury wristwatch, which is reserved, elegant and underlines the credentials of what is a young company, but a name with a quite remarkable place in the annals of watchmaking history.

Modelled on a pocketwatch masterpiece from 1850 by François Czapek, the Quai des Bergues Blue Aurora also takes its name from the address of the Geneva atelier and boutique where he had set up in business on his own, following a six year partnership with Antoine de Patek. During this time, the two young Czech masters honed their prodigious talents, side by side at the watchmaker’s bench, before separating in 1845 and embarking on careers which would immortalise Patek’s name, and bring great success to Czapek as well, although for he it would end in mysterious circumstances, when he disappeared forever at the height of his achievements in 1869, leaving behind workshops and three boutiques across Europe’s finest cities, and an important legacy which has lain dormant for a century and a half.

The Czapek name was reborn in 2015, and with a meeting of stylish contemporary design and traditional hands-on watchmaking, the Quai des Bergues Blue Aurora is a connection with that prestigious watchmaking history, and with it generously proportioned subsidiary dials, its distinctive layout revives many of the unique techniques and characteristics of his lavish eighteenth century pocket watches.

The polished stainless steel case has a round body and measures 42.5mm across, with a sculpted recess around its waist and curving lugs, while the crown and the shoulders either side of it complement the profile of the watch.

Beneath a gently domed sapphire crystal the deep blue dial is quite magnificent, its applied steel indices and hands a perfect contrast, and to captivating effect its ‘Java’ guilloché decoration creates a hypnotizingly intricate pattern of overlapping circles, which ripple and fan out from around the two recessed subdials. A technique conceived by Czapek himself, each dial is executed to perfection on a manual rose engine onto a domed bombé disc of gold, silver, palladium and platinum, and the detail is absorbing.

The small constant seconds are displayed in the recessed subdial at the seven, while adjacent at five, another Czapek novelty is the joint seven day power reserve and weekday indicator, originally devised as a convenient reminder of the weekly ritual in its time of winding one’s timepiece every Sunday evening.

It follows thus that the Quai des Bergues is powered by a hand winding movement with a seven day reserve, and from the underside, a sapphire glass exposes the proprietary Calibre SXH1, with its two skeletonised barrel ratchets, sandblasted bridges and cock revealing the balance and escapement. Designed and developed in collaboration with local Swiss Haute Horlogerie specialists Chronode, the movement is bespoke, and in its every detail, the bevelling and anglage is indicative of their uncompromising standards.

A superb watch which is individual and sophisticated, the Czapek Quai des Bergues Blue Aurora is exclusive too, with only ten numbered pieces of this edition being produced.