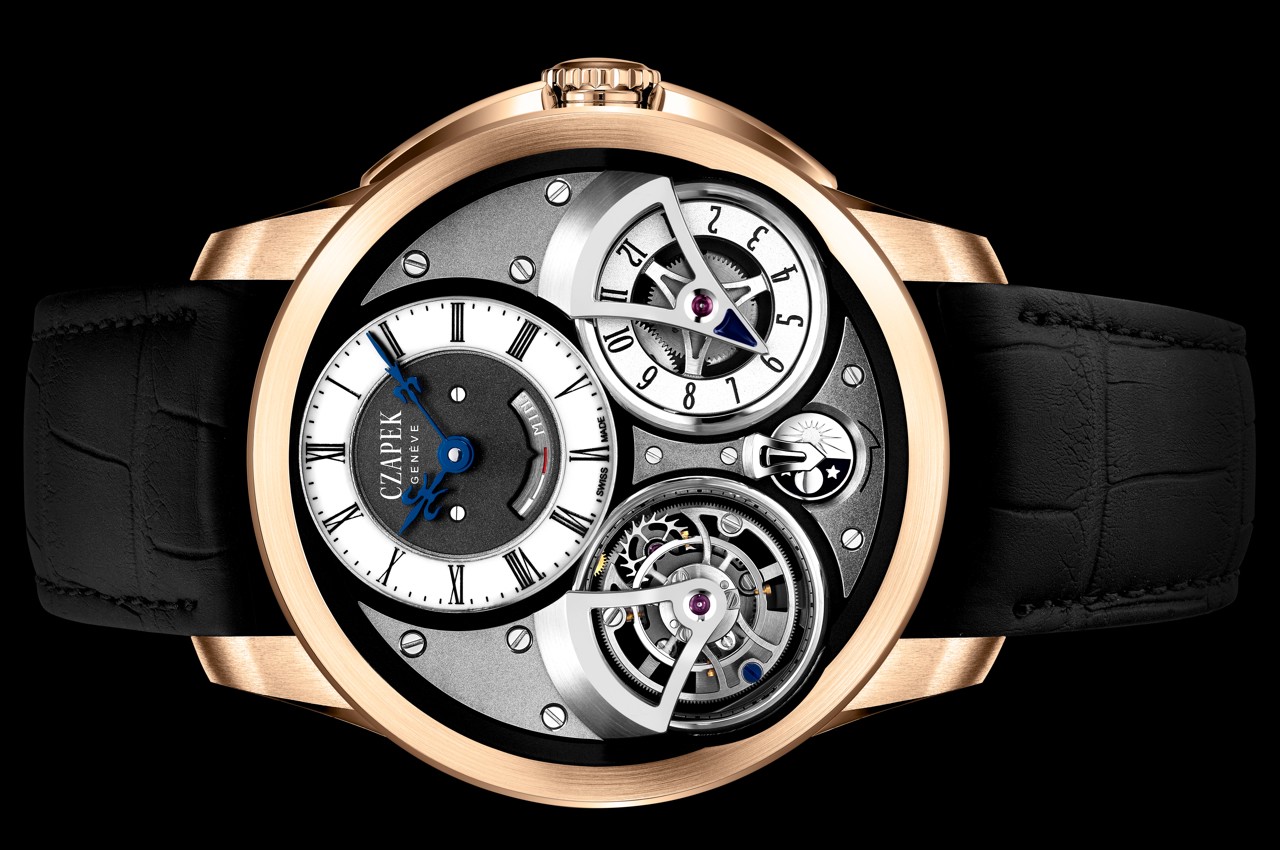 When you look at the Place Vendôme Tourbillon Suspendu ‘Ici et Ailleurs’ it’s worth remembering that only a few years ago, the name of Czapek was pretty much unheard of in all but the most academic watch connoisseur circles. A quite spectacular wristwatch it is technically sophisticated and beautifully executed, and it confidently reinforces the standing of this newly revived, historically significant Swiss marque among the echelons of high-end watchmaking.

Established in 2015, Czapek celebrates the life and work of an 18th century watchmaker whose clients were the nobility and society’s elite, and who as a young man created pocket watches with his partner Antoni Patek, whose own name would become immortalized in the history of horology. Inspired by this important legacy the new Czapek combines the art of traditional hands-on watchmaking and classical complications with subtle nuances of contemporary influences.

In its case of satin brushed 5N rose gold the Place Vendôme Tourbillon Suspendu ‘Ici et Ailleurs’ is a piece for the most discerning collector. Featuring Métier des Arts acanthus leaf hand engraving on its side and on the shoulders which protect the crown, the detailing is superb and fitting for a display which is brought to life by the captivating animation of a horologic whirlwind it is distinguished, complex and highly individual.

Beneath the gently domed sapphire crystal, a base of mottled anthracite with polished screw heads provides the backdrop for the dial, a rotating second-time zone disc and the constant graceful motion of the suspended tourbillon. Most prominent is the elevated ring of gleaming white grand feu enamel with long and slender roman numerals to which two little blued gold hands with intricate Fleur de Lys point to show the hours and minutes. At its centre, a curved window displays how much of the power reserve remains.

A solitary blue screw counts off the seconds as the tourbillon rotates, suspended beneath a rounded bridge, while just across the bridge of the second time zone disc comes to a tip to indicate the hour. Nestling in between, a small disc indicates day or night in the second zone.

Turned over, and a sapphire crystal reveals a big ratchet wheel on a numbered back plate of grey anthracite with highly polished anglage edges, which partially expose the gear train and the unsupported underside of the tourbillon. The proprietary movement is crafted by complications specialist Chronode, and beats at 21’600 vph with a power reserve of some sixty hours.