From a brand name which had all but been lost in the mists of time until its revival in 2012 and subsequent reappearance in 2015, the Czapek Faubourg de Cracovie Tao Edition is a quite superb wristwatch in which classical overtones are combined with the day to day practicality of the chronograph, and executed in a stylish and sophisticated presentation.

The Czapek heritage truly is a noble one, and traces back to the eighteenth century when, among other notable achievements, a talented young Polish watchmaker called François Czapek joined forces in 1839 with another fellow countryman, Antoine Norbert de Patek, in Switzerland, and two extraordinary careers began.

Czapek’s association with Patek would last for six years, until 1846, when each went on their own separate paths, and setting up their own companies, but between the two masters a standard of excellence which endures to this day had been set, and as watchmaker to society’s elite, Czapek was acknowledged as one of the greatest watchmakers of his time.

In keeping with such a legacy, the Czapek company of today is one which creates exquisite haute horlogerie for the discerning collector, and reflecting this rich history, its collections are named after the locations of the boutiques where its founder once offered his magnificent timepieces across Europe.

Following on the success of its award winning debut Quai des Bergues and the superb Place de Vendôme Tourbillon collections, the third Czapek takes on the most popular of contemporary complications, the chronograph, in the Faubourg de Cracovie.

Combining the practical functionality of the chronograph with classical hand produced haute horlogerie and the glossy lustre of a grand feu enamel dial, the Czapek Faubourg de Cracovie Tao limited edition is a stunning and highly exclusive contemporary men’s luxury wristwatch, balancing sophistication and style in its 41.5mm round stainless steel case.

Under a sapphire glass, the dial features slender roman numerals printed onto the enamel surface, above which ornate rhodium plated hands indicate the hours and minutes. The constant seconds are displayed at the six, where the date window is discreetly integrated too. The thirty minute and twelve hour chronograph counters are welded from beneath and coated in black enamel, and are activated by the case hugging pushers either side of the crown at the three o’clock position.

The Faubourg de Cracovie is powered by a proprietary self winding movement which has been designed by specialist Vaucher Manufacture Fleurier and is certified to C.O.S.C. official chronometer standards. A sapphire caseback reveals the gold oscillating weight and the openworked architecture of the anthracite plate, beneath which can be seen the pulsing balance and where the column wheel, vertical clutch and linear hammer chronograph mechanism are integral to the calibre. Fully wound, its single barrel is good for some sixty-five hours of reserve, and it beats at 36’600 vph.

A beautiful and rare piece with craftsmanship of the highest order throughout, the Czapek Faubourg de Cracovie Tao Edition chronograph is presented on alligator leather strap with folding clasp. May 29, 2020
VIANNEY HALTER ANTIQUA PERPETUAL CALENDAR
Even among the often astonishing conceptual horology to be discovered in the world of independent watchmaking, Vianney Halter stands out on his own. Unconventional, uncompromising and unconcerned with
READ MORE May 29, 2020
Grand Voyageur by Vianney Halter
If you’re already familiar with the work of Vianney Halter, then you’ll know that a watch with his name on it is never ever going to be considered as conventional, and so while the Grand Voyageur
READ MORE 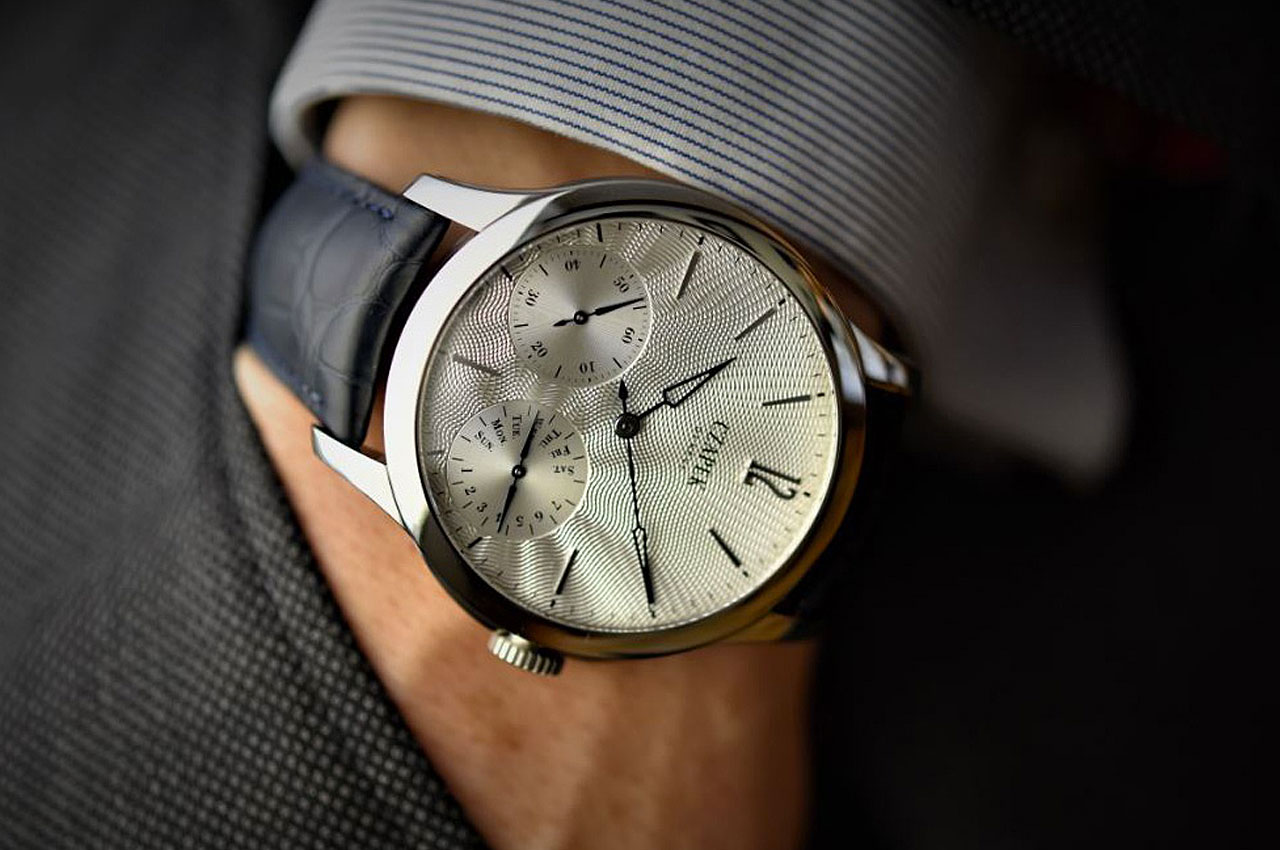