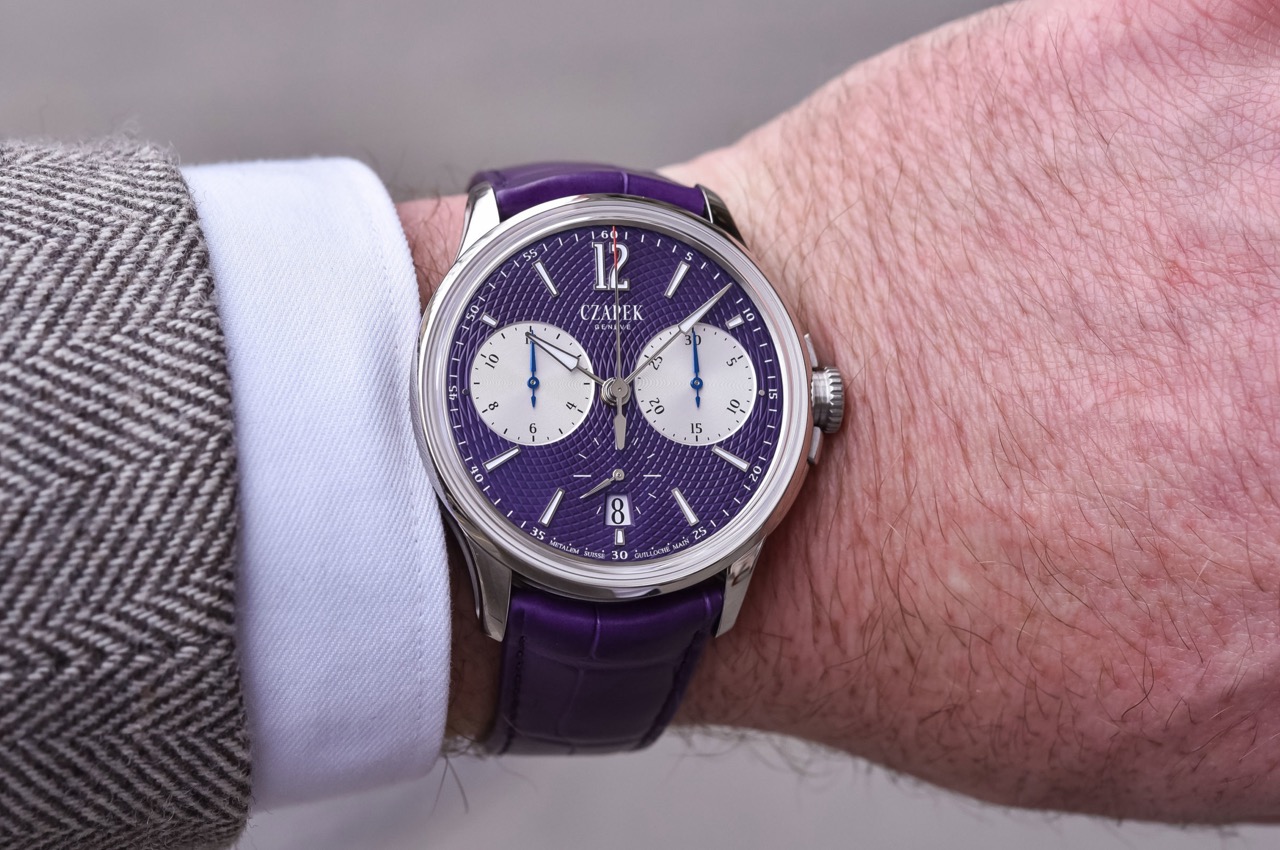 A significant historical Swiss watch brand, the prestigious name Czapek Genève was engendered through a six year partnership between Czech watchmaker François Czapek and Antoine Norbert de Patek between 1839 and 1846, when the two fellow countrymen, newly arrived in Switzerland, set up a company to create finely crafted masterpieces for the courts and palaces of Europe’s premier citizens. Re-awakened and re-launched onto the watchmaking landscape in 2015, Czapek continue to preserve the legacy of its illustrious past with a portfolio of classically inspired but contemporary watches, each manufactured to exacting Haute Horlogerie standards. The Faubourg de Cracovie Purple Panda model is an evolution of the company’s acclaimed chronograph series, and is a strictly limited release of 18 pieces.

The model carries a round 41.5mm case of stainless steel. Exhibiting an elegant presence on the wrist, it  features discreet case hugging chrono pushers, and is perfectly proportioned throughout. Beneath the gently domed sapphire crystal a stunning métiers d’art dial is revealed.

Meticulously engraved by hand operated lathe, with rings of circles emanating from the two recessed chronograph counters at the three and nine, the dial surface features the deeply cut ‘Resonance’ guilloché decoration. Rendered in a lively shade of purple it is immediately compelling. Adhering to styling codes from their rich legacy, the technique used to create this alluring surface dates back to the mid eighteenth century when François Czapek used the very same method on his magnificent pocket watches.

In contrast, the applied luminous filled baton indices and the number ‘12’ are more of our time, and together with the elegant arrow head hands which are also luminous coated they provide excellent low light legibility.

A twelve hour chronograph is operated via the flat pushers which are integrated into the profile of the crown protection, with a central seconds and thirty minute and twelve hour counters at the three and nine. The small constant seconds are at the six, where a window also displays the date.

The Faubourg de Cracovie Purple Panda chronograph is powered by the Czapek SXH3 proprietary self winding movement which has been designed by specialist Vaucher Manufacture Fleurier. A sapphire caseback reveals the gold oscillating weight and the openworked architecture of the anthracite plate, beneath which can be seen the pulsing balance and where the column wheel, vertical clutch and linear hammer chronograph mechanism are integral to the calibre. Fully wound, its single barrel is good for some sixty-five hours of reserve, and it beats at 36’600 vph.

A handsome timepiece which demonstrates the Czapek’s commitment to craftsmanship of the highest order throughout, the Czapek Faubourg de Cracovie Purple Panda chronograph is presented on black alligator leather strap with folding clasp.