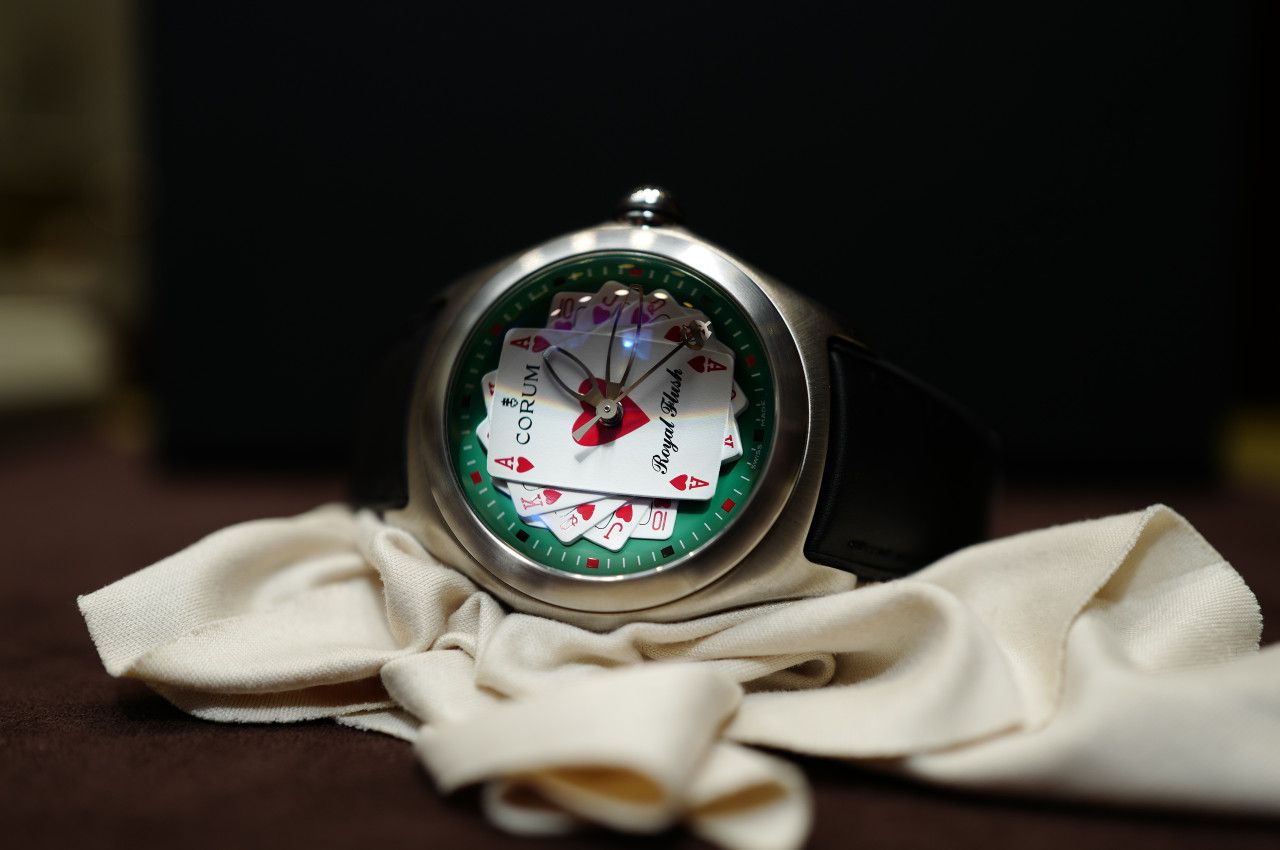 Corum’s iconic Bubble watch is back! A brand which has always been avant-garde in their outlook to their watchmaking, imaginative and uncompromising design has been part of their ethos since the company was founded in 1955.  For their new series of Bubble watches, Corum have once again allowed their design department to unleash their creativity to its fullest, resulting in a collection which has an unprecedented artistic appeal, and which first time around left a lasting impression.

The Corum Bubble watch is characterised by the massive sapphire crystal which rises up 8 mm high.  Styled to recall high-domed dive watches from the 1960’s, this prominent feature has given the collection instantly recognisable aesthetics and has earned it iconic status within the watch industry and bestowed upon it an outgoing, fun personality.

Such flamboyant design lends itself extremely well to artistic and playful dial design, such as the cool example found on this limited edition Royal Flush model.

For poker-faced gamblers everywhere, a royal flush is a momentous event and, once viewed, the Corum Bubble Royal Flush edition is an indispensable essential for the high rolling player.

Arranged to display the full hand of the royal flush of hearts the appearance of the fortuitous poker hand is laid out on a background of baize-green with the Ace card topmost.

At the dial edge, alternating black and red minute markers and a white minute track serve to indicate time.  The hour and minute hands have been skeletonised so nothing interrupts the unique panorama of the lucky cards.  As a quirky reminder of the rewards of winning, the seconds hand is tipped with a lucky dollar sign.

The domed crystal acts just like a lens, magnifying and emphasising every nuance of the superb artwork.  When viewed from an angle, it adds distortion, and the features take on an entirely different 3D characteristic.  The effect is quite simply amazing.

In harmony with the pronounced curve of the sapphire, the case has a rounded profile, with large rounded crown and brushed and polished surfaces. Clever lug design and a brown leather/rubber sandwich strap ensures that it will fit snugly and wear easily on the wrist.

The compelling spectacle of its original artisan dial, together with the rarity of its strictly limited production number makes this Corum Heritage Bubble Royal Flush model a highly desirable proposition not just for the “players”, but also for collectors of fine watches who appreciate uniqueness and exclusivity.