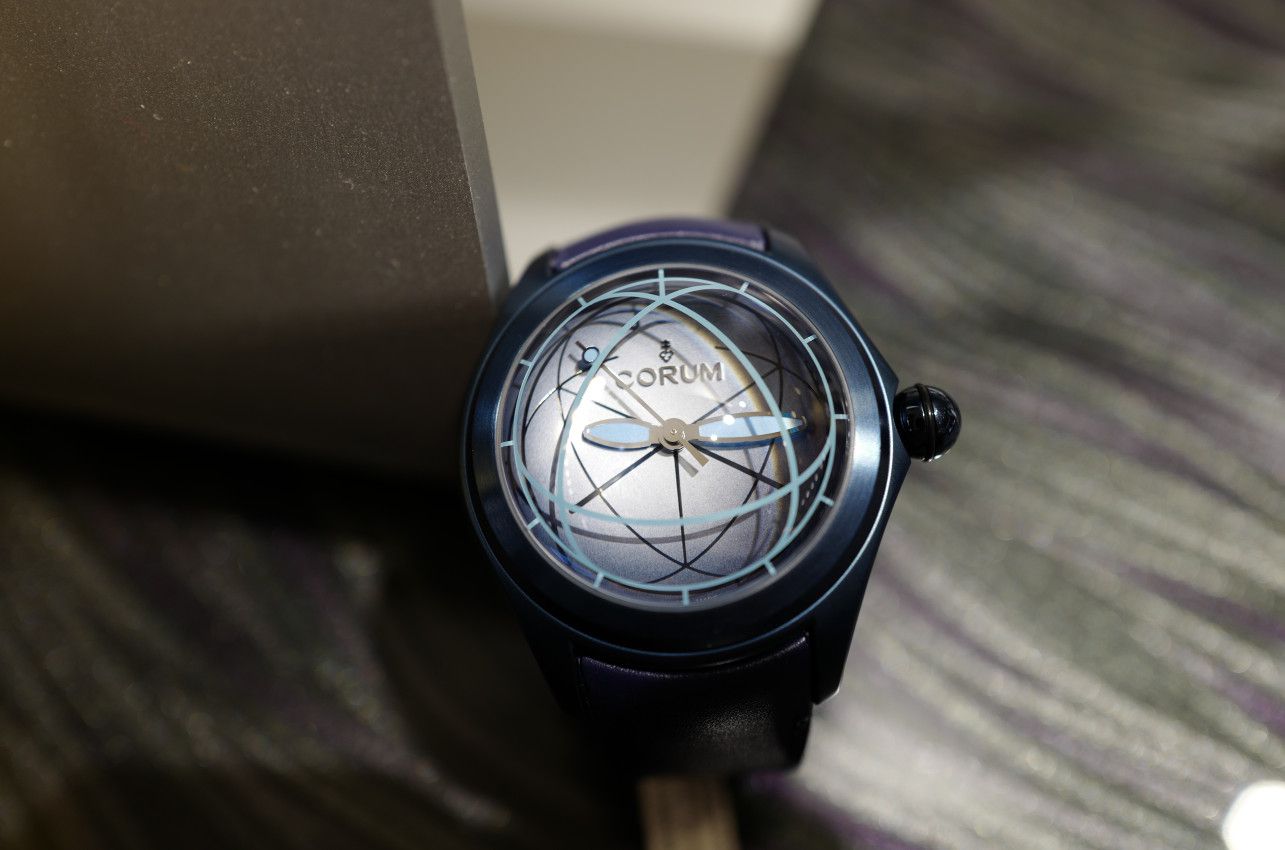 Corum’s iconic Bubble watch is back! A brand which has always been avant-garde in their outlook to their watchmaking, imaginative and uncompromising design has been part of the Corum ethos since the company was founded in 1955.  For their series of Bubble watches, Corum have allowed their design department to unleash their creativity to its fullest, resulting in a collection which has an unprecedented artistic appeal, and which first time around left a lasting impression.

The Corum Bubble watch is characterised by the massive sapphire crystal which rises up 8 mm high.  Styled to recall high-domed dive watches from the 1960’s, this phenomenal feature has given the collection instantly recognisable aesthetics and has earned it iconic status within the watch industry and bestowed upon it an outgoing, fun personality.

The exclusive limited edition all-blue Bubble Sphere2, part of the Op Art series, is the result of an exciting collaboration between Corum and industrial designer, Nicolas Le Moigne.  Together they have created a highly original dial which is showcased perfectly beneath the pronounced dome.

From every angle the Bubble Sphere2 is a spectacular piece. At 47mm its round case with flowing contours is certainly large, but isn’t that the Bubble’s charm – everything is oversized!  Abstract lines traverse the blue dial, representing abstract art from the 1960’s.  On the underside of the crystal, the artwork continues as the lines crisscross beneath the sapphire.

Face-on it is striking.  When viewed from the side, the magic happens as the crystal acts like a lens, magnifying and distorting the features of the dial giving an entirely different perspective.

Corum have chosen to emphasise the modernistic styling of the Bubble Sphere2 with glassy blue tones which give both the dial, and the blue PVD treated case with its contrasting brushed and polished finishing, a vibrant appearance.

In harmony with the seductive curve of the sapphire, the 47mm case has a rotunde profile and, clever lug design ensures that it will fit snugly and wear easily on the wrist.

Turn the piece over, and the fine perlage finishing of the mechanical Swiss CO 082 automatic self winding movement is revealed through the exhibition case back.

The combination of artistic aesthetics together with mechanical sophistication makes this Corum Bubble Sphere2 Stainless Steel/Blue PVD an enticing proposition.