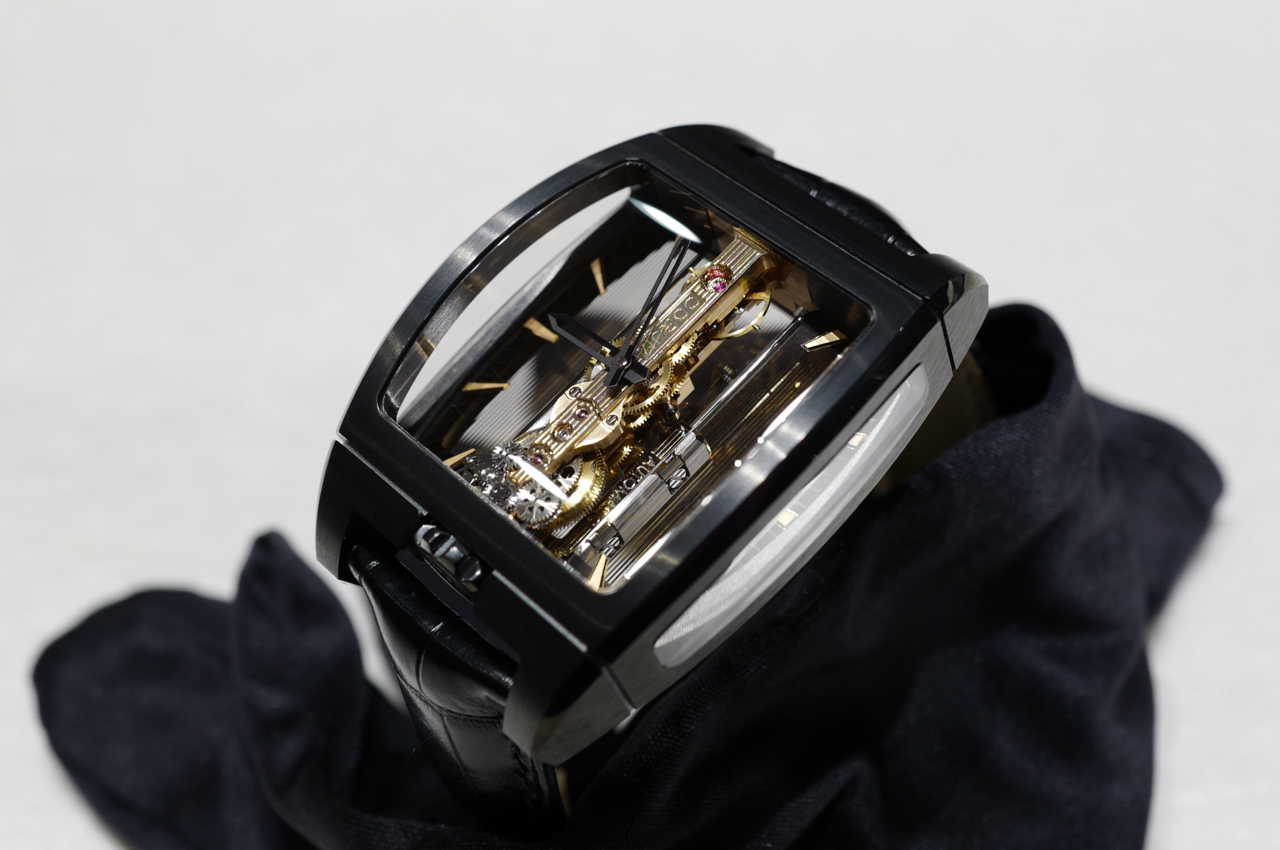 Constructed in a tonneau shaped case of brushed and polished black DLC titanium, with side panels and internal layers of sapphire crystal exposing its extraordinary inner workings, the stunning Golden Bridge Automatic men’s watch is one of the Corum brand’s most enduring and well loved collections.

Never known for reserved understatement, Corum are synonymous with daring, avant garde styling, whose appeal has earned the company an almost cult status among collectors who prefer something different to the mainstream, and the Golden Bridge collection is no exception to that unwritten rule.

The Corum Golden Bridge Automatic is an extraordinary watch with enormous presence, in a brooding black titanium case with sapphire side windows and 3 dimensional sapphire dial, it is a stunning glasshouse showcase for an evolution of a legendary watch movement, and the focal point of the piece.

With its rose gold gear train and bridges packed into a slender, hand decorated linear mechanism, the movement itself formed the ‘bridge’ as it spanned the length of the dial. Using an ingenious sliding weighted carriage which shuttles up and down its length, the original movement has been modified from manual to self winding, but the spinning rotor which is associated with automatics is dispensed with, as the motion of the carriage provides the energy which maintains the power reserve whilst on the wrist, in an eyecatching display in the centre of the dial.

As a consequence of the movement’s top to bottom configuration dictates that the winding crown be relocated to the midpoint between the lugs.

Quite unmistakable in its appearance, an expansive gently domed sapphire crystal spans the 37.2mm width and 51.8mm length of the brush grained black DLC titanium case. Its surfaces have been finished with brush graining on the integrated bezel and upper surface, and polishing on the sides, cut away for a pair of sapphire windows, which offer a wonderful lateral view of the mechanism within.

Beneath the sapphire, the dial as such is composed of opposing sapphire ‘shelves’ upon which the tapering rose gold hour makers are affixed, effectively creating the illusion that they are floating in suspension. The movement too is finished in rose gold which makes for an elaborate display, full of contrast, shadows and three dimensional depth. Black titanium hands are skeletonised and taper sharply at their tips.

Underneath, the sapphire caseback is shaded using etched parallel gold lines which frame the underside of the virtually fully exposed movement.