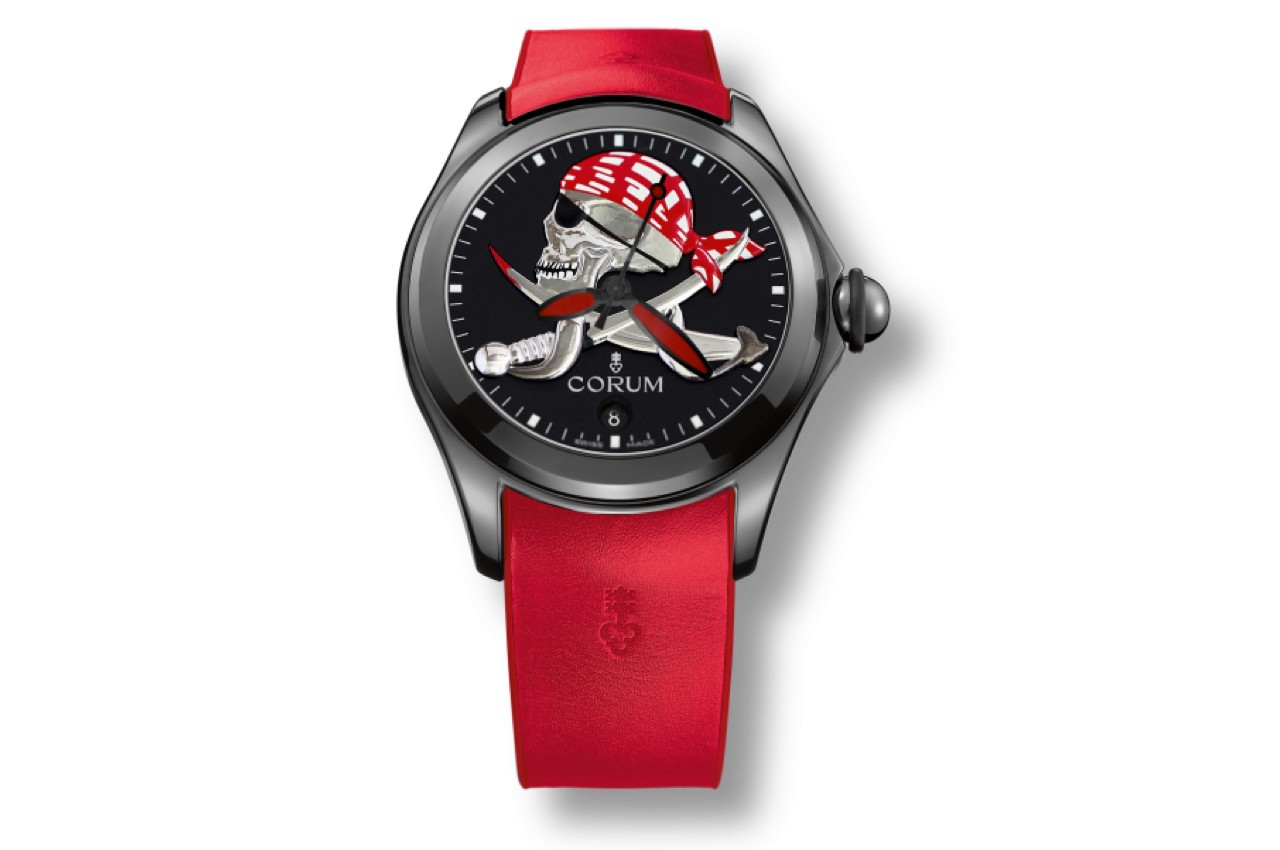 Who wouldn’t have a soft spot for the Corum Bubble watch? Unmistakable in its design, extroverted in its personality, and fusing the serious business of watchmaking with an unabashed sense of fun and frivolity, it has been an icon beloved around the world since it was introduced to herald in the new millennium, almost twenty years ago.

It was then discontinued only a few years later, but it had already made its mark, and it was to a hero’s welcome in 2015 that the famous Corum Bubble made its return, and if it was big, bold and beautiful originally, then if anything it’s already exaggerated dimensions, and lovable but dominating personality have been supersized even further in almost every way.

In a brooding black PVD stainless steel case with matte finish, presented on a vivid red rubber strap, and topped off with the most outrageous dome of sapphire crystal ever used on a production wristwatch the Bubble 47 Pirate is a swashbuckling piece indeed, and perfect for the party-loving socialite who likes to stand out in the room. It will surely do that.

The jet black dial is dominated by the silvery skull motif with crossed cutlasses, complete with red bandana and black eye patch. It’s applied to the dial so it sits slightly proud of the dial floor, its silvery relief effect adding a three-dimensional look to the face of the watch. The stout steel hands are filled with red Super-LumiNova which stand out clearly in daylight, and glow in low light conditions, so legibility is good when looking down directly onto it, as the crystal is so thick, that it distorts the dial wildly from any other angle.

At 47mm across and 20mm tall, the rounded shape packs enormous presence on the wrist. Its contours and lines are smooth and continuous, and almost irresistible to the occasional subconscious fingertip caress. The big round crown needs a tactile O-ring of black rubber for grip while curving lugs and a case-hugging red rubber strap contribute to making the watch sit comfortably on the wrist, despite its exuberant proportions. And being rated to 100m water resistance, it’s ready to get wet too.

A truly spectacular piece in size, color and character, the Corum Bubble 47 Pirate is presented on a red rubber strap and it is secured to the wrist with a robust pin buckle.